After Trump, the hate will remain.
By Jay Neugeboren
Donald Trump
Election 2020 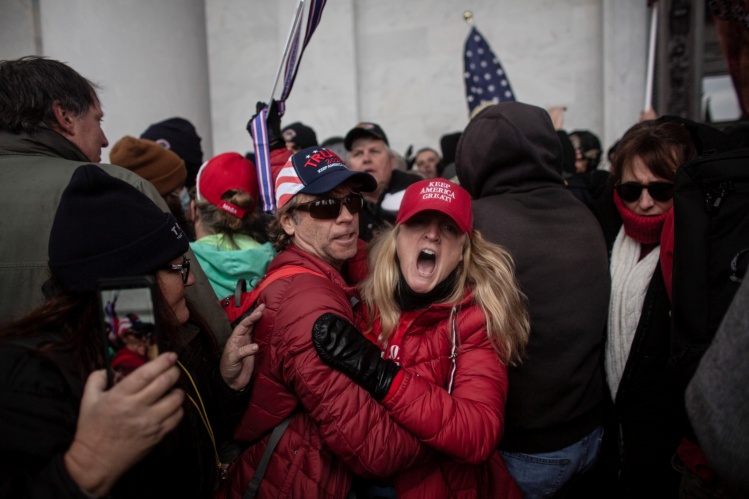 Four months before the Republican National Convention of 2016, Donald Trump warned the nation that his supporters would respond with “riots” if he did not win the presidential nomination. “I think you’d have riots,” he said. “I think you’d have riots. I’m representing a tremendous many, many millions of people.” Earlier in the campaign he called on supporters to “knock the crap out of [protestors],” lamented the lack of “consequences” for those who interrupted his events. In old times, he added, such protestors would be “carried out on a stretcher.”

And now, after Trump lost the 2020 election and told those who invaded and ransacked the Capitol, “We love you. You’re very special,” we have, full throttle, the riots—and violence—he prophesied and, by his words and acts, incited. Although we may, thanks to the presence of more than twenty-five thousand armed troops at Joe Biden’s inauguration, prevent and/or subdue new riots in our nation’s capital, we are inheriting something at least as dangerous—and, perhaps, more insidious—than the palpable acts of violence we have already experienced.

“I wonder all the time what sort of world is going to come out of this,” the writer and war correspondent Martha Gellhorn wrote to Eleanor Roosevelt in 1941 on the eve America’s entry into World War II. “The great crime the Nazis have invented is this one of filling the world with hate, because the hate will stay like an infection in the blood, even after the killing is over.”

And so too in our time. On January 7, the day after the invasion of the Capitol, the conservative preacher Jeremiah Johnson, who, like many Evangelicals, had been a fervent Trump supporter, apologized publicly for having supported him. The reaction? “Over the last 72 hours, I have received multiple death threats and thousands upon thousands of emails from Christians saying the nastiest and most vulgar things I have ever heard toward my family and ministry,” Rev. Johnson reported. “I have been labeled a coward, sellout, a traitor to the Holy Spirit, and cussed out at least five hundred times.” He was, he added, “flabbergasted” by “the pure hatred being unleashed.”

What may be new to our times is the seeming license individuals and groups now have to shamelessly spout hatred and foment violence.
sharetweet

With rioters chanting “Hang Mike Pence” and issuing calls to kill Capitol policemen with their own guns, dare we shy away from what their hate-filled outcries against Nancy Pelosi, Alexandria Ocasio-Cortez, and Mike Pence might have led to had the rioters, in their frenzied madness, been able to get to these individuals?

We are not strangers to the hate that has fired the murderous actions of the Nazis or, on our shores, the KKK and other racist, anti-Semitic, and anti-immigrant groups and individuals. But what may be new to our times is the seeming license individuals and groups now have (i.e. Charlottesville!) to shamelessly spout hatred and foment violence, for they do so with the encouragement and the blessing of a man who, these past four years, has been the most powerful man in the world. According to the New York Times, those who track hate groups say that the attack on the Capitol “served as a propaganda coup for the far right,” and is, regrettably, likely to “fuel” recruitment and violence “for years to come.”

And those who are hated by Trump and his followers are filled with their own portions of hate too, so that, without apology or embarrassment, I hear friends, colleagues, and relatives who deplore the events of January 6 talk about wishing harm—death and pain, in debilitating, damaging, disfiguring, and violent ways—to the departing president.

Politicians and pundits talk of “healing” a divided nation; of “unity” in a time of crisis; of the hope, optimism, and spirit that have, throughout our history, inspired the better angels of our nature. “Donald Trump’s inhumanity, his sick torrent of lies and incitement came to its inevitable, shameful end on Wednesday,” Maureen Dowd wrote in the New York Times, “when a mob smeared blood, excrement, hate and death all over the Capitol.”

But I wonder. For the vulgar, violent acts we’ve witnessed and the nasty, mean-spirited rhetoric we’ve heard, as alarming as they are sobering, have been with us for far too long, and so do not, alas, promise to go away swiftly or peacefully.