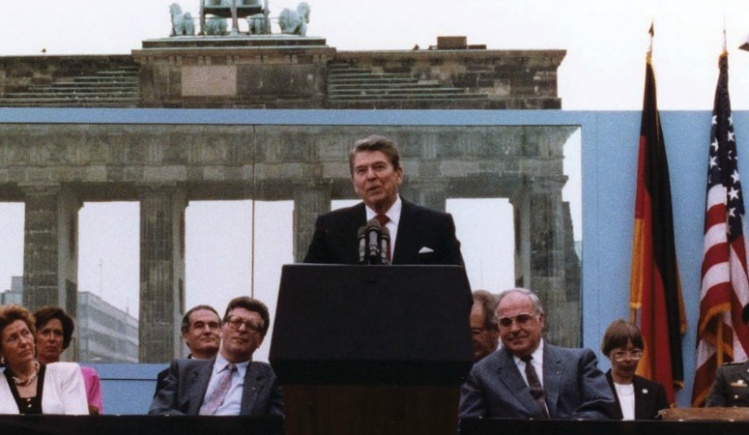 "The best a statesman can do,” quipped Otto von Bismarck, “is listen to the footsteps of God, get hold of the hem of His cloak, and walk with Him a few steps of the way.” Put in modern terms, the aperçu was an elegant way of saying that the shrewd policy strategist perceives the trend of history and positions himself accordingly. In Making the Unipolar Moment, foreign-policy historian Hal Brands investigates how such an outlook inspired American strategy as the Cold War era wound down, helping to create a world order that placed the United States alone at the helm.

Brands’s inquiry begins in the 1970s, when American confidence had been shattered in the wake of numerous crises and embarrassments: oil-price shocks, a disastrous war in Vietnam, and increasing volatility in the Middle East, including the humiliating fate of fifty-two Americans held hostage in Iran for 444 days. Pundits proclaimed the end of American power, and a demoralized public doubted the nation’s ability to lead the world. And yet by the 1990s, the United States was, as historian Melvyn Leffler puts it, the world’s “preponderant power”; the Soviet Union had collapsed, leaving the United States not only the sole military and economic power of the world, but the leading ideological force on the global stage. How did such stability arise from the morass of the 1970s?

To answer this question, Brands reinterprets received wisdom about that dreary decade. Although the United States faced serious—and obvious—challenges, he shows that the global environment was in fact becoming amenable to American interests in new and subtle ways. The Soviet economy was gradually imploding, new and more democratic governments were set to emerge, and the global capitalist economy was expanding. However difficult to discern at the time, global “undercurrents” were shifting in America’s favor.

These structural potentials, however, required a strategy. In the Carter, Reagan, and Bush administrations, American leaders perceived the favorable trends and seized on them to construct a world order that benefited the United States. Brands sees Reagan as the architect-in-chief of the emerging post–Cold War order, arguing that Reagan deployed a variety of tactics designed to play to U.S. strengths and target Soviet weaknesses—increasing defense spending, arming third-world militias, and enforcing free-trade policies through the International Monetary Fund. As Brands tells it, “Reagan’s strategic goal...was not simply to wage Cold War more effectively. What he sought was leverage that would allow him to wind down that conflict on advantageous terms.”

While Brands allows that Reagan’s strategies contained “moral failings”—alliances with brutal dictators and militias, for example—he believes that Reagan acted in the best interests of the nation by decisively establishing American supremacy. His successor, George H. W. Bush, was able to reap the fruit sown by these actions. Orchestrating the unification of Germany, inviting former Soviet republics into the new world order, and bulking up NATO, Bush rode the accelerating wave of American success even as he contributed to its pace.

BRAND WISELY GIVES attention to the role of “soft power”—influence exercised through culture, diplomacy, or ideology, rather than military pressure—and makes a convincing case that American unipolarity was unlike anything the world had seen before. Not only did the United States dominate militarily and economically; with the collapse of communism, neoliberal democracy in the American style became the only workable global ideology. Yet Brands intends his narrative, with its emphasis on the making of the unipolar moment, to serve as a corrective to those triumphalist writers who, in the wake of the Soviet Union’s disintegration, have viewed Western political ideas as unchallengeable and Western global dominance as inevitable. At the same time, he also admonishes those who treat the rise of American unipolarity as the result of mere chance. Making the Unipolar Moment deftly demonstrates that sophisticated and strategic policy interacted with international conditions to produce the post–Cold War outcome. Without one or the other, the story would likely have been different.

The bright portrait of Reagan that Brands paints will challenge liberals and others invested in a less rosy view. The seemingly unquestioned assumption behind this endorsement is that American leadership is obviously good for the rest of the world. And as much as Brands insists that we should resist an inevitablist view of American dominance, his writing actually encourages the opposite, suffused as it is with references to the “pace” and “flow” of history, the “acquired momentum” of historical trends, and policymakers’ “riding the tidal wave of history.” He states baldly that “if the United States did so well during the 1980s, it was because it had the impetus of history at its back.” Although he does not say it explicitly, in congratulating Reagan for his prescience, Brands implicitly embraces something like the Hegelian “spirit of history,” and views the United States’ seizure and consolidation of global power as the fulfillment of this spirit.

If Brands believes that an American-led world order conduces to prosperous stability in the world, how does he make sense of today’s global volatility? Did not many of the crises that plague us—international terrorism, violence in the Middle East, South American poverty—arise in part from the policies of the 1980s? Brands allows that “the reassertion of U.S. power had its contradictions,” and that “American strategy helped lay the groundwork for crisis and conflicts to come.” But he is undeterred in his ultimate view of the wisdom of these policies. “Successful strategies,” he reminds us, “always have negative by-products.” True enough. But a tree is known by its fruit; perhaps these crises aren’t merely regrettable “by-products,” but rather the consequences that necessarily result when a world is shaped by one dominant power.

Brands insists his book is not meant to be a global history, but he is to be credited for coming quite close. Making the Unipolar Moment weaves military power, economics, and cultural influence together compellingly. The scope of the book is impressive, and its thorough explanation and direct prose make it a pleasure to read. Yet while Brands capably demonstrates the interaction of structure and strategy in the creation of the post–Cold War order, he fails to question his own assumptions about the role of American power. Did U.S. strategy at the end of the Cold War truly grasp the cloak of God? Brands will likely convince the reader of the historical importance of an intentional grand strategy in shaping global events. But the desirability of this grand strategy remains in question.