'The Making of Assisi'

The Pope, the Franciscans, and the Painting of the Basilica
By Ingrid D. Rowland
Books
Religious Life 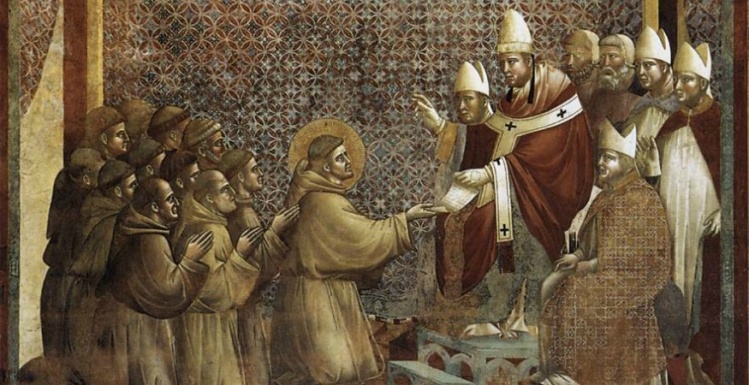 From its dominant position on a ridge of the Apennine peak known as Mount Subasio, the Basilica of St. Francis in Assisi is as large and impressive as Francis himself was apparently small and unprepossessing. Graceful, majestic, gorgeously decorated by some of the greatest artists in medieval Italy, it may seem to contradict the devotion to poverty that drove Francis to create a new way of religious life for the Friars Minor, his “little brothers” in faith, and his female followers, the Poor Clares. And yet, as Donal Cooper and Janet Robson show in their fascinating study, The Making of Assisi, the basilica played its own crucial part in promoting Francis and his mission, conveying the “Little Poor Man’s” novel view of right living to a larger public through a brilliant interweaving of art, architecture, and liturgy.

The basilica as we have it was the creation of the first Franciscan pope, Nicholas IV, elected in 1288. Francis himself had been a saint for exactly sixty years, canonized in an extraordinarily rapid procedure just two years after his death in 1226. Pope Nicholas, the former Girolamo Masci, was born in 1227, a child of the same rugged Apennine region as Francis, a region that felt the impact of the saint’s recent presence with particular intensity. Nicholas emerged victorious from the conclave on February 22, 1288. By mid-May, he had posted letters to the head of the Franciscan province of Umbria and the custodian of the basilica at Assisi granting them explicit permission to use the alms they collected to ensure that the Basilica and its associated churches and convents were “maintained, repaired, built, modified, enlarged, finished, and decorated.”

Clearly, reinforcing the Franciscan order and the principles of its founder ranked high among the new pope’s priorities. He was only the first in a long, distinguished series of Franciscan popes who used art, architecture, and urban planning to transmit spiritual ideas: the great Renaissance popes, Sixtus IV (who built the Sistine Chapel), Julius II (who asked Michelangelo to decorate it), and Sixtus V (who moved four of Rome’s obelisks to their present location) were also Franciscans. St. Francis had restored dilapidated churches and chapels with his own hands, beginning with the little parish church of San Damiano on the slope below Assisi. His successors felt that, in essence, they were simply performing the same action.

Pope Gregory IX laid the cornerstone for Assisi’s basilica in 1228, shortly after Francis was canonized. Work proceeded rapidly thereafter. By 1253, the basic structure of San Francesco seems to have been largely complete, a two-level plan that took advantage of the steep slopes of Mount Subasio to provide two separate entrances to two different spaces for worship of two distinctive kinds. On a lower level, entered from a spacious courtyard, the Romanesque crypt of the lower church centered on the saint’s tomb. Directly above, in ultra-modern Gothic style, the lofty nave of the upper church, with its own separate entrance, focused on a ceremonial bishop’s throne.

With his letters of 1288, Pope Nicholas gave the Franciscan province of Umbria and the friars of Assisi permission to think about their mother church in a whole new way. He elevated the basilica’s status to that of a pontifical church, so that its bishop’s throne became a seat reserved exclusively for the Bishop of Rome—but this transformation meant that little Assisi was a place where popes might want to travel. In the next twenty years, the Friars Minor of Assisi would transform their basilica into a masterpiece of Franciscan storytelling, covering the vaults and walls of the upper basilica with large-as-life frescoes of episodes from the saint’s biography, carefully chosen to present Francis in a light that reflected the enthusiastic concerns of Nicholas, the Franciscan pope.

As Cooper and Robson reveal, Assisi was not the only place where Pope Nicholas commissioned a monumental pictorial tribute to Saint Francis and his brethren. The new pope also ordered a thorough remodeling of the ancient basilica of St. John Lateran, Rome’s (and Catholicism’s) official mother church, consecrated in the year 324. To decorate an entirely new apse, set farther back than its predecessor, Nicholas ordered a mosaic showing Christ in glory above a row of titanic saints: Paul, Peter, the Virgin Mary, John the Baptist, John the Evangelist, Andrew. In among these towering figures, at a little over half size, stand two Franciscan saints: Francis and Anthony of Padua, who had died in 1232 and was canonized less than a year later, even more quickly than Francis himself. In no uncertain terms, the Franciscan pope proclaimed the arrival of the Friars Minor in heaven as well as on earth.

Sadly, a well-meaning pope, Leo XIII, tore down the original apse of St. John Lateran in the 1880s and replaced its glorious mosaics with modern copies. Medieval mosaics were set unevenly, to reflect tiny, scintillating points of light, but nineteenth-century mosaicists, like the ancient Romans, preferred a flat, smooth surface. As a result, the current apse of St. John Lateran is a flatter, duller work of art than its thirteenth-century predecessor, and so is the frescoed upper church of Assisi, its painted plaster hopelessly faded after so many centuries of exposure. They are dazzling nonetheless, and one of the many virtues of The Making of Assisi is a generous complement of color plates to give readers a sense of how glorious the vision of Pope Nicholas must have been.

The artists who executed these mosaics and frescoes were the best that Nicholas could find: Italians, trained from childhood in a master’s workshop and carefully guided by master and guild through the various levels of professional competence. The thirteenth century was a time of inspired artistic experimentation in Central Italy, where painters, sculptors, architects, and mosaicists could, and did, draw on a variety of sources: the ancient Romans, the Etruscans, the Greeks, Byzantium, the Arabs, as well as idiosyncratic local traditions. Payments were carefully recorded in ledgers of paper or parchment, but Napoleon Bonaparte carted off the documents for the upper church when he invaded Italy, and most of them were destroyed somewhere between Assisi and Paris. We know that Cimabue, the crusty Florentine painter, worked on the vaults of the upper church (his nickname referred to his temper, aggressive enough to “decapitate an ox”); we do not know for certain whether he brought along his most brilliant pupil, Giotto di Bondone, the man his contemporaries hailed as the inventor of modern painting. There are some strong similarities between the Assisi cycle and a similar Franciscan cycle in Florence that is definitely by Giotto (the Bardi Chapel in the Church of Santa Croce), but there are also significant differences.

No matter who created them, the figures in the paintings have a wonderful, regal presence; in their day, they must have seemed almost like tableaux of living figures mysteriously carrying out their activities in three dimensions on the flat surface of the wall. The stylized backgrounds showing cityscape and countryside may be inspired by the stage sets of contemporary miracle plays; in any case they are sophisticated, carefully conceived designs. In between the various scenes from the life of St. Francis, painted architectural frames boast fanciful Gothic versions of Classical columns. The ancient classical world is not so far away from the upper church of Assisi; neither is the impending Renaissance.

Because the question of Giotto’s participation at Assisi is as insoluble as it is hotly debated, Cooper and Robson have decided to dodge the question entirely and concentrate instead on what the paintings of the upper church might have meant to Nicholas and to contemporary viewers. (Their general inclination is to think that the frescoes are not the work of Giotto, which means in turn that we should expand the number of first-class artists active in thirteenth-century Italy to include this unknown master.)

What we certainly see is a Francis who is more self-assured and more consistent in his actions than the Francis who emerges from his medieval biographies—a troubled, driven soul who felt an irresistible call from God but spent much of his life as a “poor man” trying to discern just how he and his followers could best answer that call. Saints’ lives, like classical myths, could be shaped to tell truths higher than the plain recitation of fact. Francis probably never stripped naked before his father in the main piazza of Assisi, declaring that he had another father in heaven; the break was more private than that. But the scene on the upper church of Assisi makes the basic, valid point that Francis rebelled against his father’s capitalist view of the world by presenting a scene of searing power: the young convert has taken off all his clothes as his father, the prosperous merchant Bernardone, clenches a fist in rage. As Bernardone’s friends restrain him, the bishop of Assisi, Guido, wraps a handsome blond Francis in his cloak (the real Francis was short and dark) and spirits him away toward the cathedral, with its distinctive ancient façade (it had begun its existence as a temple of Minerva). Bernardone, a prosperous man who had drastically improved his own social standing by hard work and consistent behavior, would never understand his son’s rejection on any level. The fresco in the upper church brings that bewilderment home as if it were happening now, before our eyes; Francis, in the meantime, looks beatifically upward, rapt in another world while confusion roils around him.

Cooper and Robson show how each scene on the wall of the upper church forges a bond with each of the scenes around it, but also the scenes on the opposite wall, over the doors, in the vaults, in the apse. This complicated web of references provides countless occasions to ponder the meaning of each episode in the saint’s life on its own merits, but also in relation to his other actions, and finally for its significance in the life of the institutional church. A social rebel, Francis always professed obedience to the pope; the decorative schemes commissioned by the Franciscan Pope Nicholas in the Lateran and Assisi emphasize that loyalty, daring to rank the achievement of Francis and the Friars Minor alongside the work of the Apostles.

Like all charmed moments here on earth, the Franciscan honeymoon brought on by the election of Pope Nicholas IV could never last. Nicholas died in 1292, four years after issuing his letters to the friars of Assisi. His successor was Pope Celestine V, who served for five months, the last pope to resign his office before Benedict XVI in 2013, and under radically different circumstances. Work continued at Assisi under Celestine’s successor, Boniface VIII, but the spirit of that worldly-wise, political pontiff led elsewhere and meant other things. The making of Assisi was a brief flash of inspiration that we are fortunate to have largely preserved (despite the terrible earthquake damage in 1997), and beautifully detailed in this superb book.