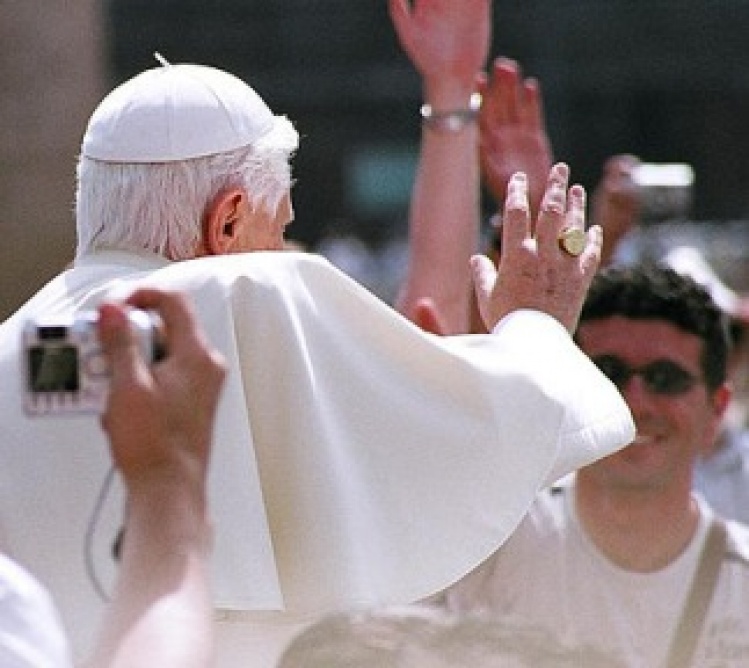 In our 2005 series of articles titled “What Next?”, Commonweal asked several writers to look at the challenges the then newly elected Benedict XVI was likely to face. Following Benedict’s announcement that he would resign as of February 28, we checked back in with those writers to get their thoughts on whether the hopes they laid out eight years ago have been realized.

Featured today is Cathleen Kaveny, who teaches law and theology at the University of Notre Dame. Her piece, “My Meeting with Cardinal Ratzinger,” appeared in the May 6, 2005, issue of Commonweal. (Previously in this series: Margaret O’Brien Steinfels, Robert P. Imbelli, and Richard R. Gaillardetz.) When I re-read what I wrote eight years ago in "My Meeting with Cardinal Ratzinger, " I winced. I told a cute little story about Ratzinger's joking remark to me: "A Catholic studying moral theology at Yale? You'd better be careful or you'll have the Congregation after you!"

That story does not seem nearly so cute now, in light of the Congregation's condemnation of Sr. Margaret Farley's book, Just Love. Farley, of course, was for many years the only Catholic teaching Christian Ethics at Yale Divinity School. She is one of the holiest people I know.

Thinking about Pope Benedict's papacy leaves me saddened and perplexed. His aim, he says, is to lead people to Christ, and to appreciate the intellectual and spiritual riches of the Catholic Christian tradition.

Margaret Farley's goals, in my view, have been similar--but she has been working in an ecumenical and secular context, which is very different from the Vatican. In a situation in which so many young people are rejecting Catholicism, even rejecting Christ, because they see Christianity as entwined with an unjust and unworkable sexual morality, would it not have been a better strategy to open a less adversarial conversation with Farley? Or is the pope so sure that fidelity to Christ is so absolutely entwined with the traditional sexual morality that he would rather those who disagree with him walk away from Christ and the church rather than have an open discussion of these maters? Perhaps he is. But then other popes have been equally sure that fidelity to Christ was absolutely opposed to any democratic form of government, or any principled separation of church and state. How many people were been driven away from Christ and the church by what turned out to be hubris and fear, not divine certainty?

My concern is not that Pope Benedict doesn't agree with progressive views on gender and sexuality. It is, rather, the attitude that he takes toward disagreement with different segments of the body of Christ. I do not understand the priorities of a papacy that ruthlessly targets prelates who are prepared to talk about women's ordination, while doggedly pursuing reconciliation with virulently anti-Semitic priests and bishops. No amount of gentle, pious exhortations about the importance of God's love, or the centrality of the Gospel, can make sense of this incredible disjunction for me.

Joseph Ratzinger is resigning the papacy because, he says, he can no longer physically and mentally bear the burdens of office. I have to wonder what would have happened had he resigned a lesser office as a younger man. In 2001, when he was Prefect of the Sacred Congregation for the Doctrine of the Faith, he assumed responsibility for investigating the sexual abuse of clergy by minors. In this context, he saw the mounting allegations against Marcial Maciel Degollado, the twisted founder of the Legionnaires of Christ. Blinded by the charismatic, ostensibly faithful priests Maciel commanded, and welcoming the material support he provided to the Vatican's interests, Pope John Paul II thwarted all investigations into Maciel's actions. But Ratzinger knew better--he had read the files. What would have happened if Ratzinger had resigned his prefecture in protest against the cover-up? Would such a radical move of civil disobedience have lanced the festering wound, and allowed the healing to begin earlier?

We will never know.

(Previously: Margaret O'Brien Steinfels, a former editor of Commonweal, who writes frequently in these pages and blogs at dotCommonweal. Her piece, “Is the Papacy Obsolete?”, appeared in our May 6, 2005, issue.) Expectations for Benedict’s papacy were never high, probably even among conservatives who were relieved to see a close collaborator of John Paul II succeed him. Liberals anticipated nothing more than continuation of policies that had stemmed the tide of Vatican II and turned a blind eye to structural corrosion and bad governance. Given those expectations, Benedict disappointed no one. The singular surprise has been his resignation. For this, we should all be grateful, his successors especially.

In 2005, when I commented on his election, my advice to Benedict was “loosen up.” I was referring to the appointment of bishops and the state of the local church. I wrote then that the bishops are the point “where the local church meets the Vatican [and where] the engine of Catholicism ha[d] seized up.” Then and now, the U.S. bishops are “seriously hampered by their lack of credibility and authentic authority.” If anything, the situation has gotten worse: The clerical sex abuse crisis keeps turning up in the headlines, while the bishops have painted themselves into a corner over contraceptive coverage in the new health care regulations and their crusade for a “Fortnight for Freedom” last summer was all leaders and no troops.

John Paul and Benedict between them have put an end to the robust sense of collegiality that the U.S. bishops once practiced; that collegiality fostered a coherent sense of the church and made the bishops conference an effective voice not only among Catholics but also in the public square. No more.

To Benedict’s successor: Better bishops attuned to the true needs of the local church will not resolve every problem facing the Catholic Church, far from it, but better bishops would go some way in curtailing the lemming-like march over the cliff.

(Previously: Rev. Robert P. Imbelli, a priest of the Archdiocese of New York and an associate professor of theology at Boston College. His piece, "Shepherding the Church," appeared in the May 6, 2005, issue of Commonweal.)

Re-reading my remarks of eight years ago, I am struck that, while speaking of hopes for the new pontificate, I intentionally extended those hopes to the challenges facing all of us in the Church. We are ever ready to assess the performance of a pope, but I think spiritual discernment requires honest self-assessment as well. I expressed the hope for a new appropriation of “mystical knowledge of Christ.” Pope Benedict has more than fulfilled this hope. The oft-cited statement in his first encyclical, Deus Caritas Est – Christianity is not a set of ideas or a moral code, but a living encounter with the living person of Jesus Christ – has been the cantus firmus of his magisterium. He has developed this theme in creative variations from his magnificent volumes on Jesus of Nazareth to his mystagogical homilies and catecheses.

These are a heritage we will continue to harvest for years to come.

I also spoke of the urgent need to foster a “spirituality of communion” without which necessary structural reform would be merely bureaucratic tinkering. I think the pope has been eloquent in his articulation of the dimensions of such a spirituality. However, he has been less successful in furthering the sort of institutional reform that can reflect and serve this spirituality.

I did not, in my original reflection, dismiss the question of “management,” and its role in promoting greater “accountability and transparency.” But Pope Benedict’s gifts and background did not prepare him adequately to undertake this “managerial” task. Often he was not well served by some of his collaborators.

However, a spirituality of communion does not seem greatly in evidence in the many rancorous and partisan exchanges that mar discussion of the church among Catholics and in the media. Hence, we all too often remain a people polarized and adrift.

(Previously: Richard R. Gaillardetz, the Joseph Professor of Catholic Systematic Theology at Boston College. His piece, “Looking Ahead: My Hope for the Next Pope,” appeared in the April 22, 2005, issue of Commonweal.)

My deepest hope for the new pope was that he would take to heart two basic insights from the teaching of Vatican II: 1) that the Word of God was addressed to the whole church and not just the hierarchy, and that therefore the whole church must play a part in the ongoing reception of God's Word; and 2) that we belong to a pilgrim church that will not be perfected until the eschaton, and that therefore demands the virtue of eschatological humility. These were only partially realized. Regarding the first, one can justly say that this theologian-pope has made the Word of God, incarnate in Jesus Christ, central to his papacy. His encyclicals and addresses offered rich meditations on the transformative power of that Word in the church, and through the ministry and mission of the church in the world. Regrettably, this pontificate has done nothing to expand our awareness that the whole church plays a role in the discernment of God's Word. The creative work of both theologians and religious communities (particularly women religious in the United States) to discern echoes of that Word in the lives of ordinary believers, in the plight of the oppressed, and in conversations with new insights from the natural and social sciences have often been met with suspicion and indiscriminate condemnation. There has been no discernible effort to develop structures whereby church leaders themselves might better learn from the insights and concerns of ordinary believers.

Regarding the second, the pope demonstrated the eschatological humility I had hoped for in his courageous decision to resign. It constituted a recognition of his own limitations and frailties and implicitly acknowledged that God's grace cannot supernaturally compensate for infirmity and flagging energy. There was little if any recognition that this same virtue should govern the church itself. Church leadership under Benedict XVI continued to grant absolute status to all teaching without distinction. Sadly lacking was a humility in the church's teaching office that could recognize the distinction between the eternal and the contingent, the essential and the peripheral. Benedict acknowledged the failings of priests and bishops regarding the sexual abuse scandal, but refused to discipline prelates who were most culpable. Few Catholics can make sense of the fact that Bishop William Morris of Tawoomba, Australia, was removed from office for calling for a prayerful reconsideration of church doctrine and discipline regarding candidates for the priesthood, while Bishop Robert Finn, convicted in a court of law for criminally neglecting to protect children by reporting a priest child abuser, remains in office without censure.

It is difficult to avoid the conclusion that what we have seen over this waning pontificate is a church more concerned with narrowly construed conceptions of orthodoxy and the avoidance of public scandal than a church humbly aware of its failings and its dependence on the redeeming grace of Christ.

A Kind of Justice