Living in the Middle 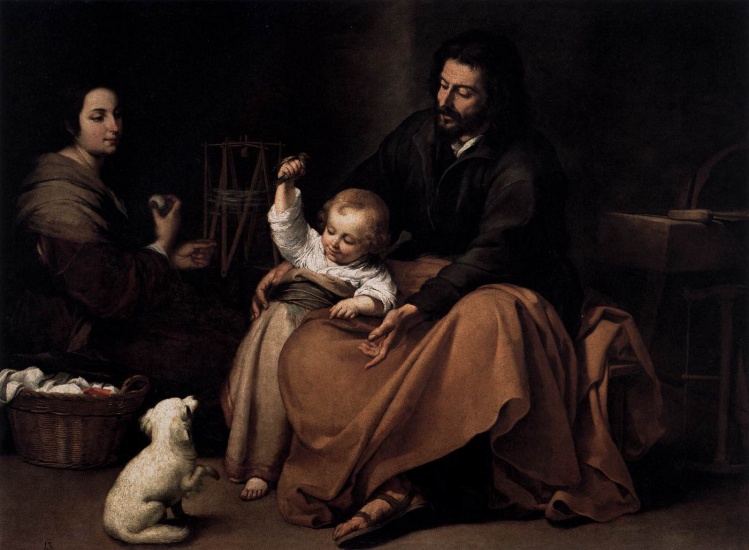 When I was a child, I resolved to love Joseph. This was, in part, contrarianism. Mary felt like the person I should love as a child—because of her higher profile, of course, but also because Mary was a woman and I was a girl and so there was a degree of species resemblance. Joseph was not a woman, and no one I knew really cared about him, so he could be “mine” in some sense—a way of distancing myself from gender expectations, and perhaps a sign of my superior taste and judgment. (None of these things were true.)

But I still love Joseph. I’m not sure more is asked of anybody in the Nativity story—Mary included. Unlike Mary, Joseph is unnecessary. You can imagine an alternate Gospel in which he simply walks out. And he certainly disappears quickly enough from the story. He doesn’t show up with Mary to mourn his son’s death. There’s not a similarly rich tradition of art for him as for Mary.

What distinguishes Joseph isn’t his obscurity, but the quality of his faith. Joseph doesn’t see angels; they appear to him only in dreams. Joseph doesn’t conceive in virginity; but he does make the choice to believe such a thing can occur, however unlikely it might be. Nearly everything that happens to him leaves room for doubt. Joseph’s choice is to step past the doubt, to uproot his life over and over because he’s willing to believe even when not compelled to do so by direct experience.

Joseph, in other words, is us.

Joseph’s feast day often falls, as indeed it did this year, during Lent, which seems fitting. But the day that’s always reminded me of Joseph is actually Holy Saturday, perhaps my favorite day of the year. Much like how Joseph is a part of the holy family, but easily erased from it, Holy Saturday sits right between two days of supreme importance, as if the day has little to offer other than that it’s a mandatory period of waiting—holy filler.

But I’m not sure I understood something important about Holy Week before I noticed Holy Saturday. The first Holy Saturday I remember really observing was a beautiful day; I took a long walk through the town where I lived, ate a platter of eggs and buttered toast at a diner. The world felt pregnant, full of secrets, and I had the sense that beneath my feet and in the air around me something tremendous was taking place. (In a certain prosaic sense, this was true: it was, after all, spring.)

Something about this day’s suspended state represents an important truth about our lives as we are living them, the state of anticipation which being a Christian entails.
sharetweet

It wasn’t a particularly happy time in my life—I was broke and sure I was going nowhere. But I walked through the day with a sense of peace, or at least, quiet anticipation.

Something about this day’s suspended state represents an important truth about our lives as we are living them, the state of anticipation which being a Christian entails. It is, indeed, a day that exists for us to move through. But that’s what life is, too—lived, for Christians, between Easter as a historical event and Easter as a future promise. Holy Saturday is the day in which we see our lives in their proper context.

To some extent, this observation is a commonplace. Hans Urs von Balthasar understood Holy Saturday as the time in which Christ actually enters Hell and experiences the ultimate despair of separation from God. Without experiencing this last privation, Christ can’t fully encompass humanity. More simply—and perhaps more plausibly—Alexander Schmemann wrote: “Is not the wonderful quiet of Great Saturday the symbol of our very life in this world?”

There’s a painting by Bartolomé Esteban Murillo of the Holy Family; Joseph gently holds Christ as the child plays with a dog. Mary, with a look of amusement, watches them. It’s a lovely scene, perhaps because nothing special is happening in it. No great deeds are being performed or prophecies fulfilled. It’s just a child at play, watched over by his father who is not his father, but who has taken on this strange duty nonetheless. A day like many days must have been, between Christ’s birth and his Passion, and valuable not simply because it takes a step from one toward the other.

What’s it like to live in the middle, never quite understanding the story into which you’ve been thrust, where you’ve been or where you’re going? What’s it like to have the faith and courage to accept all the things that are asked of you in life, whether or not you ever get to understand them? No person will ever be in precisely the position needed to climb up above human life and see enough to know the answers to these questions.

But in Joseph and Holy Saturday, we are granted images of what our lives are like; that it might be easy to regard oneself as unnecessary, or life as only a period of waiting. And on some level, that might even be true about us and our lives. But it’s not, thankfully, the whole truth.