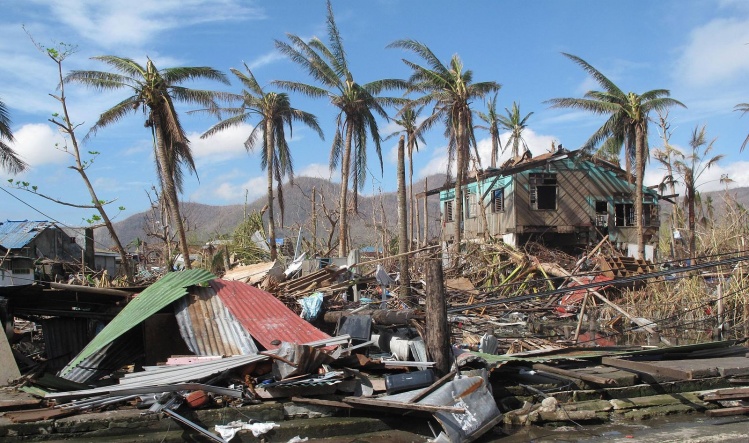 A few palm trees remain standing amid the destruction caused by Typhoon Haiyan in the city of Tacloban.

If you want to see an inspiring example of engagement with Laudato si’—Pope Francis’s encyclical on the environment—look to the Philippines. Catholics in the Philippines, more than anywhere else, have brought this encyclical to life and made it their own.

Laudato si’ was published in June 2015. Within a month the Catholic Bishops’ Conference of the Philippines released a strong statement backing the central concerns of the encyclical: ecology, stewardship, and concern for the poor. Indeed, the effort to combat climate change seemed so important to them that they invoked the Mandatum of Holy Thursday, saying: “caring about climate change and its deleterious and devastating effects on all, but especially on impoverished and struggling nations and communities...is how, today, we must wash each others’ feet.”

Their efforts on the ground reflect the vigor of this statement. Church groups have lobbied for clean energy; fought the spread of polluting industries, deforestation, and mining; engaged indigenous communities in planting trees; and worked for solar-energy access for off-grid communities in poor areas. The bishops have long been concerned for local biodiversity, and they continue to press for its protection. They’ve held educational conferences to unpack Laudato si’, and worked to develop a new mindset of conservation among young people. The World Day of Prayer for the Care of Creation, followed by a month long “season of creation,” has a place in their calendar.

The response of the U.S. Catholic Bishops’ Conference to Laudato si’, by comparison, has been weak, fragmented, and unimaginative.
sharetweet

For a bishops’ conference in a poor country, beset by violence and political upheavals, their commitment is impressive. Whether the ecological initiatives mentioned above have been carried out by a religious community, a diocese, a parish, a “ministry of ecology,” a bishop, or a charitable organization, the banner over all of them has been Laudato si’. They have gone all out for this.

And for good reason. The Philippines, an archipelago in the western Pacific Ocean, is the third most vulnerable place in the world to the ravages of climate change. They are on the front lines for rising sea levels and increased severity of storms. Each year about nineteen typhoons arise in their area and eight to nine of these make landfall. Such storms can be immensely destructive: in 2013 the super-typhoon Yolanda took 6,300 lives. Imagine the effects if there are more of these storms or if they get worse.

The response of the U.S. Catholic Bishops’ Conference to Laudato si’, by comparison, has been weak, fragmented, and unimaginative. The most recent statement on climate change posted on the USCCB website is from 2001. Another document on the site, “Church Teaching on Ecology,” does not even include Laudato si’! It’s true that the USCCB’s chairmen of committees on justice wrote to Trump-administration officials in support of the Paris climate agreement. But instead of full-throated opposition to human actions that contribute to climate change, they invoked a combination of human and natural causes as contributing factors and advocated adaptation to climate change. The conference’s website offers some links to resources for Laudato si’, yet for many of these links a disclaimer pops up saying the conference does not endorse their contents.

Naturally, American Catholics have not been silent on ecology. Religious communities and institutions of higher education, as well as individual dioceses, parishes, and grassroots groups, have mobilized support for the encyclical. But without a firm commitment from the conference of bishops, climate change cannot hope to become a “Catholic issue” in the United States.

You would have thought that Francis’s encyclical made it a Catholic issue, as well as a human, scientific, and global one. They get it in the Philippines. They get it in Ireland, where the bishops have divested from fossil fuels. They get it in lots of places. Here? We’re still waiting.