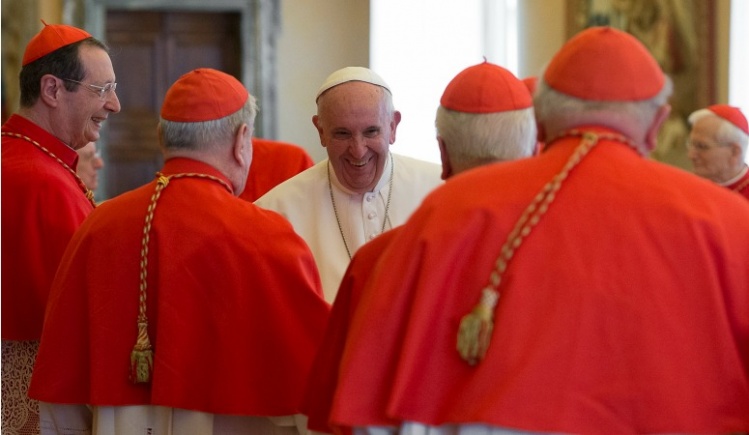 The consistory on November 19, just a day before the last Sunday of the ecclesial calendar, has been described by at least one conservative Italian church writer as “the most liberal in the recent history of the church.”

That’s an interesting observation, but is it true? Has the Argentine pope picked predominantly “progressive” prelates as the latest recipients of the red hat?

Most of the thirteen men who will become cardinal-electors next month (that is, those under eighty and eligible to vote in a conclave) would surely reject that label. They would consider themselves “centrists” at best; many of them would say they are “just Catholic.”

But since the election of John Paul II in 1978 the so-called center of episcopal leadership steadily began to shift.

The late Polish pope began appointing bishops who, like him, saw much of their task as reigning in excessive innovations stemming from the Second Vatican Council (1962-1965). He sharply curtailed the promotion of the reform-minded and outward-looking pastors, as had been the trend under Paul VI.

The center continued to shift, but even more rapidly, under Benedict XVI.

In just eight years as pope, the church’s former doctrinal chief was able to appoint a surprisingly large number of more traditionalist and doctrinaire bishops to key posts in the Vatican and major archdioceses around the world.

Many of these Ratzinger men—some who are already cardinals and a number of others who have been denied the red hat in the current pontificate—have been cool to the priorities and style of leadership adopted by Pope Francis.

Some have held fast to the “cultural warrior” mentality that became characteristic of the pre-Francis years (e.g. Archbishop Charles Chaput of Philadelphia and Cardinal Angelo Bagnasco of Italy). Others have remained fixated on what I call “retrodox” positions on internal Church matters like re-reforming the liturgy (e.g. Rome-based Cardinals Raymond Burke and Robert Sarah).

So compared to the types of bishops on the rise in the past decade or two, yes: Francis’s newly announced cardinals are a very different kettle of fish.

And this would generally be true of the vast majority of the now forty-four electors Pope Francis has put in the College of Cardinals.

After next month’s consistory, this will be the geographical breakdown of the cardinal-electors he has made during his pontificate:

Cardinal-designate Mario Zenari, apostolic nuncio in Syria, slightly changes the equation depending where one places him: he would be the ninth European, the seventh Vatican official, or the seventh cardinal from Asia.

And the nationalities of the other six Vatican officials?

There are three Italians, a German, a French Corsican, and an American Irishman. That means the overall number of Europeans shoots to thirteen, the highest number of electors from any geographical area.

This shows that Pope Francis has cleverly been able to expand the College’s membership to far-flung places without significantly denting the centuries old, but now disproportionate influence of the Europeans.

The pope’s decision to create Archbishop Joseph Tobin of Indianapolis one of the thirteen new cardinal-electors is one of the biggest surprises of the recently announced consistory.

Indianapolis is among the smaller archdioceses in the United States and its close proximity to the cardinal see of Chicago (about 165 miles) made it almost unthinkable that its archbishop would get the red hat.

But by choosing the sixty-four-year-old Detroit native, Pope Francis gets someone who, more than anyone else on the list of thirteen (except, perhaps, Archbishop Zenari), has the greatest experience of dealing with global church issues.

Tobin spent eighteen years at the Rome-based headquarters of the worldwide Redemptorist religious order. The last twelve of those (1997-2009) he was the Superior General. In all those years he travelled extensively around the world, visiting and getting to know his confreres, their work, and the challenges they faced.

In 2010 Benedict XVI named him archbishop-secretary of the Vatican congregation that deals with all the church’s religious orders around the world. And in that position he gained even more knowledge of the issues the church faces throughout the world.

But powerful Americans in Rome demanded that Archbishop Tobin be removed after just two years into his curia post because of his lack of enthusiasm (shall we say) in enforcing a Vatican investigation into American religious sisters. Thus he ended up in Indianapolis.

And in the four years he has been in this modest, yet sprawling Midwest archdiocese, he has won the affection and esteem of people throughout the entire state of Indiana.

But it’s not likely that Pope Francis chose Tobin to be a cardinal simply because he is a bishop on the peripheries. It’s more probable he wanted to bring the Redemptorist’s international experience and global vision, honed by his earlier pastoral work with Hispanics in the inner cities of Detroit and Chicago, into the College of Cardinals.

It should be noted that Joe Tobin’s very first experience of crossing borders came before he even entered religious life. It was during his childhood when his family would spend summers farming land they owned in Ontario (Canada) only thirty-five miles from Detroit. When he was nineteen years old he and his father built a home on that farm and the family, burgeoning with thirteen children, left the United States to resettle in the small Canadian town of Stony Point. Tobin’s mother still lives in that same home.

But how much longer will the cardinal-designate be living in Indianapolis?

At an archdiocesan press conference the day the pope announced the new cardinals, Tobin made some cryptic remarks that suggest Francis (or one of his aides) may already have plans to eventually move him to another post.

“Nobody’s told me any differently. And I don’t suppose Archbishop Cupich is getting moved,” he continued.

Then, struggling to get out the words, he said:

“So, I’m gonna… to mention… if I get a phone call, well… Pope Francis doesn’t want airport bishops; he wants bishops to stay put.”

He went on in the same manner.

“So if I have anything to say about it…”—he started again, only to pause once more and take up a new thought— “I also know that I have a vow of obedience to Pope Francis and his successors. And if I’m told to do something I will do it with all of my possibility.”

Is Cardinal-designate Tobin already destined for another post down the road —perhaps a key position in the Vatican or a major archdiocese in the United States?

That could happen when a current archbishop reaches retirement, as has already happened in Washington, DC and will happen three years from now in Philadelphia. Or he could take over when another archbishop— perhaps in a place like Los Angeles or New York— is transferred somewhere else.

Whatever the future holds, Joe Tobin—at least for now— has firm plans to stay put in Indy.

The day before Pope Francis announced the consistory, the heads of Europe’s thirty-three national episcopal conferences (and six other delegates) were gathered in the Principality of Monaco to elect a new president of the Council of European Bishops’ Conferences (CCEE).

They settled on Cardinal Angelo Bagnasco of Italy, a choice that can only be seen as a direct challenge to Pope Francis.

Bagnasco was the conservative churchman Benedict XVI made Archbishop of Genoa in 2006 and then named president of the Italian Episcopal Conference (CEI) a year later. In 2012 the former pope reappointed Bagnasco to another five-year term as head of the CEI.

But soon after Pope Francis became Bishop of Rome in 2013, he appointed a new secretary general to the Italian conference and made that man, Bishop Nunzio Galantino, the CEI’s de facto leader.

The pope has said Cardinal Bagnasco will remain in his Italian post until the bishops are asked to elect a new president in March 2018.

But Bagnasco’s newly elected position as head of the CCEE is a five-year term that runs through the autumn of 2021. And here’s the rub: only presidents of national conferences are eligible to be the Eurobishops’ president.

Cardinal Bagnasco not only loses that national role in Spring 2018, he also turns seventy-five at the beginning of that same year. So he will have to step down from his European position no later than the autumn of 2018 after having served only two years of his five-year term.

Bagnasco and Francis have had a cool relationship and the Italian’s election as CCEE president is evidence that a majority of those who head national bishops’ conferences in Europe’s are still not fully on board with the pope and the direction in which he’s trying to move the church.

Further evidence of this is the election of Archbishop Stanislaw Gadecki of Poznan (Poland) as one of two CCEE vice-presidents. He was a vocal critic of Francis’s attempts during the two Synod assemblies on the family to find pastoral solutions to situations (such as the issue of divorced and remarried Catholics) that have long seem deadlocked.

Cardinal Vincent Nichols of Westminster, considered a careful and thoughtful moderate, was elected the other CCEE vice-president. It is believed that he was actually hoping to become the organization’s president.

And that would explain why he missed major celebrations in Rome last week—including an ecumenical prayer service with Pope Francis and the Archbishop of Canterbury—to mark the fiftieth anniversary of the establishment of the Anglican Centre in the Eternal City. That’s the office of the Anglican leader’s personal representative to the Holy See.

Cardinal Nichols was absent so he could attend the CCEE general assembly. But that raised eyebrows because the Archbishop of Westminster has always been considered the interlocutor with Anglican Communion’s chief spiritual leader. Evidently, he believed his presence at the European bishops’ meeting was more urgent.

Perhaps things will shift sufficiently within the CCEE membership in the next two years and the body will be more congenial to the pope and those who are more clearly his allies.

Then, when Cardinal Bagnasco steps down, the English cardinal may stand a better chance to become the Eurobishops’ president.