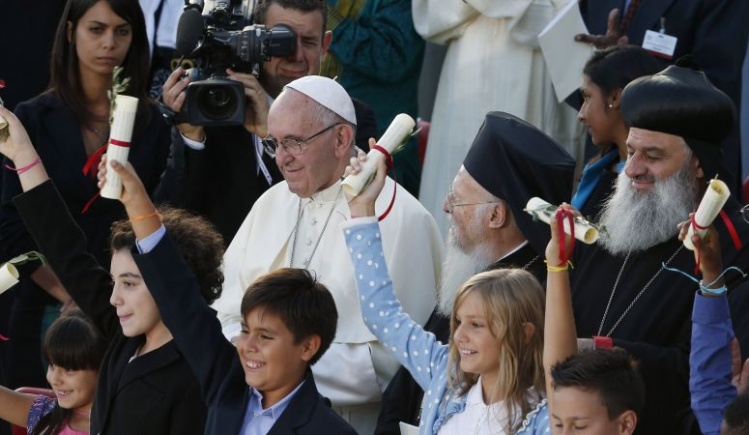 The “Spirit of Assisi”—a phrase that many people in the last pontificate ridiculed as an unthinking, trendy-lefty capitulation to religious syncretism—is fully back in vogue within the Catholic Church.

We can give much credit to Pope Francis for that, especially after this week’s gathering in St. Francis’s hometown with hundreds of leaders of all faiths to pray for peace and to say no to war, violence, and terrorism in the name of religion.

The pope’s unflinching support of this “Spirit of Assisi” project, which has sought to keep alive the historical 1986 effort by John Paul II to unite all the world’s religions in the quest for peace, has been indispensible.

But the real credit for continuing the original initiative goes to the Sant’Egidio Community. It was this Rome-based lay movement that courageously began calling together religious leaders each year, always in some new place around the world, to repeat the 1986 event.

And they did it in spite of the cries of “scandal” that traditionalist Catholics (including some doctrinal officials at the Vatican) raised when the late Polish pope dared to pray alongside non-Christians thirty years ago for world peace.

In fairness, Benedict XVI also went to Assisi five years ago to commemorate the twenty-fifth anniversary of that original Prayer Meeting for Peace. But he used the event more as a moment to defend the place of religion in society than as an opportunity to put aside religious differences (which seemed too dangerous to him) and raise a united supplication to God, a supplication for peace.

This week Pope Francis and some five hundred others signed a new Appeal for Peace that, “with firm resolve,” they “reiterate that violence and terrorism are opposed to an authentic religious spirit.”

May a new season finally begin, in which the globalized world can become a family of peoples. May we carry out our responsibility of building an authentic peace, attentive to the real needs of individuals and peoples, capable of preventing conflicts through a cooperation that triumphs over hate and overcomes barriers through encounter and dialogue.

They conclude with these words:

Nothing is lost when we effectively enter into dialogue. Nothing is impossible if we turn to God in prayer. Everyone can be an artisan of peace. Through this gathering in Assisi, we resolutely renew our commitment to be such artisans, by the help of God, together will all men and women of good will.

The world needs the “Spirit of Assisi”—whether it borders on religious syncretism or not—now more than ever.

Pope Francis is, without a doubt, the most popular and probably most beloved religious leader on the planet right now—even among those who are not Catholics.

“The United Nations should make him its next Secretary General!”

So quipped a U.S. businessman friend who does consultancy work with some big firms here in Europe. And he was only half joking.

“There is no one on Earth who enjoys greater credibility and moral authority,” said my friend as we lunched at a Roman trattoria across town from the Vatican.

But if the first New World pope has won the hearts and gained the admiration of ordinary people, especially as “the pope of mercy,” he has only dismayed and angered many priests and bishops. They feel he’s unsparingly harsh with the Catholic clergy and dangerously lax when it comes to upholding Church doctrine.

More and more of the men with miters are grumbling under their breath, at least here in Italy. They have watched with dismay as Francis continues to replace retiring prelates with a new breed of “pastoral bishops” who have embraced his call to live simply and humbly “accompany” their people, rather than try to rule them.

The old guard in the Italian hierarchy—that is, those who earned their episcopal rank under the previous two popes—has been left by the wayside. Gently, but firmly, Pope Francis has effectively neutralized them. And there are a couple of examples that stand out.

During his three-and-a-half years as Bishop of Rome, Francis has twice denied the cardinalate to Archbishop Francesco Moraglia. He’s the man Benedict XVI made patriarch of the famed see of Venice in 2012. Instead, Francis has given red hats to bishops in other unlikely places in Italy like Ancona, Agrigento, and Perugia—not exactly known as ecclesiastical powerhouses.

In late 2013 he also appointed a social justice and anti-mafia bishop, Nunzio Galantino, secretary general and “de facto” head of the Italian Episcopal Conference (CEI). In doing so, he left the previous pope’s handpicked president of the CEI—the conservative and doctrinaire Cardinal Angelo Bagnasco of Genoa—a “lame duck” until his second five-year term ends in 2018.

In what observers here saw as a further snub to the cardinal, the pope did not attend Italy’s National Eucharistic Congress this past weekend, which was hosted by the Archdiocese of Genoa.

Francis has also kept Cardinal Angelo Scola, one of his main rivals at the last conclave, at a safe distance in the Archdiocese of Milan north of Rome. Scola, who was a key insider in the last pontificate, has had only one or two significant meetings with Francis. And—at least up to now—he’s been unsuccessful in getting the pope to visit the Church of Milan, one of the largest dioceses in Europe.

The Vatican has offered what everyone initially believed was a reasonable excuse. It said the pope would be making no special trips within Italy during the current Year of Mercy (which does not end until November 20).

Italians who are not exactly thrilled with this pontificate (yes, some do exist) have not believed a word of it. They have noted bitterly that while Francis could not find time to attend the Eucharistic Congress or visit the country’s largest diocese he, instead, has now made two visits to Assisi over the course of only seven weeks.

“You are so lucky to live in Rome.”

That’s what first-time visitors to our fair city often tell me. And for those who have only a few days to leisurely stroll through the cobblestone streets of the historic center, whether they are on vacation or even attending a conference, being a resident of the Eternal City must seem quite enviable.

But the reality of actually living and working here might not be as glamorous as many people think. I’m not sure how long, say, Americans—who are used to living in large detached homes with two-car garages and sprawling green lawns—would survive living in a tiny flat in a noisy apartment building. In fact, that is the reality for most people in Rome. And I’m afraid it doesn’t quite match the idyllic paradise starry-eyed tourists imagine it to be.

All that said, I’m not complaining—at least no more than any of the Romans, who are notorious for being lamentoni; that is, great lamenters.

But, unfortunately, there is much to lament these days. Even the Vatican’s official newspaper, L’Osservatore Romano, says so. A news item it printed several days ago (it was about thunderstorms in Italy!) managed to point out, in a matter-of-fact sort of way, that the weather only complicated things for Rome, which was already “in a state of abandonment.”

Around that same time that article appeared, the above-mentioned secretary general of the Italian Episcopal Conference, Bishop Galantino, was seen to criticize Rome’s new mayor, Virginia Raggi, for doing nothing to fix the city’s ills. He told Italy’s most read daily, Corriere della Sera, that the Raggi administration had to put an end to political infighting and start governing.

Many residents of Rome wonder if that is even possible.

But then they complain some more, shrug their shoulders and repeat, to anyone who will listen, the famous lines attributed (probably falsely) to the late Fascist ruler, Benito Mussolini. When asked if it were difficult to govern such an individualistic and anarchic people as the Italians, he supposedly quipped: “It’s not difficult. It’s useless!”

Well, Ms. Raggi has not reached that conclusion and thrown in the towel just yet. The attractive thirty-eight-year-old is a lawyer with hardly any experience in city government except for a couple years on city council. She was elected three months ago as a candidate of the Five Stars Movement, an anti-establishment party that is now becoming the butt of more jokes than its stand-up comedian founder, Beppe Grillo, could ever produce.

So far Mayor Raggi has been unable to even initiate the reforms she promised in the run-up to her election, as she’s seen at least five of her top officials resign in the past several weeks.

Garbage, which is collected haphazardly and sporadically, continues to pile up. There is no sign of a single effort to address the horrible traffic congestion. Public transportation is as unreliable and unpredictable as ever. And the city’s corroding infrastructure is not being addressed.

Meanwhile, the Vatican’s Deputy Secretary of State (il Sostituto), Archbishop Angelo Becciu, tried to tone down the polemics caused by the L’Osservatore Romano article. “Here in Rome we’ve been saying for years that the city’s been abandoned,” he said.

The archbishop then emphasized that the Vatican was not against Rome’s first citizen and said: “It’s only right to give the new mayor, Virginia Raggi, time to work and address the city’s chronic problems, which are not the fault of the current administration but are certainly in need of a solution as soon as possible.”