Does Francis Want the CDW to Reform the Reform?
By Robert Mickens
Bishops
Letter from Rome
Liturgy
Vatican II 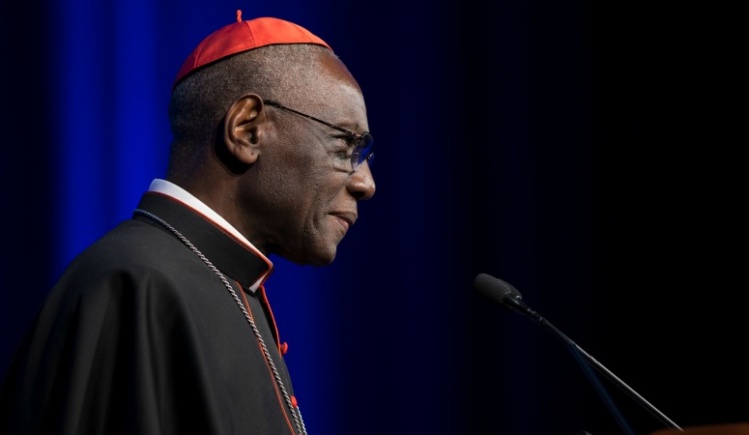 Cardinal Robert Sarah, prefect of the Congregation for Divine Worship and Discipline of the Sacraments (CDW), has announced that he’s setting up a commission aimed at overhauling the liturgical reforms that followed from the Second Vatican Council.

And in an effort to give the project added momentum he’s reiterated an earlier call to all priests around the world to start celebrating Mass versus orientem (towards the East)—that is, priest with “his back to the people,” as was the norm before Vatican II.

“I can say that when I was received in audience by the Holy Father last April, Pope Francis asked me to study the question of a reform of a reform [of the liturgy] and of how to enrich the two forms of the Roman rite,” said the cardinal on Tuesday at a conference in London.

“This will be a delicate work and I ask for your patience and prayers. But if we are to implement Sacrosanctum Concilium [Vatican II’s Constitution on the Sacred Liturgy] more faithfully, if we are to achieve what the Council desired, this is a serious question which must be carefully studied and acted on with the necessary clarity and prudence,” he told the conference’s mostly neo-Tridentinist participants.

He then made “an appeal to all priests” to “return as soon as possible to a common orientation, of priests and the faithful turned together in the same direction…when we are addressing God.” He said it was “permitted by current liturgical legislation” and was “perfectly legitimate in the modern rite.” He urged the priests “to implement this practice wherever possible” and suggested that the First Sunday of Advent (November 27) “may be a very good time to do this.”

He quoted the Hebrew Scriptures completely out of context to drive home his point.

“Dear Fathers,” he said, “we should listen again to the lament of God proclaimed by the prophet Jeremiah: ‘they have turned their back to me’ (2:27). Let us turn again towards the Lord!”

This is just the latest effort to keep fresh the divisions in the Church that Benedict XVI inadvertently fomented in 2007 when he issued Summorum Pontificum.

That document made it possible for the near-unrestricted celebration of the pre-Vatican II liturgy throughout the world. And in doing so it empowered a tiny minority of Catholics, many of them reactionaries and Vatican II skeptics.

These “retrodox” Catholics—some notoriously sympathetic to the Lefebvrist schismatics (Society of Saint Pius X)—gained so much prominence in the Church that they became the tail wagging the dog.

Sadly, Cardinal Sarah is an enabler of this group.

Did Pope Francis really “ask” Cardinal Sarah to set up a commission on reforming the Vatican II liturgical form? Or was it, in fact, the cardinal who initiated this development by asking the pope’s permission to form such a study group?

But as the saying goes, there is a grain of truth in every joke. And thanks to a quip the pope made on his return from Armenia last month, we know something of what he thinks about setting up commissions; according to his aside, they are often used as a way to kill an idea or proposal.

Is that what Francis is doing by allowing a CDW commission to start looking at how it can make the current Mass more like its unreformed, Tridentine version? Because, make no mistake, that is the objective of Cardinal Sarah and his cohort.

Or is the pope merely allowing the rigid ultra-conservatives (“those who say no to everything”) to “do their work” while he—without looking over his shoulder—gets on with doing his own, as he suggested in a recent interview?

One thing is certain though, if this is more than just “busy work” to keep the CDW prefect occupied until his seventy-fifth birthday in June 2020—and if it really does lead to some sort of “reform of the reform”—then the fault will rest with no one but Francis.

After all, the Jesuit pope appointed the Guinean cardinal as head of the Church’s worship office in November 2014 after an unprecedented three-month vacancy. Francis had sent the previous occupant, Cardinal Antonio Cañazaris, back to a head a diocese in his native Spain.

There is evidence that he wanted to replace the man known as “Little Ratzinger” with Archbishop Piero Marini, an unflinching supporter of the post-Vatican II liturgical reforms and former papal master of ceremonies.

But people in the Ratzinger camp ominously warned Francis not to do it, some alleging that it was even the former pope himself who intervened to block the Marini appointment less it unleash a “war” in the Church.

“I reject conflict,” Pope Francis said in the recent interview concerning the opposition he faces from ultraconservative bishops and Vatican officials. He also added that he does not like to fire people (“chop heads off”), but prefers to wait until they reach the retirement age and then remove them.

So is there hope for Vatican II Catholics that the pope will firmly resist any attempts to roll back the clock on the reforms that were begun by the Council, either in liturgy or other areas of the Church?

Because there are those in the Roman Curia, like Cardinal Sarah, who might not “say no to everything” the pope is doing to renew and reform the Church, but are clearly trying to move it in another direction.

What’s the pope to do?

According to well-placed sources at the Vatican, Pope Francis had planned to roll out a number of major personnel changes in mid-May, including the naming of a new prefect for the Congregation for Saints.

But it has been nearly two months and he has made no big appointments in the Roman Curia. One reason, it’s said, is that the pope has run into a similar pushback to the one he faced over the transition of leadership at Divine Worship.

The thinking now is that the “big changes” will come sometime in September, after the traditional summer hiatus.

And just as importantly they will come once World Youth Day (WYD)—July 25-31 in Krakow—is out of the way. Because that is when the pope is expected to make Cardinal Stanisław Ryłko, a curia veteran of thirty years and outgoing president of the soon-to-be defunct Pontifical Council for the Laity, the new Archbishop of Krakow.

Francis had assured the current archbishop, Cardinal Stanisław Dziwisz, that he would not be replaced until after hosting the international Catholic youth gathering and the papal visit.

So it will be one Stan replacing another—the seventy-one-year-old Ryłko taking over from the seventy-seven-year-old Dziwisz, both spiritual sons of Pope St. John Paul II, the man who ordained them to the diaconate, presbyterate, and episcopate.

The Krakow appointment is expected to set bigger wheels in motion at the Vatican and, if you permit a bit of midsummer night’s dreaming (albeit a bit late), this is how it could shake out.

As all but confirmed, the pope will replace Cardinal Angelo Amato SDB, seventy-eight, as head of the saint-making department with Archbishop Angelo Becciu, sixty-eight, currently deputy Secretary of State (the Sostituto). And Archbishop Gabriele Caccia, the fifty-eight-year-old nuncio to Lebanon, will be called back to Rome as the new Sostituto.

Cardinal Ryłko’s old office is being merged with the pontifical councils for the family and health care. It is believed that Francis wants to bring in a bishop from Latin America to head this new “dicastery” (which, in spite of opposition, he wants to be a congregation rather than a pontifical council).

The man rumored for the job is Cardinal Oscar Rodríguez Maradiaga SDB, one of the pope’s closest allies and a member of his kitchen cabinet (Council of Cardinals or C9). Although he is already seventy-three, he is energetic and charismatic. He could be of great moral and tactical support to the pope by being based in Rome.

There is a major post in Germany that needs to be filled and the man who might be the perfect candidate for the job currently works at the Vatican.

The ancient and historically important Diocese of Mainz needs a new bishop since the retirement several weeks ago for eighty-year-old Cardinal Karl Lehmann. He may not be the local priests’ and people’s preferred choice, but Cardinal Gerhard Müller fits the bill.

You want credentials? The sixty-eight-year-old, who is currently head of the Congregation for the Doctrine of the Faith and often at odds with Pope Francis doctrinally, is a priest from Mainz and did his doctoral work under Cardinal Lehmann.

Going back to head his home diocese could hardly be seen as a punishment, at least not to him. And it would be a generous offering to the universal Church if the folks and clergy of Mainz were to welcome him with open arms, even if some might see it as a penance.

This would allow the pope to call Cardinal Christoph Schönborn OP from Vienna to take over the CDF. The seventy-one-year-old Dominican is known as a “student” of Joseph Ratzinger, but he has shown creativity and flexibility in supporting the more open theological openings Francis has sought to bring about. In short, he has been a unifier and a healer.

Finally, what is to be done with Cardinal George Pell? The head of the Secretariat for the Economy is part of a compact group of senior Vatican prelates who are, at best, lukewarm to the reforming spirit the pope is trying to implement.

He, too, is now seventy-five and could be retired. But, unprecedentedly, he announced that Francis had told him he would be staying in his current post for the full five-year term to which he was initially appointed in February 2014.

That raised eyebrows, especially because the pope has never confirmed that—at least not publicly. There is still a chance that Cardinal Pell will be replaced before 2019.