Deaconesses in the Church? It's Just a Study
By Robert Mickens
Letter from Rome
Pope Francis
Religious Life 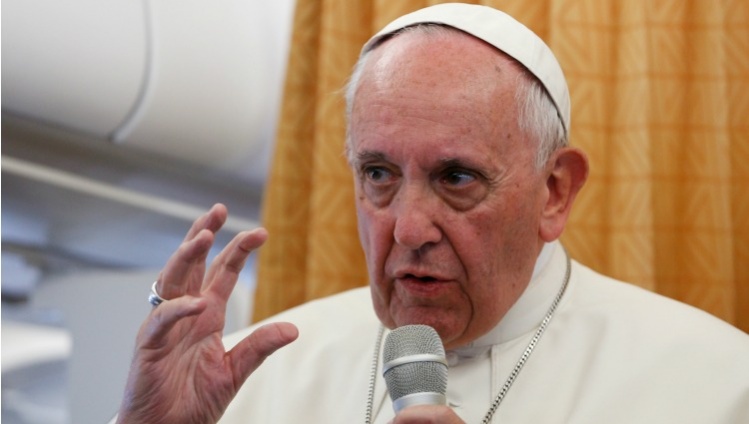 In just a little over the three years since he’s been in office Pope Francis has made twenty-four trips outside of Rome—fourteen journeys abroad and another ten throughout Italy.

He most recently went to Armenia, a tiny country on the outer edge of Europe that—in the year 301—became the first nation to officially adopt Christianity. A hundred and fifty years later the Armenians broke off from the rest of the still-(mostly) undivided Church when they rejected decrees from the Council of Chalcedon (451).

The vast majority of the country’s 2.9 million people today are members of the Armenian Apostolic Church, one of a handful of “non-Chalcedonian” Orthodox communities. Less than 10 percent of the population is Catholic and in communion with Rome.

The underlying reason that prompted Francis to travel 1,800 miles (equivalent of flying from New York City to Monterrey, Mexico) for a visit that consisted of little more than forty-eight hours on the ground seems to be the deep friendships he developed with Armenian immigrants in his native Argentina.

The seventy or so journalists who travelled with him did their best to make the visit newsworthy. The pope helped them by saying, once again, that the Ottoman Turks’ massacre of more than a million Armenians in 1915 was “genocide.” As expected, that drew a strong reaction from Ankara, which created a few headlines.

The Catholic media also focused on the ecumenical dimension of the papal visit. Some writers suggested (or better, exaggerated) that it might soon lead to a reunion between the Armenian Apostolic Church and the Church of Rome. Some opined that this, then, could set off a domino effect, leading to full communion between Catholic-Orthodox worlds. Hardly. But it is a nice thought.

No, the real news of the papal trip was the in-flight press conference Pope Francis held with reporters on his return from Armenia. It drew far more attention than anything he said or did during his brief visit to the world first’s Christian nation, including his use of the word “genocide.”

Except for the high-in-the-sky presser, this visit more than any of his previous thirteen international trips remained basically unknown for most people around the world.

Pope Francis’s free-wheeling press conference aboard the Alitalia A321 last Sunday evening was every penny worth the price of admission, which was a mere €2,300 (US $2,540) for each of the journalists.

It is refreshing that Papa Bergoglio, who seemed to have an aversion to us media types before he was elected Bishop of Rome, has become so colloquial and friendly with reporters and pundits. And by doing so he has helped to further de-mythologize the papacy, especially in the way he speaks so freely and honestly, unafraid to show the pope, after all, is not a semi-divine but just another bishop.

Francis, of course, is an Argentine. And often his Italian is clumsy and grammatically incorrect. And on occasion (more occasions, actually, than some in the Vatican would like) he says things that are politically incorrect or even gets his facts wrong, or at least confused.

For example, he has repeated several times in the last few months that Austrian Cardinal Christoph Schönborn, OP, was once secretary of the Congregation for the Doctrine of the Faith (CDF). That’s not true. Actually, the current Archbishop of Vienna was secretary of a commission at the CDF that drafted the Catechism of the Catholic Church (1987-1992).

Nonetheless, the pope’s casual way of conversing—sometimes because of the gaffes and a generous dose of humor—makes him seem more accessible, more real and more human.

It also gives those who are attentive an insight to what he really thinks about certain issues. And sometimes that can be very unsettling, if not downright off-putting.

Among the several questions put to him during the fifty-five minute in-flight press conference on the return from Armenia, Francis “was asked about his agreeing to a request by the women's International Union of Superiors General (UISG) to set up a commission to study the historic role of female deacons with a view toward considering the possibility of instituting such a ministry today”.

The entire manner in which he handled that question was not pretty.

As the reporter was still speaking he became visibly irritated. Then his immediate response was to make a wisecrack, noting that a former Argentine president once said, “If you have an issue you don’t want to resolve, form a commission.”

Then he expressed “surprise” that his promise to form such a commission had caused such a sensation, saying that he was “even a bit angry with the media” for running headlines such as, “The church opens the doors to deaconesses.”

“Really?” he asked. “This is not telling people the truth.”

Pope Francis said—and these are his exact words on the plane—that the women superiors basically told him: “We’ve heard that in the first centuries there were deaconesses. Would it be possible to study this; to form a commission?”

Then he said: “They asked nothing more than this.” In fact, he said such a study would be “pretty easy” since the International Theological Commission already did groundwork on this a few decades ago.

First of all, through his answer the pope depicts the heads of the women’s religious orders as naïve and uneducated. “We’ve heard?” No, the women have not “heard” about the female diaconate; they have been among the leading scholars researching the issue.

Secondly, does Francis really believe that the women want nothing more than an historical study on deaconesses in the early church? Or is this just a message that is meant to ease the fears of those in the all-male Catholic clergy and hierarchy who want to protect the patriarchal and misogynist elements so embedded in the Church?

It’s hard to say. But further along in his answer to the question, the pope repeated once more his belief that the “thoughts” and “ideas” and “points of view” of women were essential to the church.

“Women think differently than we men do,” he said, “and we cannot make good, sound decisions without listening to the women.”

But he seemed to rule out introducing any new structure into the church that would concretely incorporate women’s voices, though he said he had formed a commission of women theologians some eighteen months ago with the help of the Pontifical Council for the Laity. But, as that office is currently in limbo and awaiting the reform of the Roman Curia, the fledgling commission of women theologians remains in limbo too.

Pope Francis stressed that the ideas of women were more important than their “functionality,” which apparently means holding leadership or decision-making positions.

Once again, it must be said with much regret, the pope is a fuddy-duddy old cleric when it comes to the role of women in the Church.

The pope cannot be omnia omnibus (that is, “all things to all people”) and so, despite his disappointing inaction on promoting women in the Church, Francis has been far and way a great and inspiring Bishop of Rome.

As we’ve said before, he has begun changing the mentality of many inside the Catholic Church and has won the admiration of those who are not Catholics. He has also begun to prepare the foundations for more synodal form of Church governance and greater episcopal collegiality.

But it has been a bumpy road. And there has been lots of uneven pavement along the way.

Nowhere is that clearer than in the appointment of new bishops. At least for reform-minded and so-called Vatican II Catholics, the pope and his aides have selected some pastoral and servant-leader bishops for a number of dioceses. But they have also made some episcopal appointments that are baffling or that at least prove that the self-perpetuating “old boys’ network” is still very much alive.

The recent selection of two auxiliary bishops for the Archdiocese of Sydney, Australia illustrates this latter point. It also shows that Cardinal George Pell is still making the calls for the archdiocese he headed from 2001-2014.

The Vatican announced on June 24 that Francis had appointed Msgr. Anthony Randazzo and Fr. Richard Umbers to assist Archbishop Anthony Fisher, OP, in leading the Catholics of Australia’s largest city.

But neither those Catholics, nor their priests, had anything to say about the choice of the two new auxiliaries. And, by all accounts, most of them are not happy that these “outsiders” (that is, not members of the Sydney presbyterate) were foisted on them.

Msgr. Randazzo was actually born in Sydney, but he grew up near Brisbane, a twelve-hour drive up the coast. He’s been a priest of the Archdiocese of Brisbane since 1991.

Fr. Umbers, on the other hand, was born and grew up in another country—New Zealand. But he went to university in Sydney in the early 1990s and has been living fulltime in the city since 2002 as a priest-member of Opus Dei.

Both of these men are going to be around for a long, long time. Msgr. Randazzo is only forty-nine years old. And Fr. Umbers, at forty-five, is even younger. Archbishop Fisher, though he is still struggling to overcome a major health setback, is not exactly an old man. He’s only fifty-six, which gives him another nineteen years until the canonical retirement age.

Cardinal Pell’s fingerprints are all over these appointments, just as they were all over the appointment of his successor. Why Francis allows this, to a cardinal who has been opposed or impassive to just about all the pope does except in the financial reform sector, is mindboggling.

But even more unacceptable is that the seventy-five-year-old Australian is still head of the Vox Clara Committee (which is supposed to consist of residential bishops, not those in the Roman Curia). And, of course, how does one explain that he is also a member of the pope’s privy council of cardinal advisors (C9)?

The only consolation is that maxim the pope likes to repeat, “Time is greater than space.”