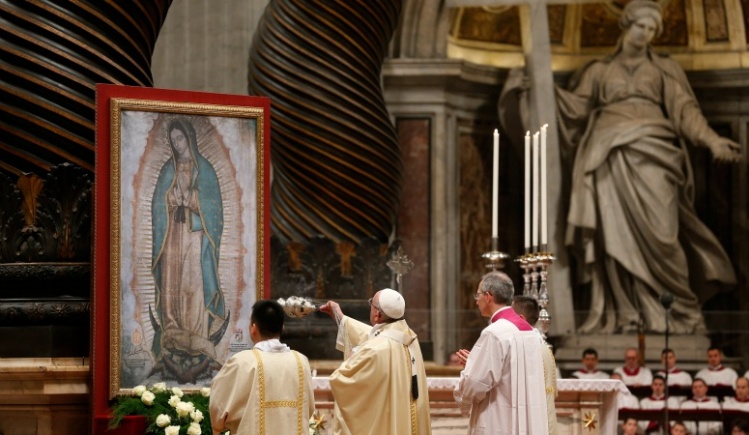 It has taken almost three years since his election to the papacy. But, finally, Pope Francis is going to Mexico. The Vatican officially confirmed his February 12-18 visit to the world’s second-largest Catholic country (that is, behind Brazil) last Saturday on the Feast of Our Lady of Guadalupe. It was the same day the pope presided at evening Mass in St. Peter’s Basilica to honor the Patroness of the Americas on her memorial and to mark the Third Sunday of Advent.

This was the second consecutive year that Francis has celebrated the December 12 feast, mainly in Spanish, with residents in Rome originally from North, South, and Central America, as well as the Caribbean. But this year’s Guadalupe Mass was a far cry from last year’s liturgy, which featured the Misa Criolla and included many popular Latino church hymns and symbols. Instead, even though the prayers were in Spanish, this time all the sung Mass parts were in Latin Gregorian chant. And rather than being a festive and lively celebration distinctive of Latin American Catholicism, it was so heavy and somber that it could have been a funeral.

The papal visit to Mexico is sure to put that right. “Padre Francisco” will follow a complicated and packed itinerary that will have him anchored in Mexico City while making day trips via airplane and helicopter to four widely different parts of the nation, which is the most populous Spanish-speaking country on earth.

In addition to events in the Mexican capital, where he’ll be staying at the apostolic nuncio’s residence, Francis will also go to the shrine of the Our Lady of Guadalupe; among the indigenous peoples of Chiapas and San Cristóbal de las Casas near the border with Guatemala to the south; the city of Morelia in the central state of Michoacán; and he will then complete the visit by going north to the notoriously crime-ridden Ciudad Juárez on the U.S. border across from El Paso, Texas.

Many Mexican Catholics have been bewildered and hurt by the fact that it has taken history’s first Latin American pope so long to finally visit their country. Although Paul VI never visited Mexico, John Paul II made sure he went there on the very first of his 104 foreign journeys. It was in January 1979, just three months after becoming pope. He would eventually go back four more times, earning a place as “Mexico’s pope."

Benedict XVI also visited the country. That was back in March 2012 before heading to Cuba. It was his second-to-last foreign trip before resigning the papacy a year later.

Many in the Vatican want Pope Francis dead.

That wild claim was recently made by Francesca Chaouqui, the “Chatty Cathy” who’s looking at the possibility of several years in the hoosegow for her alleged role in passing confidential documents to journalists in the so-called VatiLeaks II scandal.

“I’m in trouble because of a squalid power struggle between cardinals,” said Miss Chaouqui, a former member of a Vatican financial advisory board the pope set up. She added that among those red-hatted wonders are men “who hope Papa Bergoglio dies either one day or the next.”

She said, ominously, that one such cardinal told her that popes come and go, but the curia remains. So there you have it.

But most people seem to be taking Chaouqui’s remarks with a pinch of salt, considering many of the other outlandish and caustic comments for which she became famous even before getting embroiled in the Vatican leaks scandal.

Nonetheless, that does not change the reality that there are cardinals, bishops, and other important people with vested interests in how the Church and the Vatican are run who would prefer someone other than Francis as pope.

For example, it was widely reported a couple of weeks ago that Archbishop Luigi Negri of Ferrara in Northern Italy, had been overheard in a phone conversation on a passenger train basically stating his displeasure with the Jesuit pope—and in rather unkind terms.

The prelate, who is considered one of Italy’s most conservative bishops, has denied that he ever spoke ill of the reigning pontiff and even offered to personally renew his allegiance to Francis. Another pinch of salt?

One thing is certain. Pope Francis, who turns 79 on Thursday, faces opposition from many in the hierarchy. That does not mean any among them want to slip him a “Luciani Latte,” as a friend blasphemously calls poisoned coffee.

The German current affairs magazine, Focus, last month published an open letter to the pope written by someone (from Germany) who allegedly is a former high-ranking official in the Roman Curia. The letter is excoriating and merciless. Among other things it accuses Francis of being anti-intellectual, authoritarian, populist, anti-clerical, and practicing bogus simplicity.

The author—and who knows if he is really a former or current German official in the Vatican?—says he wrote the missive because he was upset by the pre-Christmas address the pope gave last year to the Roman Curia. It was the one in which he listed all the potential spiritual and moral ills that can afflict those who work in this central church bureaucracy.

The ex-official says Francis’s talk was “harsh” and “unjust.”

Stay tuned. The pope is giving another one of those pre-Christmas talks to the curia next Monday.

It is truly a sign of globalization that Christmas trees are now a common fixture in Rome and most other parts of Italy during the holiday season. This was never the case just a couple of decades ago, except perhaps for some northern towns and cities near the Austrian and Slovenian borders.

Before Pope John Paul II put a towering Tannenbaum in St. Peter’s Square for the first time in 1982, it was rare to see a Christmas tree anywhere in a public place in the Eternal City.

When the municipality of Rome eventually adopted the custom sometime in the 1990s the first tree it put up was in the middle of the traffic-swirling Piazza Venezia. And it was not a pretty site. If memory serves, the lights were haphazardly and unevenly hanging from a rather scrawny specimen of an evergreen. The kindest thing one could say is that it looked like an unmade bed.

Fast forward to 2015 and a casual visitor would get the idea that Christmas trees had always been a part of Rome’s cityscape. Large, full spruces—illuminated with carefully assembled lights of various colors—proudly stand in probably a dozen squares around the historic city.

The tree in Piazza Venezia is now an elegant site to behold, as is its rival several blocks away in front of the Colosseum. Fortunately, the relatively recent ascent of the Christmas tree here has not replaced the much older, quintessential Italian holiday symbol of the nativity scene. It’s known as the presepe or presepio. And infinite varieties of it can be found everywhere.

The artisans in Naples, to the south, have been the country’s master craftsmen and innovators of elaborate nativity scenes for centuries. Long ago they decided to create settings that expanded far beyond the traditional scene of the Holy Family, shepherds, the wise men, and a few barn animals.

The Neapolitans added miniature villages and towns, an array of new figurines of ordinary folk and even cascades with flowing water. There is an entire street in the old part of Naples where shop after shop of artisans produce and sell everything one can imagine for assembling the simplest to the most complex “manger” scenes.

In our own day it has become fashionable and fun to include figurines of contemporary people such as celebrities, politicians, professional athletes and—naturally—even the pope.

The craftsmen already had the crèche-sized Pope Francis on the market not long after his election in March 2013. And his figurine has been a big seller. One usually sees it hovering next to Mary and Joseph over the baby Jesus.

But the Church of Santa Maria delle Grazie (Our Lady of Graces) in the neighborhood near the entrance to the Vatican Museums has Francis placed rather differently. With arms raised in what seem to be a hearty laugh, he’s seated outdoors with two other people around a dinner table.