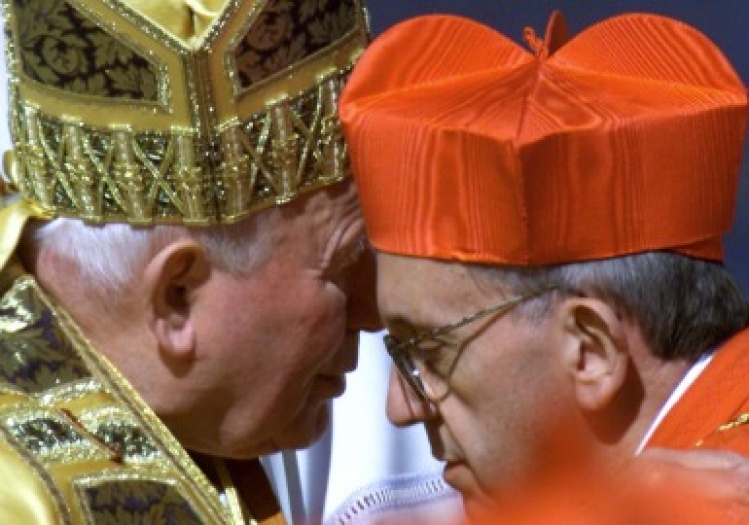 It is still very moving to watch the videos of the newly elected pope on the central balcony of the façade of St. Peter’s Basilica and to listen again to his very first words. “The most eminent cardinals have called forth a new Bishop of Rome… from a country far away.” Of course, the “new” Bishop of Rome that said those words was not Pope Francis, but John Paul II. It was October 16, 1978, and the church’s cardinals had just elected their confrere from Poland, Karol Wojtyla of Krakow, in what was the second conclave to be held in just seven weeks. The Polish pope, the first non-Italian to be elected in four-hundred-and-fifty years, took the same name as his immediate and short-lived predecessor. His native “country far away” was still a hostage of the Soviet Union and trapped behind the Iron Curtain. Many would later call him JP2, while still others would playfully invoke him as J2-P2, a spin-off from the Star Wars character R2-D2. His iconic status began to take shape the very evening of his election when he surprised many in the Vatican by breaking protocol. Ignoring protestations from the papal master of ceremonies, he became the first pope in history (or so it is believed) to actually speak during the initial post-conclave appearance on the central loggia. And during his nearly twenty-seven years on the Chair of Peter, he would go on to change many other longstanding customs and traditions, following a trail that John Paul I (Albino Luciani) had begun to blaze in his mere thirty-three days as pope. Tomorrow marks the tenth anniversary of the evening when the Vatican’s deputy Secretary of State, then-Archbishop Leonardo Sandri, announced to a packed St. Peter’s Square and the entire world that Papa Wojtyla had died. Normally, this would have been the day that Rome diocesan officials could officially open his cause for sainthood. And that’s only because John Paul II drastically reduced the required waiting period from the time of someone’s death – from fifty to ten years – before the process could even begin. But even this rule was thrown aside and only nine years after his death he was declared a saint.

Gianfranco Svidercoschi, an Italian journalist who covered the Second Vatican Council and was for a time the assistant editor of L’Osservatore Romano, believes there many parallels between Pope Francis and John Paul II. The seventy-eight-year-old native of the Marches (he’s also of Polish ancestry) recently published his latest book to mark the two-year anniversary of the Argentine pope’s election. It’s called Un Papa solo al comando, which could be translated as, “Only one pope in charge,” or “A pope all alone in charge.” Svidercoschi maintains that among “the many analogies and similarities between the two popes” there is the fact that both their elections “changed the image of the church and its history.” He cites the so-called “balcony speech,” which John Paul introduced when he was elected, as one of those likenesses. But, perhaps, he makes too much of it. The novelty of the words the just-elected Francis proclaimed on the balcony went far beyond merely referring to himself as “Bishop of Rome,” just as John Paul had done. That is, after all, a pope’s most important title and it is the position upon which all other titles or prerogatives depend. Very different from his Polish predecessor, Papa Bergoglio actually emphasized the local church he was elected to serve. “The diocesan community of Rome has its bishop. Thank you!” he said. “And now let us begin his journey – bishop and people,” he continued, adding that the church of Rome “presides in charity over all other churches.” But the most poignant moment of the brief speech was when he asked this “favor” of those gathered in St. Peter’s Square: “Before the bishop blesses the people, I ask that you pray that the Lord blesses me – the prayer of the people, asking a blessing for their bishop.” Then, just before deeply bowing his head, he said: “Let’s do this in silence, this prayer of yours over me.”

“Francis is a peasant!” I was taken aback a bit by those words, which an old acquaintance of mine proclaimed rather dogmatically the other evening as we conversed over a glass of wine. “I say this pope is a peasant,” he declared again. But then, with a mischievous smile, he quickly added, “But a pretty good one.” My conversation with the man – a Bavarian priest and scripture scholar – continued as we stood amidst racks of bottle in a cramped little vineria near the spot in downtown Rome where Julius Caesar is believed to have been murdered in 44 B.C. “Why is the pope going to a prison on Holy Thursday?” the priest then asked rhetorically. “This is unacceptable! The head of the whole Catholic world should be celebrating the Sacred Triduum in St. Peter’s Basilica, not dragging journalists and photographers to a prison to watch him wash the feet of Muslims!” he said more adamantly. “This is grandstanding!” At this point I was able to get in a word, agreeing that he had a point. But it’s not that Pope Francis should be celebrating Holy Week and Easter at the Vatican. To the contrary. Like any other bishop, he should be doing that in his cathedral, which is St. John Lateran. Officially called the Archbasilica of the Most Holy Savior and Sts. John the Baptist and the Evangelist at the Lateran, it claims to be “mater et caput” (mother and head) of all other churches in the city and the world. It is the seat of the Diocese of Rome, housing the “cathedra” of its bishop. And yet the bishop – like so many of his predecessors – rarely even visits his cathedral. There were hopes that Pope Francis might have changed that, especially given his words the night he was elected. Instead, he has eliminated the only papal liturgy during the Easter Triduum that was customarily celebrated at Rome’s cathedral – the Holy Thursday Mass of the Lord’s Supper. 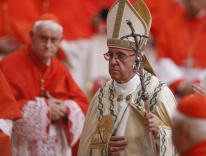