Where Is the Vatican 'Transparency' on Abuse?
By Robert Mickens
Pope Francis
Letter from Rome
Columnists
Sexual-abuse Crisis 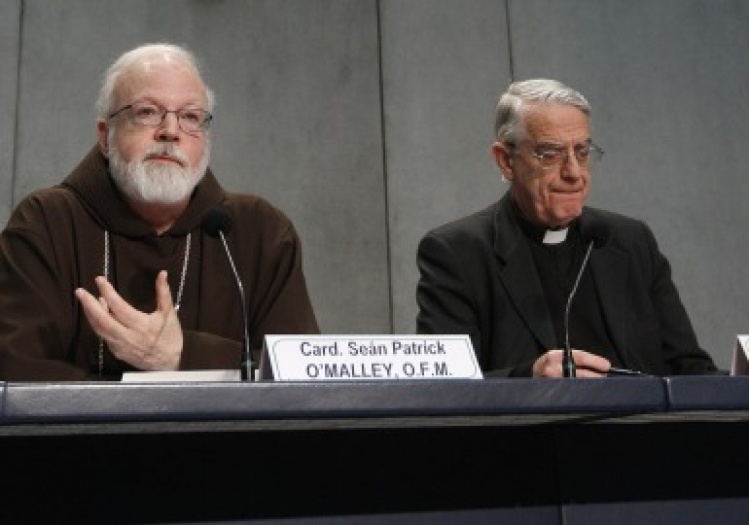 The Pontifical Commission for the Protection of Minors held its first full plenary session in Rome last week under the direction of Boston’s Cardinal Sean O’Malley. They told journalists at a briefing on Saturday they were formulating suggestions for how Pope Francis should make bishops accountable for implementing protection guidelines. As expected, certain survivors’ groups and other critics of the Vatican dismissed this as yet more empty words. That’s unfortunate. But it’s also understandable, especially given the Vatican’s lack of transparency when it comes to dealing with such bishops. The head of the Holy See Press Office, Fr. Federico Lombardi, SJ, offered a rare public display (at least for him) of how defensive church officials can be when pressed for more openness. Visibly irritated, he snapped back at an Italian TV journalist who attempted to ask why there was a delay in the trial of Jozef Wesolowski, the defrocked bishop and former papal nuncio to the Dominican Republic who has been charged with sexual abuse of young boys. “It has nothing to do [with this briefing],” the priest said curtly. When she pressed him an aide took the microphone from her and Fr. Lombardi said, “Enough! Let’s move on.” This, too, was unfortunate. The Holy See has publicly dealt with at least four bishops for either committing abuse or trying to cover it up. But there has been no transparency regarding their whereabouts or their status. In addition to Wesolowski, there is also Belgian Bishop Roger Vangheluwe, who “resigned” in 2010 after admitting to molesting his young nephews. Where is he now? Has he been laicized? The Vatican has not said. Then there is Scottish Cardinal Keith O’Brien, who also “resigned,” just before the conclave of 2013 after being accused of sexual harassment by a number of seminarians and priests. Where is he? The Vatican will not say. And, of course, there’s the case of Bishop Robert Finn of Kansas City, who was given a two-year suspended sentence after being criminally convicted for failing to report sexual abuse of minors. The Vatican supposedly carried out an investigation last September and two months later in a TV interview Cardinal O’Malley had this to say about the Finn case: “It’s a question the Holy See must address urgently.” Is it cynical to wonder what in the world transparency and urgency mean in the Vatican?

“For the bishop and the priest – especially the parish priest – the preaching of the homily is one of the principal ways in which he carries out his ministry of teaching… And insofar as this office has been entrusted to them, we can say the same thing about the ministry of deacons.” Thus said Archbishop Arthur Roche on Tuesday as he helped launch a new “homiletic directory” prepared by the Congregation for Divine Worship. Benedict XVI, who re-launched the directory project a decade ago, named Roche, the former Bishop of Leeds (England), the No. 2 official at the congregation in the summer of 2012. Some saw this as Bishop Arthur’s reward for being compliant and not protesting the controversial translation of the new English-language missal when he served as head of ICEL (International Commission for English in the Liturgy). Then-Bishop Roche apparently did not like the new Mass texts that Cardinal George Pell and his “Vox Clara” Committee had produced, but he kept his silence. “I think of the great homilies of St. Ambrose, St. Augustine, St. Leo the Great … eloquent examples of the teaching in a liturgical context of pastors who were dedicated to the flock entrusted to them,” the now-Archbishop Roche said on Tuesday. He could have easily added another name to that impressive list – Cardinal Vincent Nichols of Westminster. It seems he really liked a homily the cardinal gave at Christmas Midnight Mass in 2005 when he was still Archbishop of Birmingham. How much so? Well, he gave practically the same sermon two Christmases later at his own cathedral in Leeds. A reader sent me both texts and, with only the slightest modification, they are identical. “As a general rule, the homily should not be improvised,” the secretary of the Congregation for Divine Worship said at the launch of the homiletic directory. Indeed. Why improvise when you can simply borrow a really brilliant homily that someone else already preached?

As everyone knows, this is a busy time in the Vatican. One might be tempted to call these Red Letter Days or, better still, the Red Hats Week. That’s because all the church’s cardinals are flocking to Rome for two days of closed-door meetings (Thursday and Friday) in the run-up to the public consistory on Saturday when Pope Francis is to create fifteen more cardinal-electors under the age of eighty and another five who are beyond that age and will have no vote in a future conclave. Last year when the Pope gathered the entire College of Cardinals for pre-consistory meetings, he launched a bombshell. He had Cardinal Walter Kasper, the de facto theologian of his pontificate, give a provocative lecture on the challenges facing pastoral care of marriage and the family. Intense reactions followed. It was the beginning of a new period of discussion, discernment, and debate that the Jesuit pope has sought to create among the Church’s leaders. This time the elite college will be discussing reform of the Roman Curia in the pre-consistory sessions. Nine of their members – those who make up Council of Cardinals that Francis formed to help him govern the universal church and map out curial reform – have already been holding their eighth series of discussion with the pope since Monday. There are clear plans to reorganize the offices, reduce the number of cardinals at certain posts and to create a better system to coordinate the work of bureaus that are called to serve the needs of the Bishop of Rome and the universal church. Some of the men from the Vatican’s “old guard” have not been very cooperative with the proposed changes. Pope Francis is turning to the entire College of Cardinals as way to override their resistance.