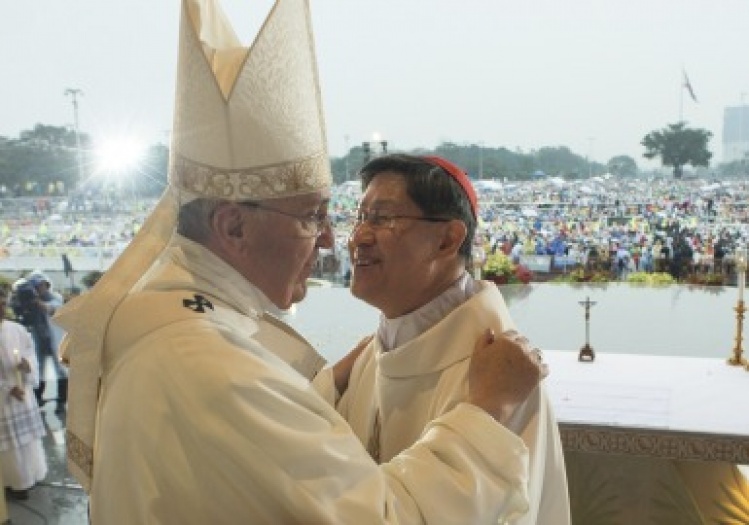 Churches of all denominations are currently in the midst of an eight-day Week of Prayer for Christian Unity. The octave was begun back in 1908 and since the end of Vatican II (1962-1965) the Pontifical Council for Promoting Christian Unity has teamed up with the Faith and Order Commission of the World Council of Churches to plan the annual observance. They’ve taken this year’s theme from the Gospel story of the Samaritan woman at the well: “Jesus said to her, ‘Give me to drink’ (John 4,7).” [Texts for daily meditations can be found here.] It’s said that the popes as far back as Pius X (1903-1914) were favorable to the week of prayer, but until the Second Vatican Council they held the policy that true ecumenism could only be based on the simple principle that other Christians had to convert to Catholicism. That view has changed more than a bit since Vatican II. Pope Francis is the latest and, perhaps, most vocal of the post-conciliar popes to support the notion that church unity does not mean uniformity, but can (must) include much of the diversity that exists among the various Christian communities. Though much attention is given to his efforts to reform Vatican finances and the Roman Curia, ecumenism is really at the heart of Francis’s reforms. Next Sunday he will continue the decades-old custom of his predecessors and bring the Week of Prayer for Christian Unity to a close with ecumenical Vespers at the Roman Basilica of St. Paul’s Outside the Walls. It was in a meeting room next to the basilica that Pope John XXIII, on the same day in 1959, surprised the world by announcing plans to have the now-legendary council. Would anyone be surprised if Pope Francis used this occasion to make his own important announcement?

There was a moment during the pope’s recent pastoral visit to East Asia that must have turned more than one person’s thoughts towards that unknown future date when it will be time to elect his successor. Standing side-by-side at one of the ceremonies in the Philippines were two of the top candidates – Manila’s archbishop, Cardinal Luis Tagle, and Francis’s Secretary of State, Cardinal Pietro Parolin. The youthful Filipino would be the first pope ever from East Asia. Although he will be only fifty-eight next June, he has already become recognized as a wise and beloved pastor in the three short years he’s headed the primary archdiocese of the region’s only predominantly Catholic nation. Cardinal “Chito,” as he’s known at home, has the advantage of speaking quasi-mother-tongue English. He also has an exuberant personality and is an inspiring speaker. Cardinal Parolin, who turned sixty during the papal visit, would be the first Italian pope since 1978. Considered one of the best and brightest from the Vatican’s meticulously prepared diplomatic corps, he’s known for taking a decisively pastoral approach in a highly specialized line of work usually associated more with its bureaucratic and political aspects. A native from the same Veneto region in the north that produced the last Italian to sit on the Throne of Peter, John Paul I, he’d likely carry forward the program of the current pontificate, but in a gentler and less tempestuous way. A third candidate was back in the Vatican during the papal trip. He’s Cardinal George Pell. Unsuccessful as the would-be “king maker” of Milan’s Angelo Scola at the last conclave, the seventy-three-year-old Australian and head of the Secretariat for the Economy could emerge as “king” this time, representing the traditionalists in the college that are biding their time and hoping that Francis’s pontificate will be a brief one.

Pope Francis would be the first to admit that English is not his strong suit, but he showed amazing determination to use the language during his whirlwind visit to Sri Lanka and the Philippines. The only problem was that, as the trip wore on, so did his frustration with his inability to do one of the things he does best – speak off the cuff and from the heart. He sure tried, though. Perhaps the most humorous occasion came during a Mass with Filipino clergy and religious. He began his homily by saying: “Do you love me?” The assembly roared back, “Yes!” With a look of surprise, the pope burst into laughter and said, “Thank you very much!” As the delighted crowd applauded and also began laughing, he said, “I was reading the words of Jesus!” But aside from a few other attempts to speak freely and from the heart in English, the Argentine pope eventually decided that speaking a foreign language was too much of a straitjacket. So he decided to speak extemporaneously in his native language, thrusting Mgr. Mark Miles, his English-speaking aide from the Vatican’s Secretariat of State, into the high-profile role of public translator. The forty-seven-year-old priest of Gibraltar was at the pope’s elbow every minute of the trip, providing translation help during more private conversations. But it was the first time I can remember that a pope used an aide in such a way to allow him to continuously speak so frequently off-the-cuff. Mgr. Miles entered the Vatican’s prestigious finishing school for diplomats in 2000 and then did postings abroad – Ecuador and Hungary – before returning to the State Secretariat in 2009. The world is likely to see and hear a lot more of him in the next several months – especially next autumn when the pope makes his visit to the United States.