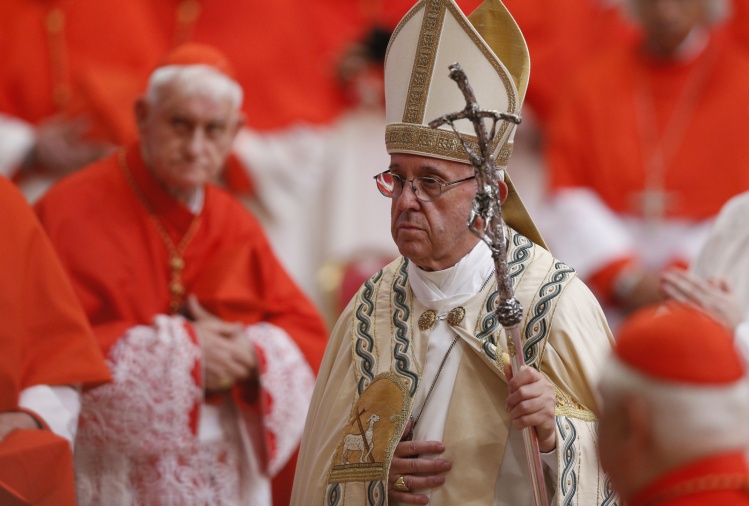 Pope Francis walks past cardinals as he leaves a consistory in St. Peter's Basilica at the Vatican June 28. (CNS/Paul Haring)

If you read the headlines of some publications, you would be convinced that Pope Francis’s project to renew and reform the Catholic Church has been dealt a staggeringly sharp blow and is now in deep crisis.

The journalists and commentators who are pushing this story line have what they believe is mounting evidence that the pontificate is on the ropes.

They point to the kerfuffle surrounding Francis’s controversial decision on June 30 not to renew Cardinal Gerhard Müller’s mandate as prefect of the Congregation for the Doctrine of the Faith (CDF).

They also cite the temporary “forced suspension” one day earlier of Cardinal George Pell’s brief as head of the Secretariat for the Economy, due to still-unspecified charges of sexual abuse that the cardinal will soon confront in an Australian court. And they note the abrupt and still-unexplained resignation some eight days before that of Libero Milone, the Vatican’s first-ever auditor general and close aid to Pell.

Then there’s the case of at least two priest-officials in the Roman Curia who were recently reported to be engaging in scandalous homosexual behavior, a perennial dark side of clerical life in the Eternal City.

One was denounced for “cruising” St. Peter’s Square in search of sex with young men. The culprit is said to be a member of an important religious order and an archbishop in a major Vatican office. There are only six such people that fit the description: two are Jesuits, another two are Dominicans, one is a Legionary of Christ, and one is a Franciscan.

The other cleric reportedly caught in a gay sex scandal has been identified as a monsignor who serves as personal secretary to one of Pope Francis’s most important curia allies. The incident involving this priest supposedly included the use of cocaine. Some “journalists” have embellished their accounts of this sordid tale with sensationalized and factually erroneous details, including the assertion that the said cardinal knew (or should have known) what naughty business his secretary was up to.

Vatican employees and Church commentators who are not especially keen on Papa Francesco have seized upon this series of “bad news” and have tried to throw it like mud at the pope. But, most likely, it won’t stick.

First of all, the religious-archbishop accused of cruising for gay sex and the cardinal who allegedly turned a blind eye to his priest-secretary’s drug-fuelled sexcapades were both appointed by Benedict XVI. So you can’t blame Bergoglio for showing bad judgment in personnel matters, at least not these appointments.

The other cases—especially those involving Cardinals Müller and Pell—are of a somewhat different kettle of fish.

A number of the news stories and commentaries that followed Francis’s dismissal of the CDF prefect after only one five-year term in office complained that the Argentine pope is acting like an insensitive bully and a ruthless Latin American dictator. Some of their reports were simply made up, nothing more than fake news, which even Cardinal Müller has since acknowledged.

Nonetheless, it was curious that these writers, most of whom are über-papists, would accuse the pope of acting like an autocrat. These are the same people who would normally defend the “supreme, full, immediate and universal ordinary power” that Canon Law (c. 331) ascribes to the Bishop of Rome. During the last pontificate they loved reminding people “there is neither appeal nor recourse against a decision of the Roman Pontiff” (c. 332 par. 2).

Now they are complaining. And so is Cardinal Müller and a number of others who work in the Roman Curia.

The supporters of Cardinal Pell, for example, raise their own lament. They complain that Pope Francis has never given the Australian cardinal the necessary support he needs to clean up corruption and reform the archaic way the Vatican manages its financial resources.

Yes, you can hear lots of bellyaching going on right now among clerics and even some of the non-ordained baptized who have made their careers at Pope World on the Tiber. They have been slow to understand that Francis has bigger fish to fry than to sort out the petty squabbles and turf wars between Vatican chieftains and their minions.

The pope has warned time after time, and with the passion of an Old Testament prophet, against “the disease of gossiping, grumbling and back-biting.” Never was he so clear on this point as in his 2014 pre-Christmas address to curia officials.

He simply will not tolerate it or the people who engage in such “terrorism of gossip.”

And now, it seems, Francis has also decided that he will no longer put up with whiners who are supposed to be productive collaborators in his mission and administration.

“Complaining is forbidden,” says a witty sign that, for the past several weeks, has been hanging outside the door of his room and office at the Santa Marta Residence.  An Italian psychologist and motivational speaker named Salvo Noè gave it and one of his books to Francis during a recent general audience in St. Peter’s Square.

The sign, which Vatican Insider’s Andrea Tornielli brought to our attention, says people who violate the prohibition will be subject to “victim’s complex, with the resulting lack of good humor and the ability to resolve problems.” It adds that fines will be doubled for people who complain in the presence of children!

Its conclusion: “Stop complaining and do something to make your life better.”

Tornielli said he learned of the sign from a priest who recently visited the pope, adding that the cleric found Francis in a good and relaxed mood. The journalist said this was proof that reports saying the pope is somber and upset over all the “bad news” cited above are simply not true.

Those who think Francis is withering under criticism, complaints, fake news or even opposition to his reforms should think again. And anyone who is hoping that such negativity will drive him to finally take a summer vacation, perhaps to lick his wounds or re-think the way he is governing the Church, should place their hopes elsewhere.

There was a time when the June 29 feast of Saints Peter & Paul marked the de facto conclusion of the administrative year at the Vatican. The pope would escape the torrid Roman heat—and the Roman Curia—and go to the mountains or to Castel Gandalfo.

Thus “slow time” would be observed at the Vatican during the months of July and August, and even the early days of September. But when the pope’s away the mice (and schemers) can play.

This, too, has changed.

Francis has never gone on vacation. And it’s doubtful that he will be forced to retreat.

This article was updated on July 17 to note that there are six archbishops from religious orders who serve in major Vatican offices; not five, as earlier stated.