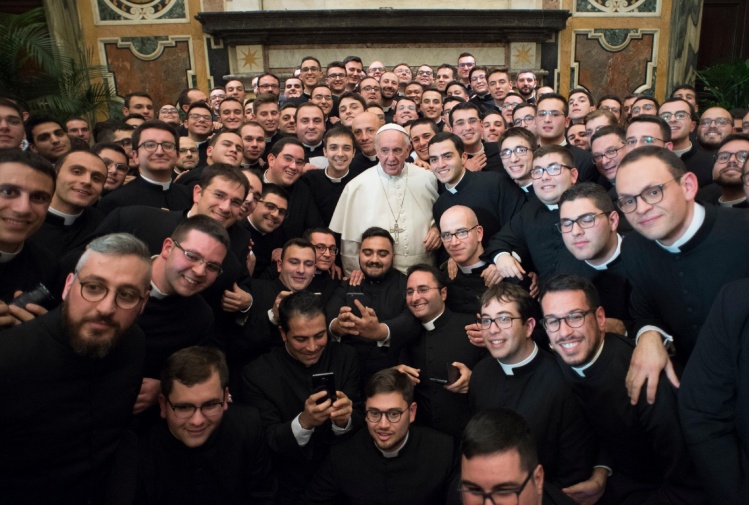 Pope Francis poses with seminarians from Pius XI Seminary during a meeting at the Vatican Dec. 10. CNS photo/L’Osservatore Romano

It is such a serious problem that, according to one noted church historian, not even Pope Francis dares to speak about it.

It’s the outdated model of Catholic priesthood and, even more significantly, how candidates for the ordained ministry are selected and prepared for service among the People of God.

Professor Alberto Melloni of the John XXII Foundation for Religious Sciences  (Bologna, Italy) recently pointed out that the archetype of today’s priest dates back to over 400 years ago and the reforms stemming from the Council of Trent (1545-1563).

“That remarkable sixteenth century invention that shaped the politics, mentality and interior life, as well as the art and theology of the West and its former colonies, did not die out (there are still roughly 420,000 priests in the world). But in the last century it has been in crisis,” noted Melloni in a March 22 article in the Rome-based daily, La Repubblica.

“Over the past ninety years in Italy we have gone from having nearly 15,000 to only 2,700 seminarians,” he pointed out.

But the enormous drop in numbers is not the most worrying sign of this outdated model of priesthood and seminary formation.

Instead, Melloni says it is the “drop in the intellectual quality” of the men who choose to join the priesthood and the bishops that ordain them. And, furthermore, it is the fact that the current system continues to be a breeding ground of the “vice” the professor correctly identifies as “clericalism.”

Melloni, the leading voice of the so-called “Bologna School,” argues that the “diminished role and affective negligence” of priests has led to the “exaltation of celibacy, which traps sexuality in a search for sublimation and attracts people to the priesthood who have unresolved (problems) or are even sick”.

Pope Francis has said as much on the numerous occasions he has talked about the selection and training of candidates for ordained ministry.

Already in November 2013 he told a closed-door gathering of men who head religious orders that badly formed priests often turn out to be “little monsters” who then “shape the People of God.” The pope said this gives him the “creeps.”

He went on to warn the superiors about the tendency of seminarians who “follow the rules smiling a lot” just to jump through the hoops to finish their formation and get ordained.

“This is hypocrisy that is the result of clericalism, which is one of the worst evils,” Francis said. (He made similar comments to religious superiors this past November.)

In 2015 he warned bishops and seminary formators to be wary of priesthood candidates who are “rigid” or, because they are “unconsciously aware” of having mental issues, “seek strong structures that will protect them in life.” He said this would turn out badly eventually.

Whenever Pope Francis has talked about the selection and training of Catholic priests he has given every indication that he knows there are serious problems. And it is no secret that we find the most obstinate opposition to his blueprint for Church renewal among seminarians, priests most recently ordained and those bishops that ordained them.

But, as Professor Melloni has shown, the pope cannot quite come around to naming the root cause of the problem—the woefully inadequate seminary system and the outdated model of priesthood it is perpetuating.

In fact, according to comments made less than four months after his election, Francis seems convinced that the current system should remain in tact.

“I always think of this: the worst seminary is better than no seminary! Why? Because community life is essential,” he said at a gathering of seminarians and novices of religious orders.

That may belie his formation in the Society of Jesus. Like the vast majority of religious orders, it is generally the rule (though there are exceptions) that Jesuits continue to live together in unisex communities of various sizes even beyond their novitiate and early formation.

Diocesan priests, on the other hand, tend to find themselves in pairs or, more frequently, alone. Their primary community is the parish, made up of men and women who are generally in families with children. It is not the all-male local presbyterate (that, is their brother priests in the diocese).

And yet, by and large, the Vatican-mandated seminary system dating from the mid-1500s continues give future parish priests an all-male, quasi-monastic formation. Women, for example, and men who are not priests most often constitute a minority presence in the seminary.

It is amazing how many of today’s seminaries still carefully regulate almost every waking hour of the seminarian’s day in a regimen that resembles a monastic horarium. These places of formation simply do not train men for the life they will be leading after ordination. Only during summer vacations do seminarians actually have the opportunity to live in a parish setting.

And, even then, they are with men with the same seminary background where the mentality of being a group (caste) set apart from the rest of the People of God is fostered and takes root.

This is a conundrum that needs to be carefully studied. And perhaps that work can begin in the Synod of Bishop when Pope Francis next convokes it in October 2018. The theme for that gathering, “Young People, Faith and Vocational Discernment”, could be a unique opportunity to expand the discussion on religious vocations to a wider and more courageous look at ministries in the church.

The pope earlier this month acknowledged in an interview with the German weekly, Die Zeit, that too few men were entering seminaries—at least in the developed world. He said that was partly due to low birth rates.

“And where there are no young men, there are no priests. That is a serious problem that we must tackle at the next Synod on youth,” he said.

“Lots of young people come who do not have vocations and they will ruin the church,” the pope continued.

“Selection is decisive, but so is people’s indignation,” Francis said.

They asked why there is no priest in their parish to celebrate the Eucharist, which the pope said “weakens the church, since a church without the Eucharist has no strength.”

Francis’ conclusion: “Priestly vocations are a problem, an enormous problem.”

The problem has been growing, even in the decades immediately preceding the Second Vatican Council (1962-1965). But as Alberto Melloni noted in his recent article, it’s a problem to which men in the church “have closed their eyes, particularly those who stand beneath episcopal mitres.”

That goes for quantity and quality.

Vatican II sought to bring the church and its Tridentine structures and mentality into the modern era. But it basically did nothing to update the doctrine and praxis of ministries in the church, let alone the types of candidates for ordained priesthood and the way they should be prepared or trained.

There were discussions on these matters in the early years after Vatican II, but not long after John Paul II was elected in 1978 efforts to further the reforming momentum of the Council were closed down.

“In fact, beginning in the mid-80s, up until the first decade of this century, under the pontificates of John Paul II and Benedict XVI we witnessed the prevalence of—not in a uniform, but even a heavy way—a strong discontinuity with Vatican II,” notes Andrea Grillo, a married layman who teaches theology and liturgy at the Pontifical Athenaeum of Sant’Anselmo in Rome.

Pope Francis has reconnected the church with Vatican II
sharetweet

He says Pope Francis has reconnected the church with Vatican II by reconfirming that the “way of the Council” is the path forward.

“In light of more than 30 years of a ‘lack of reception’ of the Council, the revival undertaken by Francis inevitably seems like an sudden acceleration,” he said.

But Professor Grillo says this is only because the last two popes had hit the “stand by” or “slow motion” button on Vatican II’s implementation. Instead, he says Pope Francis has hit the “play” button and, by doing so, has continued a process that was interrupted decades ago.

“The climate Francis has created upsets only those who are afraid of our deepest tradition and wish to cling exclusively to structures from the past,” says Grillo.

So where does this leave us with the urgent issue highlighted by Professor Melloni; that is, the need to radically rethink the figure, role and preparation of ordained priests?

The first thing to note is that the pope who said he’d rather have bad seminaries than no seminaries at all is the same pope who has shown a surprising capacity to listen, learn, and change his mind.

In the nearly four years since he made those comments, Francis has had a much greater opportunity to see and hear about the real state of seminarian formation all over the world. And one can imagine he has not found it a pretty sight.

But the pope is not fickle. He does not change his thinking or convictions on a whim. There is every indication that his thought process is closely guided by the continuous exercise of prayerful and lengthy discernment.

And that includes consultation, discussions, and debate with people of many different points of view who come from various experiences within the church.

Pope Francis understands the church and the world in which it finds its home is undergoing a massive transformation that must be navigated with boldness and creativity.

“One could say that today we are not living an epoch of change so much as an epochal change,” he told leaders (both laymen and clerics) of the Italian church back in 2015.

“The situations that we are living in today therefore pose new challenges which, at times, are also difficult for us to understand. Our time requires us to live problems as challenges and not as obstacles,” he said.

Francis then called for a “deep reflection on Evangelii gaudium to draw from it practical parameters and to launch its dispositions.”

And in the pages of this, the pope’s vision for renewing and reforming the church, one can find the rationale for taking a hard look at overhauling Catholic seminaries (though Francis never explicitly says so).

Early in Evangelii gaudium he admits “there are ecclesial structures that can hamper efforts at evangelization” (EG, 26).

Further he says he dreams of a “missionary option” that is “capable of transforming everything,” including the “Church’s customs, ways of doing things, times and schedules, language and structures” (EG, 27).

Transformation means change. And if we take the pope at his word then structures like seminaries can obviously be changed.

And he seems to think more than most bishops that the Catholics who are likely to demand the types of changes the church really needs are its younger members.

“Young people call us to renewed and expansive hope, for they represent new directions for humanity and open us up to the future, lest we cling to a nostalgia for structures and customs which are no longer life-giving in today’s world” (EG, 108).

Francis has urged young Catholics to add their voices – their hopes and concerns, joys and critiques – to the preparatory phase now underway for the next meeting of the Synod of Bishops.

Will the kids be bold enough to bring up the urgent problems that even he does not dare to speak about? And even if they do, will the bishops listen?