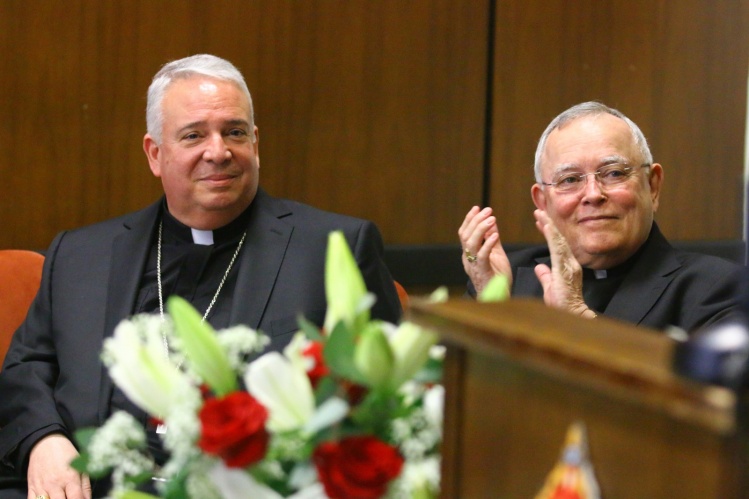 The recent retirement of Philadelphia Archbishop Charles Chaput, and Pope Francis’s subsequent appointment of Cleveland Bishop Nelson Perez as his successor, received more national media attention than the typical changing of the episcopal guard. For one thing, Chaput’s departure signals the end of an era in the city. But it also opens another window into how Catholics on opposite ends of the theological and political spectrum understand our church.

Both as archbishop of Denver and later of Philadelphia, Chaput established himself over more than a decade as an ambassador for a certain brand of culture-war Catholicism. In his archdiocesan newspaper, books, the journal First Things, and high-profile speeches, Chaput offered a vigorous, if nostalgic, proposal for the role of faith in the public square. He viewed hostile forces of secularism outside the church, and tepid orthodoxy inside of it, as relentless foes that needed to be fought without compromise.

If Pope Francis envisions a church that goes out, welcomes, and accompanies—a field hospital tending to the wounded—Chaput’s approach might be metaphorically represented as a fortress. Pulling up the drawbridge and hunkering down behind the walls, Catholicism would be safe from the myriad dangers presented by secularists, LGBTQ Catholics, Catholic Democrats, and progressive Catholics more broadly, of whom Chaput was often disdainful and dismissive.

At a 2016 symposium for bishops and their staff at the University of Notre Dame, Chaput denounced a culture that “bleaches out strong religious convictions in the name of liberal tolerance,” urged some Catholics to leave the church, and challenged the idea of inclusion:

Obviously we need to do everything we can to bring tepid Catholics back to active life in the church. But we should never be afraid of a smaller, lighter church if her members are also more faithful, more zealous, more missionary and more committed to holiness. Losing people who are members of the church in name only is an imaginary loss.

If ‘inclusive’ means including people who do not believe what the Catholic faith teaches and will not reform their lives according to what the church holds to be true, then inclusion is a form of lying. And it’s not just lying but an act of betrayal and violence against the rights of those who do believe and do seek to live according to God’s Word.

Fighting for those “things that matter”—opposing LGBTQ rights and abortion—seems to expiate for Chaput and other Catholics on the right many of the worst sins of Trumpism.
sharetweet

At that symposium, Chaput singled out Vice President Joe Biden and then vice-presidential candidate Sen. Tim Kaine for criticism, declaring that Catholics who fail to advocate for church teaching are “cowards.” The archbishop’s combination of theological and political fundamentalism lacked proportion and humility. His approach to faith in public life could feel formulaic and mechanistic. Deny Communion to Catholic politicians who object to criminalizing abortion. Refuse to allow the child of a gay couple to attend a Catholic school. “I don’t have all the answers,” Pope Francis once said. “I don’t even have all the questions.” It’s hard to imagine Chaput saying such a thing. Instead of approaching Catholic teaching as a living tradition—where prudence, conscience, and discernment are applied to complex realities—Chaput wielded doctrine and orthodoxy as weapons against enemies real and inflated. His self-certainty and grim fixation on threats to the church should provoke reflection on the damage that can be done in the name of zealously defending the faith.

Contrast Chaput’s approach to politics and public life with that expressed by Chicago Cardinal Blase Cupich in a recent speech at the Catholic Social Ministry Gathering in Washington, an annual event organized by the U.S. Conference of Catholic Bishops. In his keynote address, the cardinal underscored the Second Vatican Council’s emphasis on “a new way of being church and of understanding our baptismal call.” A consistent approach to life issues, he said, helps achieve “a proper balance as the church engages the world of politics and as we take up our ministry to the least in our midst.” This approach, Cupich said, “subverts any attempt to fragment our Catholic social teaching, pretending to offer so-called non-negotiables, which ends up reducing our moral tradition to a single set of issues.”

Archbishop Chaput, who in retirement will retain a public platform, seems unable to view faith in the public square in this expansive way. His 2010 article in First Things, “Catholics and the Next America,” was expressive of a mentality summarized by Pope John XXIII at the opening of the Second Vatican Council, when he challenged those in the church who are “prophets of gloom, who are always forecasting disaster.” In the article, Chaput sketched a dark picture, in which “years of soft atheism trickling down in a steady catechesis from our universities, social-science ‘helping professions,’ and entertainment and news media” had “eroded the country’s unofficial Christian assumptions, traditions and religion-friendly habits of thought and behavior.” Chaput wasn’t wrong about the waning of Christianity as a default cultural setting, especially on issues related to sexuality and gender. But his diagnosis was overreaching. And his proposed solution—a smaller, “purer” church with a Catholic approach to politics that accentuates a narrow list of non-negotiables—in fact often did more damage to his cause than even the most aggressive secularists. Chaput never seemed to seriously grapple with the fact that when bishops became culture warriors and aligned with one political party, many Catholics (especially millennials) tuned out. Nor did he seem to consider how the systematic failure of the church to police sexual predators in its own parishes, even while claiming the moral high ground on human sexuality, could be read as hypocritical. Might this have something to do with the atrophying of the muscular Catholicism he lamented?

The archbishop’s essay “Catholics and the Next America” inspired the founding of the Napa Institute, where wealthy, conservative Catholics and donors network to strategize a religious resistance movement to secularism’s advance. In its own strange way, the Napa crowd is an inclusive big tent, welcoming Catholics who have more in common with the U.S. Chamber of Commerce than Pope Francis and providing a forum for apologists for the president. Donald Trump “has been a hell of a good president for all the things that matter,” Republican Sen. Lindsey Graham said at last summer’s Napa retreat at the luxury Meritage Resort and Spa. Fighting for those “things that matter”—opposing LGBTQ rights and abortion—seems to expiate for Chaput and other Catholics on the right many of the worst sins of Trumpism: racism, sexism, and anti-immigrant nativism included.

If the hierarchy wants to reclaim some moral authority, shaping a better Catholic narrative in public life is a necessary step. This means expanding political engagement beyond the transactional pursuit of anti-abortion judges. It means more than narrowly defining Catholic identity and doctrine as “a rigid system closed in on itself,” as Pope Francis warns. A vibrant and healthy church will convey humility and avoid even the appearance of serving as an appendage to a single party. And yes, it will be more inclusive, and responsive to the wounded inside its congregations and outside its walls.