Leave It to the Laity 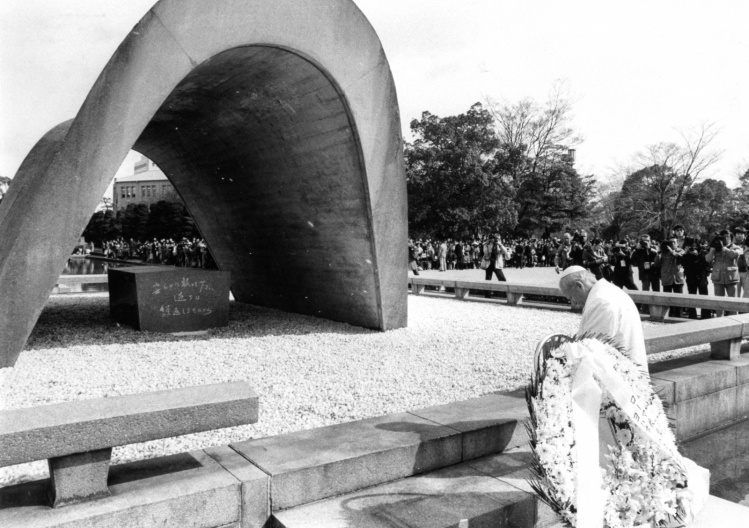 Then-Pope John Paul II prays in 1981 at a monument for the victims of the atomic bombing in Hiroshima, Japan. St. John Paul II made the first papal visit to Japan in 1981. (CNS photo/L'Osservatore Romano)

Deep into this highly valuable collection of essays, the moral theologian Martin Schlag notes the distinction drawn by Gustavo Gutiérrez between local churches that mirror their surrounding communities (iglesia-reflejo) and local churches that bring something new to the world (iglesia-fuente). For all its erudition, this collection reflects the ecclesial and political circumstances of its making. Call it scholarship-reflejo rather than fuente. But what a mirror! Not least among its virtues, it throws into stark relief the state of the Church in the United States and Europe.

Catholic social teaching (CST—where the “T” may also stand for thought or tradition) is often contrasted favorably with Catholic moral teaching, which has traditionally been focused on the permissibility of individual acts and is commonly identified with the magisterium’s condemnation of such practices as abortion, contraception, and euthanasia. The editors reject what E. Christian Brugger calls this “spurious conceptual bifurcation” and submit instead that the “exceptionless negative norms” of Catholic moral teaching and the positive principles of CST should be seen “as two sides...of the same moral concern” for integral human fulfillment. Gerard V. Bradley characterizes CST simply as “that part of the Good News that is about justice and genuine human flourishing in society.” Brugger and Bradley present their book, accordingly, as “a corrective to an ideologically lopsided body of literature” that dissents from Catholic moral teaching while celebrating CST as supposedly the best-kept secret of the Church.

Given the ideological impetus of their project, it is not surprising that some of the chapters are marred by swipes, barbs, and other irritable mental gestures directed toward Pope Francis, liberation theology, “Teilhardist” progressives, and lay ecclesial ministers, especially when they are women. There is some genuflecting toward Pope John Paul II as “the saintly pope”; by contrast, Daniel Mahoney’s chapter on Pope Francis’s social teaching is downright condescending. In a characteristic sentence, Mahoney reports that “I am troubled by Pope Francis’s increasing tendency to conflate Catholic wisdom with a left-leaning secular humanitarianism.”

On the whole, though, the essays are very impressive. (Mahoney’s, too, raises important questions about the role of markets in dealing with poverty and climate change.) The two chapters on the historical background of CST—one by John Finnis on Aquinas and the other by Thomas Behr on CST’s nineteenth-century context—are themselves nearly worth the book’s exorbitant price. They are followed by seven chapters of close readings of “the documentary tradition” from Leo XIII to Francis, eleven chapters investigating diverse themes of CST, and three chapters consisting of “evaluative and critical reflections.” The last of those chapters, “A Radical Critique of Catholic Social Teaching,” is also by Finnis, an Australian-born moral philosopher and legal scholar who now teaches at Notre Dame.

In his instructive chapter on CST and finance, Robert Kennedy notes that CST has been “shaped and elicited by challenges of the day,” with the result that it is “topical and not at all a systematic, comprehensive reflection on principles.” Building on the chapters devoted to close readings of major CST documents, the chapters on themes piece together oft-cited principles of CST like the common good; the so-called universal destination of the goods of creation (glossed by V. Bradley Lewis as “things are for people”); subsidiarity; and the preferential option for the poor. Catherine Ruth Pakaluk makes a compelling case that “socialism and communism are the founding heresies” of CST, to which it developed in reaction. Lewis underscores the classic conservative worry shaping early CST that “the reduction in the pluralism of institutions and communities in modern society...has left the individual face to face with the state.” Maria Catherine Cahill argues, along similar lines, that the main point of the principle of subsidiarity “is to say that associations exist independently of the state and prior to the state,” which should recognize a substantial measure of associational freedom “out of respect for [associations’] prior claims to self-government.” Martin Schlag’s chapter on the preferential option for the poor examines the influence of liberation theology and the closely related “theology of the people” on CST, leading, through the papacy of Paul VI, to Francis’s understanding of the poor as “teachers of what Christ wants the Church to know here and now.” Reflecting the classically conservative dimension of CST, Christopher Wolfe cautions that “the emphasis in modern CST on expanding powers of government to meet...obligations required by the common good has not been matched by a corresponding concern for institutional limits.”

Finnis and others in this volume are at pains to show that CST is not in fact the Democratic Party at prayer. Not even CST unites the faithful politically.
sharetweet

Two preoccupations that run through many of the essays mark the collection as a creature of its time and place: immigration and what Finnis calls “clerical overreach,” which undermines the right of lay people, not clergy, to determine the application of the principles of CST to the controversies of the day.

Kevin Flannery examines the philosophical basis of the tradition’s documents on immigration in the thought of Aquinas and the later Spanish scholastic Francisco de Vitoria. Against that background, Flannery argues that “a prudent authority of a sovereign polity would be obliged by natural law in the strongest manner—if not absolutely—to admit genuine refugees.” Likewise, he submits that justice calls for accepting a so-called economic immigrant (that is, an immigrant who finds a life of dignity is no longer available in her homeland), “provided it is likely that the person’s (or the family’s) acceptance will contribute to the good of the polity itself.” Flannery acknowledges that is a political judgment for secular authorities to make, but comments that it is likely the economic immigrant will benefit her new country, because it is natural for human beings “to find...their individual good” in the common good.

Other contributors, most vociferously Finnis in yet another contribution, favor a different prudential judgment. Writing on globalization, Finnis refers to “the bad side effects of multiethnicity and multiculturalism,” in particular the mixing of “politically opposing religions” (by which he seems to have in mind Islam with Christianity), and he has gentle words for “restrictive and ethnically selective policies such as those that culturally and economically stabilized the United States between 1924 and 1965.” On his reading, CST is compatible with and may even require

an immigration policy that, for the sake of the poorer and more vulnerable among the indigenous (national) population, restricts entry to persons of high and needed qualifications, and refuses entry to or deports those who have entered unlawfully (“without documentation”).

Finnis’s list of those who may be refused entry goes on—adherents of opposing religions appear again—but that quotation is enough to catch the whiff of MAGA, Brexit, and Orbánism in the air. Finnis and others in this volume are at pains to show that CST is not in fact the Democratic Party at prayer. Not even CST unites the faithful politically.

It is a familiar talking point that CST allows for divergent prudential judgments, whereas the “negative norms” of Catholic moral teaching permit no exceptions. Some of the essays simply repeat that point, but others dig deeper into its implications for the Church’s role in the modern world. Christopher Tollefsen’s chapter on the lay apostolate thoughtfully explores the relationship between the clergy and the laity, with an eye toward understanding why Vatican II’s charge that the lay apostolate “be broadened and intensified” has largely gone unheeded. Like Russell Shaw in a different chapter, Tollefsen points to the recent emphasis on lay ministry, as if serving as a lector or catechist substituted for working to ensure that “the divine law is inscribed into the life of the earthly city,” as Gaudium et spes enjoins.

Finnis’s “Radical Critique” of CST goes further in knocking clergy from positions of authority with respect to the “judgments about contingent facts, causalities, and probabilities” that must be made in applying the principles of CST to real social and political problems. According to him, “popes and other pastors should generally state only [the Church’s] timeless moral norms and general moral principles; if they teach anything beyond these as CST, it should always be in hypothetical form” (if the circumstances are such and such, then you should choose thus). The upshot is that much of “the praxis” of CST should be “remitted to the laity,” and popes should stop issuing such long—and sometimes poorly written and badly argued—documents that hardly anyone, other than scholars, reads in full.

Finnis has his axes to grind, and it is questionable whether, for example, the Diocese of Albany would have established its needle-exchange program for opioid addicts had its bishop not put his mind to CST. Also, it should be noted that there are often disputable judgments involved in the application of the Church’s negative moral norms. All that said, it is another sign of the times, and perhaps another effect of the clergy sex-abuse scandal, that even a very conservative Catholic like Finnis is done with clericalism.

Bernard G. Prusak, a regular contributor to Commonweal, is professor of philosophy and director of the McGowan Center for Ethics and Social Responsibility at King's College in Wilkes-Barre, Pennsylvania. He is the author of Catholic Moral Philosophy in Practice and Theory: An Introduction (Paulist Press, 2016).

What Is He Up To?