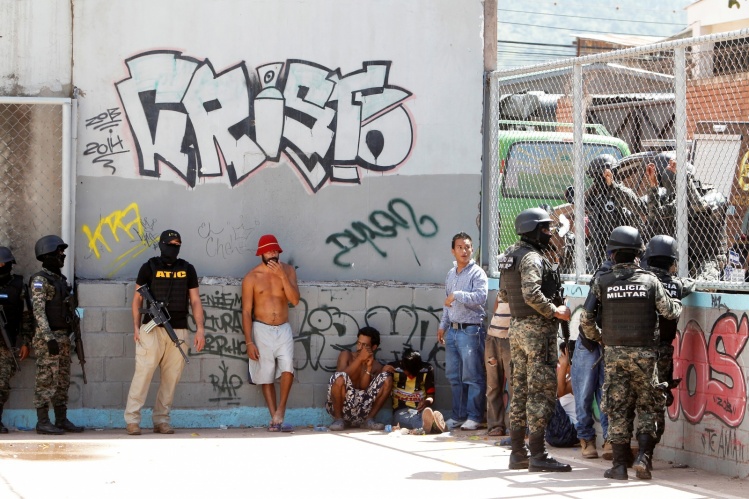 For most people in the United States, and for Catholics especially, the small Central American country of El Salvador is synonymous with instability and bloodshed. Indeed, civil war engulfed the nation for more than twelve years, beginning in 1979 and ending only in 1992. (Archbishop Óscar Romero’s shocking assassination, which followed his public denunciation of the atrocities committed by the government death squads against Salvadoran citizens, happened in 1980.) Less well known are the complex, long-term consequences of the Salvadoran conflict. It didn’t just result in the loss of more than 75,000 lives, with many more “disappeared.” The end of the war also set the stage for greater state repression, increased U.S. involvement, and the emergence of violent street gangs—the most notorious being Mara Salvatrucha, also known as MS-13.

Before it became a right-wing talking point, MS-13 began as a loosely organized, mostly ad-hoc Los Angeles neighborhood gang in the 1980s. It offered protection to the waves of immigrants then arriving from El Salvador, fending off the incursions of other more established LA street gangs like the Crips and Bloods. In the same years, the Reagan administration began aggressively deporting Salvadorans of all stripes, both MS-13 members and asylum seekers alike. The policy merely shifted the problem across the border. MS-13 continued to spread throughout Central America, and quickly began transforming itself into a sophisticated, highly organized, and well-connected criminal organization.

But what about its status today? In State of War: MS-13 and El Salvador’s World of Violence, journalist William Wheeler provides a corrective to the overly simplistic (and often outright racist) narratives that proliferate in contemporary American politics. The book makes clear that MS-13’s rise is complex, the result of several overlapping factors, including the generational trauma wrought by the civil war, the failures of interventionist U.S. foreign policy, and the Salvadoran government’s own corruption. There’s also the rise of violent international trafficking networks that transport drugs, guns, and humans—all destined for the United States—through Central America. Throughout his analysis, Wheeler embeds personal accounts from former and current gang members, politicians from both El Salvador and the United States, and Salvadoran police and military personnel. Readers are left with a nuanced portrait of MS-13’s rise to power in a nation mired in corruption and soaked in blood.

Though the civil war officially ended in 1992, violence has persisted ever since. In 2019, El Salvador ranked first in the world in violent deaths per capita, with nearly sixty-two homicides for every one hundred thousand citizens. As recently as last February, President Nayib Bukele ordered soldiers to storm parliament in order to force assembly members to approve a $109 million bill for new security equipment, including a helicopter for his personal use. In line with his campaign promises, Bukele’s current “territorial control strategy” calls for more crackdowns on gang violence. The strategy is hardly anything new; similar measures have been tried many times before, most recently in Francisco Flores’s 2003 Mano Dura (Iron Fist) policy.

As Wheeler makes clear, these repressive tactics usually have the opposite effect, consolidating gang membership and setting off massive spikes in violence. In 2003, Flores had modeled his zero-tolerance gang-abatement approach on similar policies in New York City and Los Angeles. Craving public admiration for being “tough on crime,” he exponentially increased the prison population in El Salvador. Somewhat ironically, consolidating gang members in a central location only made it easier for them to eliminate “snitches” through in-prison homicides. What’s more, the state’s open aggression alerted gangs to the need for greater anti-state organization. Gang members in turn devised plans to control entire neighborhoods, and even to infiltrate the government itself.

In the tranquil halls of academia, gang members are training to become lawyers, military intelligence officers, economists, and doctors.
sharetweet

Curiously (though perhaps not surprisingly), repressive police tactics also turned ordinary Salvadoran civilians against law enforcement by increasing their sympathy for gang members. In 2014, left-leaning President Salvador Sánchez Céren’s administration granted law enforcement free rein to employ lethal force against gangs. The policy was disastrous for local neighborhoods. The police didn’t just profile and violate the rights of unaffiliated young men; they unleashed a new cycle of violence, with a ferocity unseen since the civil war. One of Wheeler’s interviewees describes the tit-for-tat bloodshed that frequently occured between police and gang members: “The police live in the same communities that the gang members live in, and the gangs responded savagely. They killed children in front of their parents. They decapitated police in front of their children. They killed mothers and they raped wives. And the police responded with the same.” Quite contrary to his intention, then, Céren’s actions ended up uniting gang members and non-members alike against a common enemy: the Salvadoran state.

One of the strengths of Wheeler’s reporting is the way he probes Salvadoran history for sources of conflict that stretch back to before the civil war of the 1980s. Deep-seated class tensions have existed since El Salvador’s colonial period (circa 1600–1800) and these animosities continue in the present. In the chapter “Triangle of Power,” one interviewee, political scientist Dagoberto Gonzalez, offers a provocative overview of Salvadoran economic history. Gonzalez recounts how El Salvador’s oligarchs (the descendants of the earliest white European colonizers) amassed huge quantities of wealth through agriculture, forcing (mostly indigenous and African) slaves and peasants to perform the backbreaking work. The production of indigo, a plant used to dye textiles blue, enabled the ruling class to reap massive profits. But after the invention of chemical dyes in the nineteenth century, the oligarchs shifted their attention to coffee, which grew best on the ancestral lands inhabited by the poor. These now-valuable properties were abruptly expropriated through tortuous legal arrangements. The Salvadoran oligarchs, just fourteen families in total, even amended the country’s constitution to justify their theft.

According to Gonzalez, this nineteenth-century usurping of communal lands solidified the hostilities that would eventually lead to civil war in 1979. To broker the end of hostilities in 1992, unholy alliances formed, including one between the oligarchs and guerilla fighters. Many of those guerillas would later take part in the infamous death squads, responsible for scores of disappearances and murders. As Gonzalez argues, five separate blocs now control the country: landowning oligarchs, financial oligarchs (venture capitalists and bankers), guerrillas, drug traffickers, and the newly organized street gangs, MS-13 among them. Their collusion effectively guarantees their collective dominance over the country’s poor and politically disenfranchised.

It’s a truth that most Salvadorans today would prefer to deny. Government officials and business elites continue scapegoating gang members––especially those with tattoos and little formal education––as the true menace. Every presidential candidate since the civil war (including Bukele, the current president) has run on an aggressive anti-gang platform. And voters consistently point to gang control as their main electoral issue. Wheeler writes that “negotiation with the gangs is a fact of life in El Salvador.” But the ruling and financial elite continue to deny that they negotiate, much less collaborate, with gangs. Ironically, such intense public focus on street gangs allows oligarchs, guerrillas, and drug traffickers to commit their own illegal deeds in secret, away from the limelight.

The problem isn’t going away anytime soon. Wheeler points out that while most gang members still come from marginalized populations, a growing number “are to be found in universities as well.” In the tranquil halls of academia, gang members are training to become lawyers, military intelligence officers, economists, and doctors. Clearly, these gangs are morphing into more sophisticated criminal organizations, prompting some observers to consider them the new oligarchy. “The oligarchy doesn’t realize that power is running out of their hands,” Gonzalez states. “Another oligarchy is forming in the hands of the gang.”

So continues the cycle of corruption, violence, and hopelessness. This is true not only in El Salvador, but also in Honduras and Guatemala. These three nations form the infamous “Northern Triangle,” one of the Western Hemisphere’s poorest and most violent regions. Most migrants seeking asylum from the region in the United States are fleeing the very violence partially created by failed U.S. economic and security interventions there. Instead of helping these migrants, the Trump administration demonizes them as killers and rapists. Worse, in 2018, then-Attorney General Jeff Sessions ordered the removal of “credible fear” of gang and domestic violence as grounds for asylum, forcing migrants to seek protection from the very governments that regularly collude with the gangs that terrorized them in the first place. Returning to the Northern Triangle amounts to a death sentence for many, raising serious international-law and human-rights concerns.

Wheeler’s book does not prescribe solutions. Instead, it’s a somber reminder that often the most effective response to evil is to expose––to name––its operative power. It’s the only way to guard against fear-mongering and political scapegoating of already vulnerable targets. The need to do so is urgent. At the Republican National Convention, Florida Representative Matt Gaetz again parroted the divisive rhetoric of the Trump administration: “Democrats will disarm you, empty the prisons, lock you in your home, and invite MS-13 to live next door.” Nonsense. As politicians exploit the public’s fear of Latino gangs and white-supremacist groups continue wreaking havoc across the nation, it’s all the more imperative to see reality for what it is. Wheeler’s book takes a solid step in the direction of the truth.

Until the sheer complexity of the “gang problem” is understood and confronted, bloodshed will continue. Gangs are indeed a security issue, but they are by no means the only, or even the most serious, threat to local, regional, and global stability. Greed—personal, political, financial—is the real danger. State of War shines a light on the dark networks that conspire to maintain power and wealth at the cost of life and liberty.