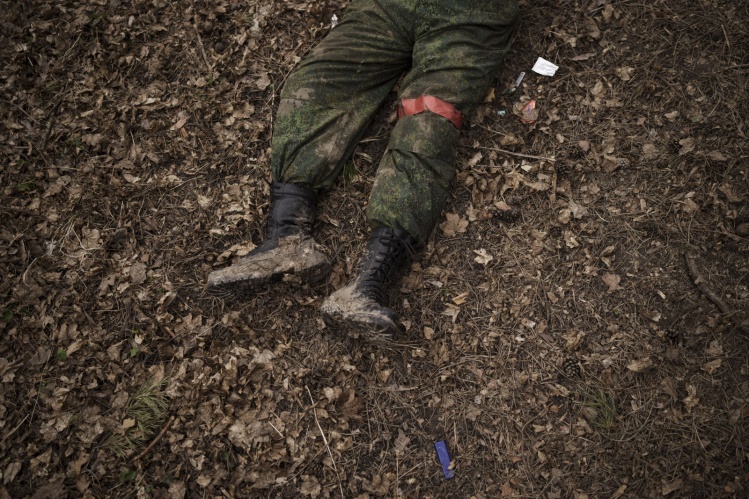 The body of a Russian soldier in Trostyanets, Ukraine, March 28, 2022 (AP Photo/Felipe Dana)

It was February 27, the fourth day of Russia’s war against Ukraine, and the Sunday of the Last Judgment in the Orthodox calendar. Epiphanius, Metropolitan of Kyiv and all Ukraine, published an open letter to Kirill, Patriarch of Moscow and all Russia. In it, Epiphanius scorns Kirill for political opportunism and cold-hearted abandonment of those Ukrainian citizens who belong to the Moscow Patriarchate: “Unfortunately, it has become clear from your previous public statements that maintaining the goodwill of Putin and the Russian Federation is much more important to you than caring for the people of Ukraine, some of whom considered you their shepherd before the war. Therefore it hardly makes sense to ask you to do something effective to stop Russia’s aggression against Ukraine immediately.” He went on to say, “If you cannot raise your voice against aggression, at least take the bodies of Russian soldiers whose lives have become the price for the ideas of the ‘Russian world,’ yours and your president’s.”

Was the reference to the unburied Russian soldiers merely a taunt? Apparently not. At that time, Ukraine was reporting that more than five thousand Russians had died in the first days of combat. The Ukrainians worked with the International Red Cross to repatriate the bodies, but the Russians were not cooperating. Ukraine even set up a website through which families could locate their dead, but it was immediately blocked in Russia.

Vladimir Putin’s political interests are served by keeping the body count a secret and suppressing evidence of Russian losses. A stream of corpses returning to the villages and towns of the Russian Federation would falsify his preferred narrative of a swift and successful “special military operation.” As the number of casualties continues to mount, so does the pressure to conceal them. Statistics on this question are impossible to verify, but on March 24 NATO estimated that between seven thousand and fifteen thousand Russian soldiers had died in Ukraine, whereas Russia’s defense ministry has admitted to only 1,351 deaths.

What could possibly override this politically motivated silence? Nothing so far has succeeded in doing so, yet it is worth noting that Epiphanius’s challenge to Kirill (“at least take the bodies”) draws force from a religio-cultural context that transcends the present regime. Respect for the dead is deeply ingrained in Eastern Orthodoxy. Cremation is forbidden and even embalming is frowned upon. An Orthodox funeral is an elaborate affair, involving home customs as well as church and graveside ceremonies. Other religious groups in the region (such as Muslims, Jews, and Western Christians) are likewise deeply concerned about giving the dead proper burial. Photographs of Orthodox funerals in Ukraine attest to the immense care taken in laying a body to rest—the abundance of flowers, even in wartime; the candles and vestments; the loaves of bread set atop the coffins; the processions and weeping—all underscore the importance of this transitus. Even nonbelievers in Russia hold secular “farewell ceremonies.” To abandon the dead is unthinkable. “Look, even when a cat or a dog dies, you don’t do that,” Ukrainian President Zelensky said in an interview with Russian journalists. “This is war. But it’s not cattle!”

The unburied bodies of Russian soldiers have become a leitmotif of the war in Ukraine.
sharetweet

Many in the West have hoped that as the bodies of the dead return to Russia, bereaved families will rise up against the war in Ukraine and public sentiment will turn against Putin. The Soldiers Mothers’ Committee helped to end the Soviet occupation of Afghanistan in just this way, as the dead speak a truth that won’t be silenced. No one, it is confidently assumed, could suppress the evidence of such losses forever.

As Lev Shlosberg, a Russian human rights advocate and deputy of the regional administration of Pskov, explained in a February article in La Nuova Europa, however, it is more than possible for Russia to do just that. He learned this the hard way in 2014, when he took up the case of thirteen soldiers stationed in Pskov whose deaths were linked to operations in the Donbas region of Ukraine. Their bodies were ultimately returned to the Pskov region, but their families received no information concerning the causes or place of their deaths. In response to Shlosberg’s complaint, authorities clarified that information concerning soldiers’ deaths is a state secret. In 2015, Putin’s Supreme Court made it official: death due to any military operation, not only in war but also in “special operations,” falls under the rubric of secrecy. When the Russian military uses mobile crematoria to dispose of the remains of fallen soldiers, their families will not be told where they died or where the ashes are scattered. Shlosberg wrote further that “I do not exclude that the relatives of the fallen will be required to sign (an absolutely illegal request, but they will do it) a commitment not to make public the news of the death of the relative ‘in the interests of the Russian Federation.’” The dead are simply erased.

The unburied bodies of Russian soldiers have become a leitmotif of the war in Ukraine. It is a horror acknowledged on both sides—by Ukrainians scandalized that Russians have resisted efforts to repatriate their dead, and by grieving families in the Russian Federation who await the return of the bodies with tears and frustration. They are the subject of woeful commentary by observers distressed by the specter of the mobile crematoria and the “erasure” of the Russian dead for propaganda purposes, and by pundits in the West who (so far, vainly) hope that an influx of corpses will turn the tide of public perception in Russia.

What do these unburied bodies represent? They have certainly become a sign and symbol of the inhumanity of the Russian regime as a whole. As Zelensky observed, “It’s scary because when you have such an attitude towards your own people, what kind of attitude [do you have] towards everyone else?” Yet the abandonment of the dead also raises an important challenge to our own society, in which the denial of death and suppression of traditional customs regarding death have long been on the rise. Can we really say we respect life, if we fail to treat the dead with respect?

Published in the May 2022 issue:
View Contents
Tags
Russia
Ukraine
War and Peace
Death and Dying