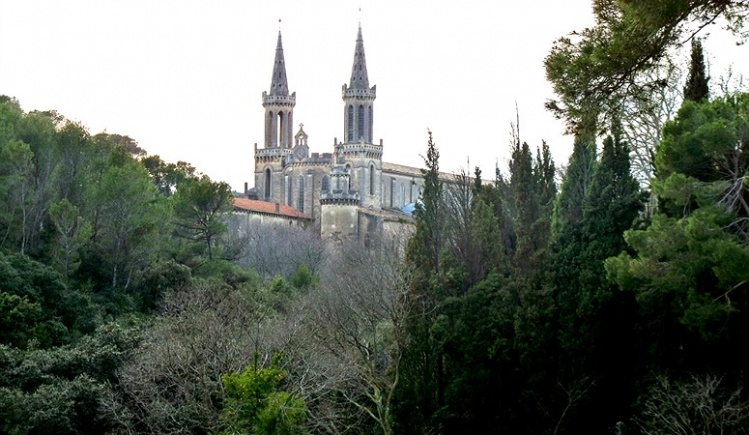 In 2004, my wife and I first visited the magnificent Abbaye Saint-Michel de Frigolet, set in rural Provence, near the Rhone, northwest of Marseilles. It seemed like a dying institution. We returned in 2014 to visit with Joël Houque of the Order of the Canons Regular of Prémontré, the Premonstratentians, who had been tasked to see whether Frigolet could be saved from closing.

Fr. Joël, now in his late sixties, met us at the massive doors of the rectory wearing his white alb. Born in northern France, he studied economics in Paris, spent two years working at an orphanage in Laos, and then found his calling as a Prémontré priest, becoming the leader of its Mondaye community, located near the Normandy beaches. The Prémontré Order was begun by a German priest, Norbert, in 1120, and today has communities in Europe, North and South America, Zaire, South Africa, India, and Australia. Norbert was canonized in 1582.

Frigolet Abbey was opened in 1858 by a French priest, Jean-Baptiste Boulbon. It had been established as a Benedictine monastery in the thirteenth century and fell into ruin after the French Revolution. It was Boulbon’s vision that inspired its restoration and elegant additions in the medieval revival fashion of the nineteenth century. A drawing hangs in the foyer of the rectory depicting his idea of a five-turreted, walled fortress of interconnected buildings, much of which was built before he died twenty-five years later.

Boulbon eventually brought the abbey into the Norbertine community, even though he was not a member of that order. He didn’t quite adhere to the order’s teaching, which includes a monastic life governed by liturgical prayer, pastoral work, and evangelization. But he did launch Frigolet’s restoration.

Twice since the abbey’s nineteenth-century reincarnation, seasons of demise and renewal have befallen Frigolet. Anti-clerical government policies shut it down—for a few years in 1880, and for two decades in the early twentieth century. Each time it was reborn to resume its mission as a religious, educational, and community institution.

Last year, facing closure again, Frère Joël was asked to advise the superior general of the Prémontré Order on the future of Frigolet. Joël had stepped down as abbot of Mondaye after battling a chronic blood cancer. In July 2014, he moved from Mondaye to Frigolet, arranged for local medical care, and settled into his spacious office with ancient furnishings and five computer screens to begin his review of the abbey’s workings.

When we visited Frigolet last year, we asked Joël what makes for a vital religious community. “New men,” he replied. Not money, not administrative acumen, but men. With them, the rest will follow. But a young man at the outset of his priestly ministry needs to be able to envision building a community, not managing its decline. While a certain tristesse draped the Frigolet, there was also hope. Joël had no personal agenda: he was able to bear the burden of a decision that had to be made, that no one would want to make. He was determined to cut back the vines so they could regrow.

Avoir confiance—have trust—we said as we bid farewell to Joël. We trusted that Frigolet would see another season. But Fr. Joël would not. He died on March 25, 2015, the Feast of the Annunciation. His mission to renew Frigolet had been completed. He had returned to Mondaye, where he had served most of his priesthood and had served as abbott. The community’s announcement read:

Our brother Joel came from Abbey Frigolet on March 17. He never left his room and ate very little. Friday night around 8:00 we needed to drive him to the Bayeux Hospital. For several days he faded, gradually. Yesterday morning at 7:45 he left for the house of the Father, the day of the Feast of the Annunciation.

The decision about Frigolet’s future turned on a choice between a community run by a different Catholic order or an independent Premonstratentian community. In late April 2015, the abbot general announced that Religiosi di Sant’Antimo, a community of Norbertines from Tuscany, would make Frigolet their own. Their membership is also limited and all are praying for a renaissance, a future of abundance for their new community and for Frigolet.

Lloyd I. Sederer is a psychiatrist and medical journalist.