Opening Up the Mass to Others
By Henry Frank
U.S. Catholicism
Ecumenism
Laity
Liturgy
Secularism and Modernity
Spirituality
Theology 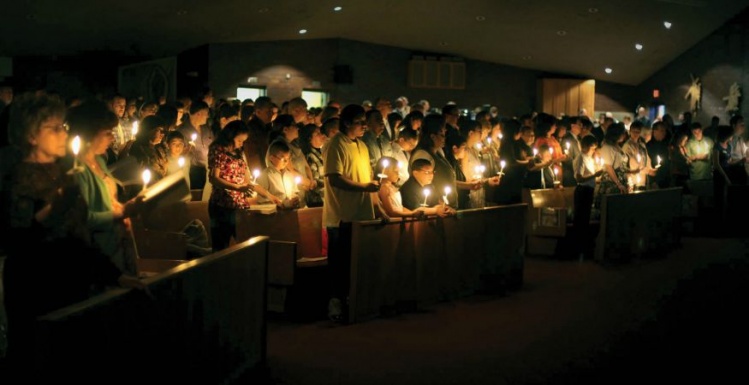 I recently married a non-Catholic. Kayla joins me for Mass from time to time, bringing with her the perspective of a guest. Her family did not go to church regularly when she was growing up; she never studied Catholic theology, either formally or informally; and she knows few Catholic practices and traditions. But that is exactly what makes her perspective so helpful for a Catholic like me. Even though I’ve had two years of graduate school in Catholic theology, her questions and comments provide me with something that none of my professors could. She is a guest at Mass, and as such she senses not only the beauty of Catholic worship, but also its strangeness.

Kayla came with me to the Easter Vigil last year, and she watched me and the rest of the congregation for the cues to stand, sit, and kneel. When our priest, who likes to joke, concluded the two-and-a-half-hour liturgy by saying, “The Mass is ended, alleluia,” she burst out laughing, thinking the alleluia was another of his jokes. I had to tell her it was not a joke but an exclamation of joy about the feast we celebrated. “Oh, right,” she said, “Easter, alleluia.” But her comment made me realize that the joyous point may have been lost somewhere between the congregation’s dampened response of alleluia and the staggered beginning of the recessional hymn. For the biggest celebration of the church year, the collective voice of the faithful did not even begin to fill the enormous gothic-style chapel—as my wife had not failed to notice.

Any familiar ritual involves some reflexive responses and gestures, but reflex is one thing, inattention another. Those of us who have gone to Mass our entire lives often find ourselves just going through the motions, responding at the appropriate times with the appropriate words and humming along with the appropriate tunes we know too well. It is not that I am indifferent at Mass, but I am comfortable with the way things are. I am familiar with the rituals, and I am disposed toward my regular hour of communal worship in much the same way every week. Kayla’s presence goads me to participate in, and think about, the whole thing more intently. Whatever benefits Mass may bring her, I am the beneficiary of her questions and observations. They never fail to challenge the more ossified aspects of my faith.

Kayla’s favorite part of the Mass is the Prayer of the Faithful, that brief moment in which we pause to pray for those in need of God’s grace. We direct our liturgy, prayer, and focus outward, beyond ourselves. We are the body of Christ, commissioned to care for the world God gives us. I think I knew all that, but the Prayer of the Faithful had never quite captured my imagination before. It does now.

One way to understand the Mass is as a retelling of the Parable of the Great Banquet. Think of that banquet from the perspective of the host. Here he is, midday on a Sunday, let’s say, with an empty dining room and a gourmet meal getting cold. Upset that his friends have not come, he invites anyone he can find on the streets—which means mostly the poor who have no meal of their own. In the end, the dining room is full, and the guests have a free meal. But the host has more than this. He has served the feast that Jesus commends in Luke 14—the feast for which he “will be repaid at the resurrection of the righteous.”

The significance of bringing guests to Mass has deep roots in the Christian tradition. Christ has called us all to be messengers of the Gospel, and the church calls us to be evangelists who continue to be evangelized. At the great banquet, Jesus tells us how the relationship between guest and host is inverted, each serving the other through his or her unique gifts. We Catholics have a beautiful church to offer our friends. And though they may not know when to sit or when to stand, their presence in mind and body has the potential to wake us from spiritual slumber.

Besides, we have the open seats.

Henry Frank is a 2014 graduate of Duke Divinity School.