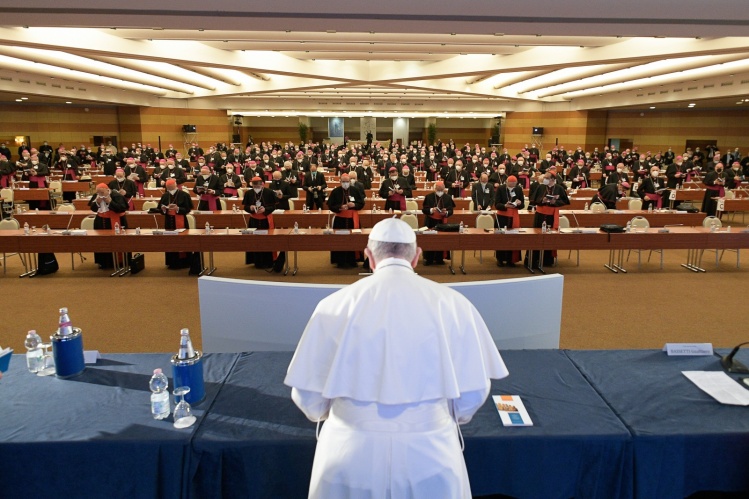 Pope Francis addresses an assembly of the Italian bishops' conference in Rome, May 24, 2021 (CNS photo/Vatican Media).

Earlier this month, more than a hundred Catholic parishes in Germany carried out priestly blessings of same-sex couples in defiance of the Vatican and the German bishops. The ceremonies were, in part, a response to the Congregation for the Doctrine of the Faith’s recent instruction forbidding such blessings and reiterating the Church’s traditional teaching regarding marriage and homosexual acts. Evidently, the ceremonies were performed mostly in more liberal German parishes and shunned in more conservative areas, an indication of a deepening disunity. Conservative Catholic commentators praised the CDF’s actions and characterized the blessings as schismatic.

But then the prefect of the CDF turned his attention to the United States. A number of American bishops want the U. S. Conference of Catholic Bishops to issue a statement urging that President Joe Biden be denied Communion because of his support for legal abortion and same-sex marriage. Much to the outrage of many of the same conservative Catholics who praised the Vatican for holding firm on sexual morality, Rome threw cold water on the wisdom of such a statement. Presumably such a confrontational step would, like the blessing of same-sex marriages, undermine the unity of the bishops’ conference and the larger Church. It would also require approval from the pope, who has cautioned that an obsession with abortion politics divides and distracts the Church. Conservative commentators deplored the Vatican’s interference, denouncing Rome’s supposed heavy hand in language one is more used to hearing from liberals.

During the papacies of John Paul II and Benedict XVI, conservative Catholics demanded complete fealty to the papacy and repeatedly urged the pope to rein in those they considered unorthodox. The removal of the editor of America magazine, Thomas Reese, SJ, was one of the more notorious Vatican actions during those years. But now that there’s a pope with a very different style and message, conservatives have decided that many of the decisions coming from Rome warrant skepticism and resistance, not obedience. You can call this intellectual inconsistency or hypocrisy, which in many instances it is. But it is as common among so-called progressive Catholics as it is among conservative ones. Predictably, there has been little criticism from progressives of the same-sex marriage blessings in Germany, even though those actions threaten the unity of the Church in the same way that the efforts of some American bishops to bar Biden from Communion do. Whatever one’s views on same-sex marriage, Catholics should be concerned that, while some find such gestures pastoral and compassionate, many others perceive them as signs of further fragmentation in the Church. Those who work for change should recognize that how change comes about can be just as important as the change itself.

The “party of change” must be capable of candor and self-criticism when it comes to defying Church teaching.
sharetweet

These conflicts reminded me of an incident involving Margaret O’Brien Steinfels, my predecessor as editor of Commonweal. She was invited to address the annual meeting of the Corps of Reserved Priests United for Service (CORPUS). Founded in 1974, the group was made up of resigned priests who had married but were still eager to perform priestly duties, and who were petitioning the Church to open the priesthood to married men and to women. A more inclusive priesthood was a goal she and Commonweal shared. It was only after accepting the invitation to speak that she learned the group planned to conduct a Eucharistic liturgy in defiance of their bishops and their status in canon law. She contemplated withdrawing from the program but decided instead to explain why she opposed such a liturgy. However “hopeful” she was about many aspects of CORPUS’s aims, she declared herself “heartsick” over the group’s intentions. I did not attend the talk, but I am told it was quite a tense interaction.

What is remarkable about her talk is how little has changed when it comes to polarization within the Church over issues such as the ordination of women and the politicization of the Eucharist. She especially objected to CORPUS using the liturgy as a “tool of agitation.” That “act of piety will certainly be reported as an act of defiance,” she correctly predicted. In her thinking, to celebrate such a liturgy was “wrong theologically, canonically, and ecclesiologically.” The “party of change”—a party she identified with—must be capable of candor and self-criticism when it comes to defying Church teaching. Most important, “it will not only be Church authorities but the ordinary people of God in parish pews who will be convinced that we who hope for change are not to be counted upon to act as though we were accountable to the whole Church.” She joked about “the Catholic rule of thumb, that anyone with a good idea for changing Church teaching or practice, I think here of John Courtney Murray, ought to be made to suffer for it.” And in a more pragmatic and prescient aside, she suggested that such actions would inevitably “forestall change.” Do not, she pleaded, “fracture the unity of the Church or the unity of the Eucharist.”

The liturgy went on despite these objections, and thirty years later the Church is even more fractured than it was then, the priesthood is in precarious shape, and the Catholic laity is increasingly fitful in their Eucharistic practice. Neither the “party of change” nor the party of resistance has been successful in renewing and revitalizing the Church. It would help if both sides admitted as much, and looked for ways to live and worship together rather than apart.