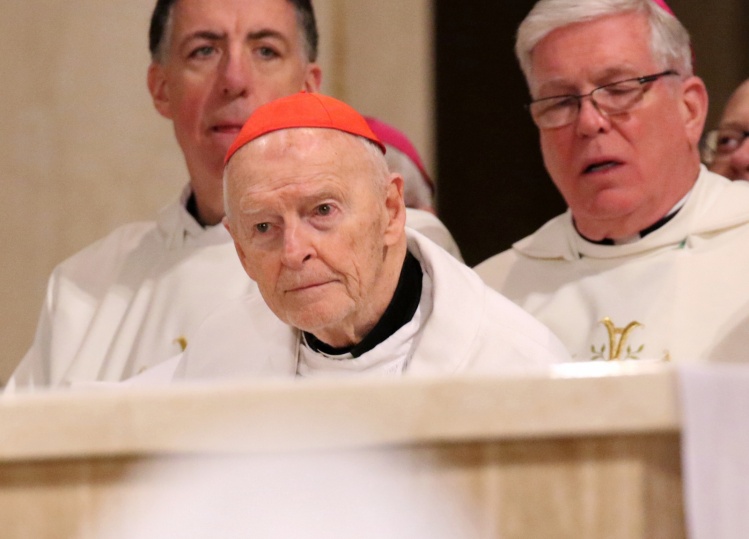 The U.S. Catholic bishops’ system for responding to allegations of clergy sexual abuse of children has shown itself effective if it can act decisively on an accusation against a churchman who once stood near the apex of ecclesial power, Cardinal Theodore McCarrick. But the cardinal’s downfall also shows the need for better, more transparent ways for responding to what may be just as widespread a problem within the church: sexual harassment of adults.

With the disclosure of the child molestation claim, two New Jersey dioceses McCarrick once led acknowledged that they had received three allegations “purporting that he had engaged in sexual improprieties with adults during his time here; two of these resulted in settlements.” The Newark and Metuchen dioceses added that “all were reported to law enforcement at that time.”

On that basis, mainstream news media began reporting longstanding accusations about McCarrick’s alleged sexual pursuit of seminarians and young priests. Previously, a number of reporters for major newspapers had tried but failed to verify these allegations.

The charge that McCarrick sexually assaulted a teenaged altar boy in the sacristy of St. Patrick’s Cathedral in New York forty-seven years ago—which a review board at the New York archdiocese found to be “credible and substantiated”—will advance to the Vatican for further review. McCarrick, who at eighty-seven years old has been a sort of international ambassador for the church since his retirement as archbishop of Washington in 2006, is barred meanwhile from publicly exercising his ministry as a priest. He says he is innocent, and he will have a chance to present his case.

It’s all relatively transparent. But the cases involving adults—alleged “improprieties” deemed serious enough for church officials to refer them to law enforcement at the time they were received—remain a matter of secrecy and speculation. The two settlements were reached out of court, before a lawsuit was filed, so there is not an official court record.

The wall of secrecy surrounding the harassment of priests and seminarians is particularly high, complicated by both canon and civil law.
sharetweet

Secrecy drove the scandal of clergy sexual abuse of children, allowing serial abusers to be transferred from one parish to another instead of expelled from the priesthood. Catholic priests were no more likely than other men to abuse children, but an institutional cover-up of their offenses helped the problem multiply. The question is whether this will apply to sexual harassment of adults, which, as various lawsuits have shown, also emerges in the church, as it does in any large institution. (The Metuchen and Newark dioceses say they have strong policies in place regarding harassment, discrimination, and boundary violations.)

The wall of secrecy surrounding the harassment of priests and seminarians is particularly high, complicated by both canon and civil law. “There are great impediments in both systems,” said Robert Hoatson, a former priest who filed a lawsuit with allegations ranging from his own victimization as a youth to harassment he experienced as a seminarian and priest, and finally, to ecclesial retaliation for having testified before a legislative committee about the church’s handling of clergy sexual abuse. Defendants included the Newark and New York archdioceses and the Christian Brothers, where Hoatson had served before becoming a priest.

An affidavit that a canon lawyer filed in Hoatson’s case on behalf of Newark’s archbishop at the time, John Myers, maintained that the church had authority to assign a priest in any way the archbishop wanted. “Since priests are ordained to serve in what is regarded as a divine calling, and not hired, the relationship of a priest to his diocesan bishop (and the diocesan bishop’s diocese) is not an employment relationship,” it said, adding that a priest “is committed for life to both serve that diocese as a cleric and to remain subject to the authority of the diocesan bishop.”

There is a deeply sacramental theology to this relationship. But is it meant to be used to stop a priest from calling for bishops to be held accountable for enabling crimes? The First Amendment rights for freedom of religious practice make it difficult to get an answer to that question in court.

Archbishop Myers placed Hoatson on administrative leave in December 2005 for filing the lawsuit; Hoatson’s case was later dismissed on legal grounds. Hoatson is now a well-known advocate for victims of clergy sexual abuse; he says he has helped some five thousand people. I asked him about the extent of sexual harassment of adults within the church in comparison to the clergy abuse of children.

“It could be as rampant,” he said.