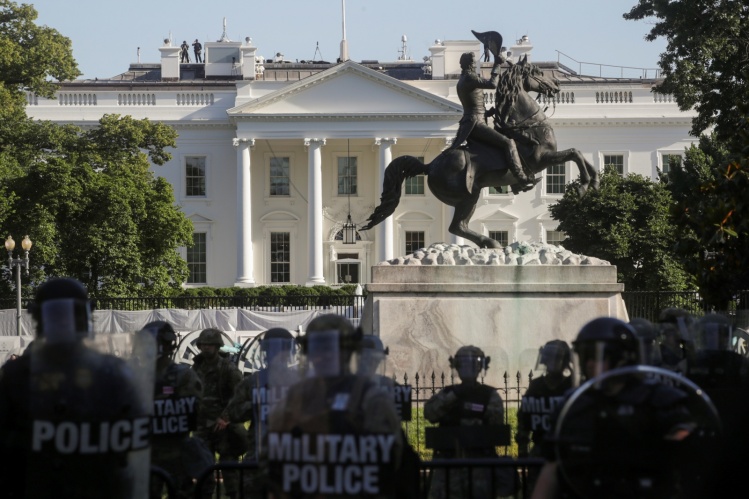 The National Guard is seen near the White House in Washington June 1, 2020. (CNS photo/Jonathan Ernst, Reuters)

The public response to the killing of George Floyd has overturned the newsrooms of some prominent media organizations, including the New York Times. The Times newsroom staged an “uprising” of its own after the paper published an op-ed by the conservative Arkansas senator Tom Cotton. In the early days of the Floyd protests, when looting broke out in many cities, Cotton called for the use of the military to suppress the violence. Led by a group of black Times employees, a majority of the newsroom signed a letter denouncing the decision to publish the op-ed. The letter claimed that publishing Cotton’s call for the use of the military in the streets of U.S. cities put black Times employees in danger.

The Times’s publisher, A. G. Sulzberger, disavowed the decision to publish the piece, and James Bennet, the editor of the op-ed page, submitted his resignation. Sulzberger promised that the operations of the opinion section would be overhauled to avoid any similar offense in the future. In submitting his resignation, Bennet confessed that he had not read Cotton’s piece before it appeared online. He also stated his belief that, when it comes to ideas, including bad ideas, “the right thing to do is expose them on our platform to public scrutiny and debate, and that’s the best way, that even dangerous ideas can be discarded.” Perhaps understandably, he said he is now reconsidering that approach to journalism.

The fact that Bennet had not read the piece before it was published online put him in an untenable position (it never appeared in the print edition). But given the sheer volume of material the opinion section produces each day, especially online, it is probably impossible for any one person to read everything. Some decisions about what to publish may have to be delegated to others. Beyond the dilemma of managerial responsibility for one’s staff, however, a much more important question remains: Why shouldn’t the Times publish a piece that advocates a course of action contrary to the political and cultural convictions of the paper’s staff? Isn’t that what a truly liberal opinion section is for?

The call to abandon efforts at objectivity sounds like something from a Fox News for the left.
sharetweet

Sulzberger told Times media columnist Ben Smith that Bennet’s removal was not a betrayal of traditional journalistic ethics. “We’re not retreating from the principles of independence and objectivity,” he said. However, he added, “We don’t pretend to be objective about things like human rights and racism.”

Not all Times writers agreed with Sulzberger’s rationale. “A strong paper and a strong democracy does not shy from many voices. And [Cotton’s op-ed] had clear news value,” wrote columnist Michael Powell. He called the publisher’s response an “embarrassing retreat from principle.”

In writing about the incident, Smith put the controversy in the broader context of the changing culture of today’s media. Online journalism is more personal, and reporters are more “willing to speak what they see as the truth without worrying about alienating conservatives.” He quotes former Washington Post reporter Wesley Lowery. “American view-from-nowhere, ‘objectivity’-obsessed, both-sides journalism is a failed experiment,” Lowery tweeted in the aftermath of Bennet’s resignation. “We need to rebuild our industry as one that operates from a place of moral clarity.”

There is much more that needs to be said, carefully and at length, about racial injustice in America. But it is generally a good rule of thumb to be wary of anyone who claims to have cornered the market on moral clarity. That’s a risky way for a journalist to proceed. Truth and moral clarity are both harder to come by if one insists on seeing every conflict through the lens of one overarching narrative—whether that narrative is about race, sex, economics, or even anti-Catholicism (some conservative Catholics sincerely believe that anti-Catholicism explains much of the agenda of the Times and liberalism generally). The call to abandon efforts at objectivity sounds like something from a Fox News for the left. Establishing what actually happened at a police shooting or during a looting spree or a pandemic can be exceedingly hard work. Journalists need to ask skeptical questions of both the police and the protesters, both medical experts and politicians. They can’t afford to be blinded by either credulity toward one side or condescension to the other.

“We don’t pretend to be objective about human rights or racism,” Sulzberger boasted. Does anyone? Nearly everyone claims to be a vigorous proponent of human rights and opposed to racism. It’s when you get down to specifics that events often lack a good deal of the clarity both Sulzberger and Lowery seem to take for granted. The Times, for example, is no believer in the human rights of the unborn. I can’t imagine there is more diversity of opinion about abortion in the newsroom than there was about Cotton’s repellent views. Will moral clarity and the truth about “human rights” soon compel the Times to ban prolife op-eds? And if not, why not?

The reaction to Cotton’s ill-conceived essay is not just a step on the slippery slope to intellectual conformity. It is illiberalism, full stop. Or, as James Bennet might say, it is the result of a dangerous idea that needs to be exposed to public scrutiny and discarded before it is too late.