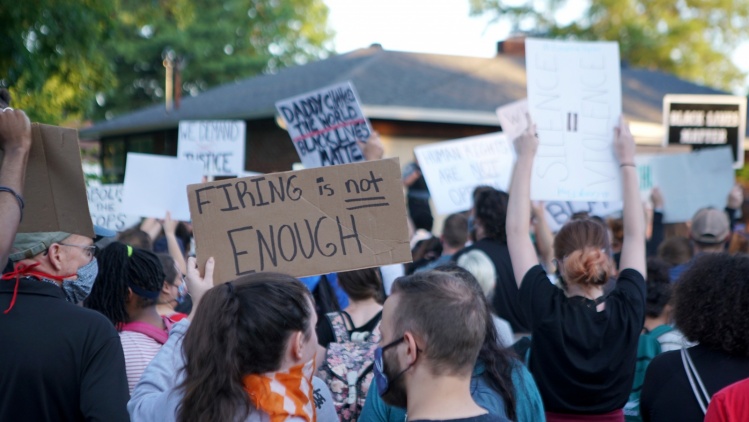 Protesters hold up placards as police officers guard the home of the mayor of Florissant, Mo., Tim Lowery, during a June 10, 2020, protest. (CNS photo/Lawrence Bryant, Reuters)

In the wake of George Floyd’s murder, I spent a night watching protests on television—buildings and police cars ablaze, protesters fleeing tear gas and rubber bullets. The next morning, I turned to James Baldwin’s 1963 nonfiction landmark, The Fire Next Time. Baldwin opens with a letter to his nephew on the centennial anniversary of emancipation (“You know, and I know, that the country is celebrating one hundred years of freedom one hundred years too soon”). He follows with “Down at the Cross,” a long essay which details his briefly intense religious adolescence and ultimate rejection of the church before describing his meeting with Elijah Muhammad, leader of the Nation of Islam. (Baldwin ultimately rejects Muhammad’s ideas as well.) In different ways, each part of The Fire Next Time allows Baldwin to reflect on the destructive tendency of white Americans—perhaps white American Christians most of all—to avoid self-scrutiny. That morning, the book helped me more clearly see this tendency in myself; it warned of complicity and complacency.

In Baldwin’s letter to his nephew, he accuses his countrymen of an unforgivable crime: “they have destroyed and are destroying hundreds of thousands of lives and do not know it and do not want to know it.” For Baldwin, the injustice of racism isn’t simply the carnage it’s caused, but also that its perpetrators and beneficiaries remain willfully ignorant: “it is not permissible that the authors of destruction should also be innocent. It is the innocence which constitutes the crime.” White Americans, watching protests from our homes, may consider ourselves innocent bystanders to this country’s racial injustices—but to believe in our own innocence is itself destructive. “Whatever white people do not know about Negroes,” Baldwin argues, “reveals precisely and inexorably, what they do not know about themselves.” In other words, white racism is a dangerous, collective form of self-delusion.

Baldwin’s reflections on religion make clear that this delusion is a particular affliction in the white church, visible in the failure of white Christians to live by the “Christian virtues” they espouse: justice, mercy, love of neighbor. Damningly, he argues that “those virtues preached but not practiced by the white world [are] merely another means of holding Negroes in subjection.” Christianity, in Baldwin’s view, whatever the intentions of some of its individual practitioners, has over history ultimately acted as a vehicle to maintain power and subjugate others: “Priests and nuns and school-teachers helped to protect and sanctify the power that was so ruthlessly being used by people who were indeed seeking a city, but not one in the heavens, and one to be made, very definitely, by captive hands.”

By now, more than fifty years after Baldwin wrote these words, we who call ourselves Christians are all too familiar with this argument about the Church. But perhaps we still secretly think of ourselves as innocent bystanders. After all, we’re not the flawed institution; we’re individuals. But Baldwin’s critique isn’t just about institutions. It’s about individual Christians who profess to believe something they don’t act on: “How can one respect, let alone adopt, the values of a people who do not, on any level whatever, live the way they say they do, or the way they say they should?” This discrepancy between our values and our lives is, in Baldwin’s view, another example of our dangerous tendency toward self-deception.

Self-scrutiny means nothing if awareness doesn’t lead to action.
sharetweet

As we grapple with the recent killings of George Floyd, Breonna Taylor, and many other black men and women, books written decades ago require us to confront this country’s long history of police brutality. Baldwin describes some of his own humiliating and terrifying encounters. At ten, two cops frisk him for no reason, joking about his “ancestry and probable sexual prowess” before leaving him flat on his back in an empty Harlem lot. At thirteen, he crosses Fifth Avenue on his way to the library; a cop in the middle of the street mutters a racial expletive, then tells Baldwin to go back where he belongs. Baldwin describes Nation of Islam street corner speeches: the “silent intensity” of the crowds who listen to them, and the police officers who “stood, in twos and threes and fours, in their Cub Scout uniforms and with their Cub Scout faces, totally prepared, as is the way with American he-men, for anything that could not be settled with a club or a fist or a gun.” “I might have pitied them,” Baldwin adds, “if I had not found myself in their hands so often and discovered through ugly experience, what they were like when they held the power and what they were like when you held the power.”

Baldwin doesn’t believe “civilized reason” or “Christian love” will stop those corrupted by power: “It was absolutely clear that the police would whip you and take you in as long as they could get away with it.” In his view, hoping for a change of heart from abusive police is another dangerous delusion. To be African American and grant the dignity of someone who doesn’t recognize your own can put you in grave danger: “I cannot risk assuming that the humanity of these people is more real to them than their uniforms.”

America’s long struggle with race is a “fearful and delicate problem, which compromises, when it does not corrupt, all the American efforts to build a better world—here, there, or anywhere.” And “it is for this reason,” Baldwin writes, “that everything white Americans think they believe in must now be reexamined.” Such a reexamination is difficult. Where does it start? Maybe with self-scrutiny; with confronting false assumptions about our own innocence; with addressing our reluctance to take any sense of ownership in addressing racial injustice.

I was born and raised in Houston, where George Floyd spent most of his life and where his funeral was held. I still live here, as does much of his family. George Floyd was my neighbor; to passively accept the nauseating circumstances of his death, then turn to other thoughts and topics, is a moral failure. But haven’t I accepted so many other equally unjust deaths in the very recent past?

Self-scrutiny, of course, means nothing if awareness doesn’t lead to action. Yes, reading can be a small, anti-racist act of solidarity, but only if we’re willing to open ourselves up to critique, and then only if we’re willing to take action once we, in Baldwin’s phrase, “arrive where reality is.” As he tells his nephew, “people find it very difficult to act on what they know. To act is to be committed, and to be committed is to be in danger.”

Last week, my wife and children and I drove into downtown Houston, where an estimated sixty thousand people were peacefully gathering to march in memorial of George Floyd’s life and protest his death. My family is still social distancing, so we didn’t march. We didn’t even get out of the car. We just drove around, nodding and smiling, honking at signs that told us to honk, then observing the marchers from a block away. We were bystanders.

Was I being safe or spineless? Probably both. As we drove around, I read the signs: silence is consent, silence is betrayal, silence is violence. Some point soon, I’m going to have to get out of the car, join these activists who’ve inherited the tradition that The Fire Next Time belongs to. At the end of the book, Baldwin writes: “We, with love, shall force our brothers to see themselves as they are, to cease fleeing reality and begin to change it.”