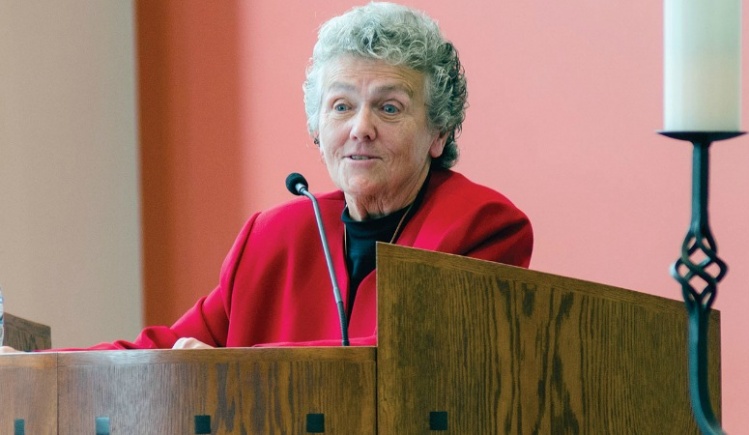 "We don’t change as we get older—we just get to be more of what we’ve always been.” So wrote Sister Joan Chittister, OSB, in The Gift of Years: Growing Old Gracefully. After reading Tom Roberts's new biography of Chittister, I wonder whether she would add that growing older also means coming to terms with who you have always been—and why. A full-length biography was on the minds of neither the author nor the subject when Roberts and Chittister met in Erie, Pennsylvania, in July 2011. Roberts’s purpose was to “update the file” on Chittister for the National Catholic Reporter (code for preparing her obituary). He began by observing that while he had known Chittister as a friend and NCR columnist for many years, he did not know much about her personal life. “Tell me who you are and where you come from,” he prompted. “Let’s begin at the beginning.”

And so Chittister did. Over the next four days, she shared with Roberts the story of an early life shaped by domestic violence and vulnerability. Chittister’s father, Daniel Daugherty, died when she was a toddler. Joan’s widowed mother, Loretta, soon married Harold “Dutch” Chittister, an alcoholic with a fierce temper who subjected her to physical abuse and consigned Joan to a childhood full of fear. It was only in 2011, at age seventy-five, that Joan was ready to tell this part of her life story. “It’s time,” she told Roberts.

Joan’s memories of her adoptive father show how complicated love and family life can be. Despite the trauma he inflicted, she was grateful to Dutch for providing materially for her and her mother, and remained so attached to him that she decided, as an adult, to keep his surname. And while Dutch, a non-Catholic, had refused to pay for her Catholic schooling and had initially been opposed to her entering the convent, he came to love the Benedictines. When Chittister contemplated leaving the community in the tumultuous early days of post–Vatican II renewal, it was Dutch who spoke to her about the bonds of love and loyalty.

Joan’s relationship with her mother was far more loving but equally complex. She remembers Loretta as a wisdom figure who did the best she could to protect her daughter and to remove obstacles in her way. When Joan first applied to enter the Benedictines, the prioress refused her permission; as an only child, she explained, Joan would need to care for her mother in her old age. It was only through Loretta’s insistence that the prioress relented. That prioress, it turned out, had proved oddly prescient. Loretta did indeed need to rely on her only child in her old age. Diagnosed with advanced Alzheimer’s disease, she moved into the Benedictine motherhouse where she was cared for by the entire community until her death four years later, a development made possible only by the Benedictines’ shift from an almost exclusive focus on education to a broader corporate commitment to social justice.

Through her leadership in the community and beyond, Chittister spearheaded that transition and the others that reshaped women’s religious life after the council. In 1971, she was elected president of the Federation of St. Scholastica, one of four Benedictine Federations in the United States. She would later be elected president of the Leadership Conference of Women Religious, prioress of the Erie Benedictines, and president of the Conference of Benedictine Prioresses. All the while she maintained a grueling speaking schedule and devoted significant time to her writing, emerging as a national and international authority on religious life and a prophetic and fearless advocate for women, a commitment she ascribes to her mother.

Loretta’s influence endures. Though her mother had died several years before, Joan sensed her presence at a pivotal moment in 2001, when she was informed that the Vatican’s Congregation for Institutes of Consecrated Life and Societies of Apostolic Life had demanded that the Benedictines forbid her from speaking at a conference on women’s ordination in Dublin, Ireland. She heard her mother tell her, “You go ahead and you’ll be all right. Do not be afraid.” She confesses to Roberts that, to this day, she struggles under the weight of her mother’s high expectations. This glimpse of vulnerability is difficult to square with the powerful and confident speaker many of us know Chittister to be, but it is one of the virtues of Roberts’s biography. The personal touches he inserts in the book—memories of her madcap spins on a motor boat around Lake Erie, for example, or the fact that she personally responds to each and every one of the thousands of emails she receives—give the reader an intimate portrait of a much-admired public figure.

The biography is also a love story about the Catholic sisters in Joan’s life. Joan’s earliest memories are of the Sisters of Mercy comforting her at her father’s funeral. Her fourth-grade teacher, a Sister of St. Joseph, secretly laundered her uniform when she spilled ink on it, avoiding a confrontation at home. More important, her teachers noticed and cultivated her manifest intellectual gifts. Sisters at Erie’s Benedictine Academy provided a work-study job to cover her high-school tuition, and, after one of them noticed she was skipping the noon meal in the cafeteria, arranged for her to have both lunch and dinner free of charge. Soon after she entered the Benedictines, the community provided support as she battled polio. The community eventually also sponsored her postgraduate education, a path certainly followed by many U.S. sisters but highly improbable for a member of a community that did not sponsor a college. A chance encounter at the University of Notre Dame led Chittister to Penn State in 1969, where she earned a PhD in speech communication in a record two-and-a-half years. The timing, it might be said, was perfect, in that she finished graduate school at the moment her gifts as a leader and speaker were most needed.

Apart from the early chapters, the biography does not provide much new substantive information about Chittister. Still, this account of Chittister’s life is compelling for the history it provides of women’s religious life over the past half century. It is, ultimately, a story not of one woman but of a generation of Catholic sisters that came of age in the heady decades that followed the Second Vatican Council, when transformations in church and society combined to restructure women’s religious life.

In the final chapters, Roberts weighs in on the ongoing debate over the wisdom and consequences of this restructuring. He cites the arguments of Ann Carey and others who would blame Chittister and her ilk for the decentralization of religious life and the decline in the numbers of U.S. Catholic sisters. Roberts clearly disagrees with this interpretation, and admires Chittister for performing what she calls her “ministry of irritation” within the church. Roberts quotes at length from a recent sociological study, New Generations of Catholic Sisters, which shows how generational analysis can confound ideologically based judgments Carey and others make about women’s religious life. Roberts’s book, perhaps unwittingly, also testifies to the benefit of using a generational lens. At one memorable moment during Chittister’s tenure as prioress, the community debated whether or not to erect a flagpole at the motherhouse. Chittister’s contemporaries, committed to peace, objected; her elders, who remembered brothers serving during World War II, felt differently about the American flag.

When I finished the book I thought far less about the generation that preceded Chittister than I did about those that follow her, in particular the millennials. Members of this generation are removed from those in Chittister’s cohort on at least two counts. They are not only more disconnected from the church but are also often suspicious of feminism, having learned about it more through its detractors than its advocates. In seeking simple ways to demystify feminism, I often rely on pithy quotes from Chittister. One of my favorites appeared in her regular NCR column, “From Where I Stand”: “Feminism is not about turning women into men or men into women. Feminism is about enabling both men and women to develop as full human beings.” These are words more young Catholic women need to hear. Those who are not already fans of Chittister might do well to first meet her without Roberts’s mediation, by reading her own beautiful and powerful prose.

Kathleen Sprows Cummings is an associate professor of American Studies at the University of Notre Dame. She holds a joint appointment in the Department of History, and serves as the William W. and Anna Jean Cushwa Director of the Cushwa Center for the Study of American Catholicism.