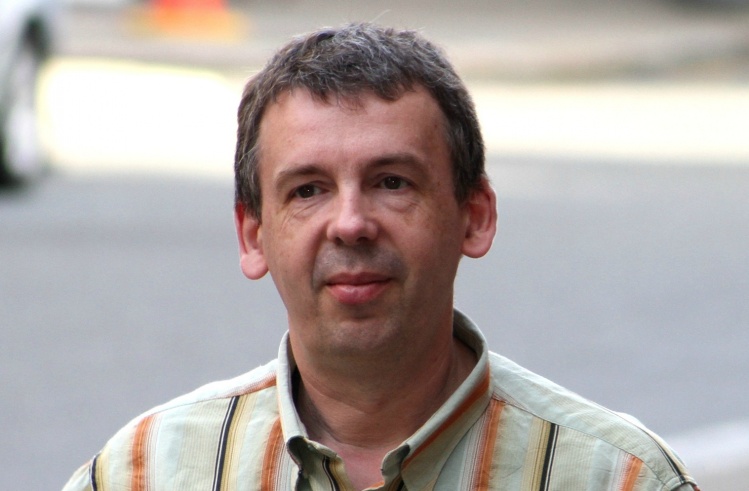 The current market for “introductory courses” in the Catholic faith is crowded but depressing. On the one hand, there are the safe, diocesan-approved catechetical textbooks—uninspiring and confident, every page pockmarked with references to the authoritative paragraph numbers of the Catechism of the Catholic Church. On the other, there is now Robert Barron’s popular Catholicism, a video extravaganza immersing us in traditional, even triumphal apologetics. All seem more likely to shore up the already convinced than to attract the unbeliever or the thoroughly lapsed.

Here, however, is a true outlier entering the lists. James Alison, the Oxford-educated theologian, itinerant speaker, and former Dominican, has spent the past dozen years developing his own approach to faith formation, Jesus the Forgiving Victim. His writing style alone (not to mention his ambiguous canonical status) marks him out from the start as playing an entirely different catechetical game; as Christopher Ruddy wrote here in 2009, Alison is “at once conversational and convoluted, witty and at times even campy.” The outline of his course is similarly original: nothing on such instructional staples as the Trinity and the seven sacraments, no checklist of the basics that need to be learned in time for Easter initiation. Instead, Alison dives deep on his own list of fundamental issues of theology and Scripture: what it means to have “faith” and how we get it, how we read and interpret biblical texts, what sacrifice has meant throughout Jewish and Christian tradition, what Jesus was here to tell us and why we obscure it and fail to understand it.

Two themes from Alison’s other work are central to Jesus the Forgiving Victim. The first is that Christians, to their detriment, have allowed the regulation of morality and behavior to overshadow the actual message of the gospel. “This, in my humble opinion,” writes Alison, “is part of the great collapse of Christianity over the last two hundred years in the West: it has become so exclusively linked to morals, and morals tied to a pre-existing theory, that it has been rendered boring.” Or, as he puts it even more succinctly, “being good or bad is not what it’s about. It’s about being loved.”

Now, it’s easy to imagine a doctrinal inspector at the Vatican marking up this last way of phrasing things as overstating the case (at best), and it does skate over the centrality of the word “repentance” in Jesus’ preaching. Alison is trying to administer a radical corrective to how the faith is often presented, and he backs it up with a sophistication and persuasiveness that usually justify his excesses. Nevertheless, readers should be aware that this is a “catechism” unmoored from the language and style our Catechism uses to say things, although it rarely contradicts the actual content.

Alison’s second central theme challenges the traditional theology of atonement, in which Jesus dies seemingly to satisfy God’s own requirement of compensatory sacrifice for human sin. Alison believes instead that we are the ones who demanded Jesus’ death, and that the crucifixion actually contradicts the idea that God in any way requires a death in order to be “satisfied.” (Alison’s development of this topic reflects the strong influence of anthropologist-philosopher René Girard, whose work sees Christ’s death and resurrection as the ultimate refutation of our human tendency towards scapegoating and violence.) Alison devotes almost an entire volume of his course to tracing the Old Testament’s practice and theology of sacrifice, a history now transformed by Christ into one we can read only from the victim’s perspective. That perspective of the victim also needs to shape the Christian moral life; as the story of the Good Samaritan tells us, “the attitude toward victims is the criterion for neighborliness.”

I can’t think of another theologian writing today who has me reaching so often to underline a quotable passage, or who finds more surprising depths in familiar Scriptures. Any homilist, for example, will find new insights in Alison’s line-by-line explication of the Our Father, or in his re-reading of St. Paul’s famous paean to love in 1 Corinthians, which (he reminds us) is not only about human love, but about God’s love directed to us. At its best, Alison’s writing resembles that of his great Dominican teacher Herbert McCabe: the same clarity, originality, and approachability, with, like McCabe, occasionally a bit too much readiness to write as if what has just been asserted is simpler and more self-evident than it actually is. (But then, what catechism doesn’t suffer from that flaw?)

It’s also fair to say that a few of Alison’s imaginative and rhetorical leaps come back to earth with a clunk, at least to my cynical ears. At one point, he imagines Jesus telling us, “Let’s see whether we can’t learn a new way of being together”—an Eewww! moment I can’t picture the real Jesus falling into. And in Alison’s central chapter on Jesus as victim, a too-long fictional parallel centers on a gay student viciously ostracized by his peers who returns to their school with tolerant forgiveness. It’s not the introduction of gayness as an example of victimhood that doesn’t fly, but rather the awkward dialogue and overextended symbolism.

For a free sample of the best of Alison’s course, go to his website and read his funny, imaginative essay on the church. Here, he presents a series of images—restaurant, portal, embassy, halfway house—vaguely reminiscent of Avery Dulles’s classic “models of the church” but with just the right edge of mischievous satire. In his first analogy, Alison asks us to imagine a restaurant with exceptional food prepared by a glorious, unseen chef, but with a dining experience undermined by the waiters, whose infighting, confusion, and arrogance overshadow (although not quite) the miraculous cooking:

They [the waiters] have a tendency to filter the very wide list of “specials” into something much narrower, which boosts their own understanding of what the restaurant is about and their place in it. They also come up with strange translations of the menu that make the food sound rather unpalatable.

If this sounds disrespectful, the humor is integral to his point: Our church’s misguided attempts to rein in and repackage the message of divine love at the core of the faith can, in fact, be comical. At the same time, Alison wants us to recognize that, despite the church’s laughable humanness, it is still an indispensable source of stability and orthodoxy. He asks: “How can you talk about a dynamic which enables you simultaneously to treat something [the church] extremely seriously, and yet not take it seriously at all?” Again, not a way of phrasing things that will please the inspector of doctrine, but many Commonweal readers will probably sympathize.

All in all, despite its originality and passion, it’s clear this is not a “course” that will find broad adoption in parish life. Even leaving aside the fundamental conservatism of those who choose catechetical materials, I find it hard to believe that the average neophyte could cope with some deep plunges into anthropology, hermeneutics, and Old Testament ritual, as Alison’s course does at various points. However, as a resource for either engaged Catholics or educated skeptics, Jesus the Forgiving Victim is a thought-provoking, engrossing presentation of faith that is also an excellent introduction to Alison himself. (Unfortunately, in book form it has been packaged inconveniently, and expensively, in a set of four little volumes with clip-art-quality covers.) Perhaps you can gather a couple of adventurous friends, believers or not, and do the course yourselves. You will find that few people make theology as interesting as this quirky, brilliant master teacher.