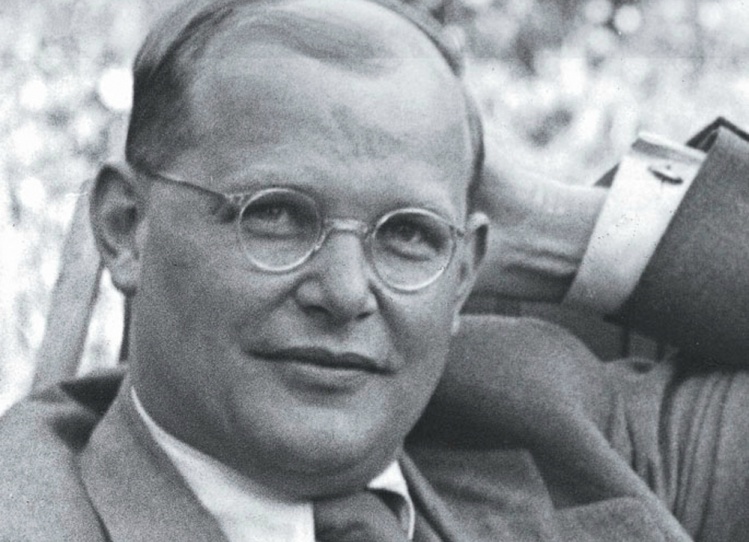 Writing in Commonweal in 1980, the historian David O’Brien famously referred to Dorothy Day as “the most significant, interesting, and influential person in the history of American Catholicism.” Historians more generally may yet render a similar judgment of Dietrich Bonhoeffer as the most significant and interesting figure in twentieth-century Christianity. One day perhaps they will deem him among the century’s most prophetic voices as well. This much appears certain: Nearly seventy years after his murder at the hands of Hitler’s SS, the witness that Bonhoeffer bore through his life has lost none of its power to illuminate, instruct, and challenge.

This splendid biography by Charles Marsh, professor of religious studies at the University of Virginia, does nothing to undermine and much to sustain Bonhoeffer’s stature as theologian, pastor, and martyr. Yet the real contribution of Strange Glory is to provide a rich and detailed account of how Bonhoeffer’s immensely eventful life unfolded—the personal, intellectual, and spiritual journey that ended in a Nazi concentration camp on April 9, 1945.

Marsh describes Bonhoeffer as “an exuberant and wide-eyed pilgrim,” a phrase that captures the book’s essential theme. As a young man, Bonhoeffer himself expressed a determination to live as “a sojourner on the earth.” But if the pilgrim earnestly sought a clearer understanding of man’s relationship with his creator, the journey itself did not require renunciation of what creation had to offer.

Raised in privileged circumstances, Bonhoeffer accepted privilege as his birthright. Here was a saintly figure who enjoyed good food, fine wine, and long vacations, preferably in sunny climes. Bonhoeffer collected art, books, and Persian rugs. He accumulated a library of phonograph records, his musical tastes ranging from classical symphonies to African-American spirituals. When he lived abroad for any period of time, his grand piano followed in due course. When it came to underwear, cotton would not do—he insisted on silk. In a day when private vehicle ownership was far from commonplace, Bonhoeffer had at his disposal both a smart Audi roadster and a motorcycle. As a backup, his father’s chauffeur-driven limousine stood at the ready. And should cash become a problem—as it did with some frequency—he simply asked and his parents provided.

With privilege came obligations. Bonhoeffer’s parents, Karl and Paula, inculcated into their eight children—born in 1906, Dietrich was third youngest—an affinity for learning, nature, and culture along with a commitment to service. Yet in the Bonhoeffer household, God did not occupy a place of prominence. So Dietrich’s announcement at age thirteen that he intended to become a theologian came as a considerable surprise—think of Malia Obama forgoing the Ivy League college she is destined to attend in favor of joining the Trappistines.

But if an exuberant pilgrim, Bonhoeffer was a determined one as well. When he set his mind to doing something, he did it. Parental reservations over his choice of professions would number among the least of the obstacles awaiting him.

A rigorous education ensued. First at Heidelberg and then at the University of Berlin, Bonhoeffer mastered “theology according to the rules of the guild.” By the 1920s, those rules emphasized a Christianity that marginalized Christ, finding value in the message while largely dispensing with the messenger.

The prodigiously talented Bonhoeffer sailed through the academic program, even while developing reservations about the liberal turn of German Protestant theology. Doubts, Marsh writes, eventually led him to reject that theology as “algebraic and wintry.” In its place, over time, came something more passionate and capacious. Bonhoeffer’s was a theology shaped by direct experience. In that regard, his real education occurred away from the university and gained momentum only after his formal schooling ended. His pilgrimage took him to Rome and Paris, where he felt himself drawn to the allure of Catholic ritual and spirituality; to Barcelona, where he preached to German expats about the “great loneliness that has come upon our age;” and to New York, where the famous faculty of Union Theological Seminary impressed him far less than did the buoyant services and applied Christianity he encountered nearby at Harlem’s Abyssinian Baptist Church.

FROM THESE AND FROM other travels that took him everywhere from Morocco to Mexico, Bonhoeffer drew two conclusions that transformed his theological perspective and put him on a collision course with the Nazi regime then coming to power in Germany. First, writes Marsh, Bonhoeffer became “a theologian of the concrete.” No longer viewing grace as an abstraction, he saw it instead, as “a divine verdict requiring obedience and action.” The beatitudes were not commendations or suggestions; they were directives. “The Sermon on the Mount had moved to the center of his thinking and there it would remain.” Second, as an antidote to ultra-nationalism and war, Bonhoeffer embraced a radical ecumenism. Beginning as a “radiant vision of Christian community,” his conception of ecumenism became more inclusive as the crisis into which Hitler was plunging Germany deepened.

The unity Bonhoeffer eventually envisioned allowed room for both Jews and nonbelievers. He came to view as self-evident “the equivalence before God of the church and the synagogue, between the body of Christ and the chosen people of Israel.” And as his own German church prostrated itself before the Nazi order, Bonhoeffer concluded that religion as such had become irredeemable. What survived, he wrote, was “only the garb in which Christianity is clothed.” As such, he saw no alternative but to strip away the garb, rebuilding from the ground up a Christianity that would transcend religion.

These discoveries occurred against a backdrop of intensifying but ultimately futile activism on Bonhoeffer’s part. Attempts to rally the German church to maintain its independence from the Third Reich fell flat. So too did pleas to European church leaders to come to the aid of their German brethren. Most dramatically, valiant efforts to build within Germany an alternative “confessing church” ended in failure, as did Bonhoeffer’s personal attempt, drawing on Catholic traditions, to create a new form of monasticism in a world seemingly headed for the abyss.

In the midst of these serial disappointments, Bonhoeffer fell deeply in love. The object of his affection was Eberhard Bethge, a student at Finkenwalde, the underground seminary that Bonhoeffer had founded in 1935. Bonhoeffer was immediately “smitten,” writes Marsh, and the two men became all but inseparable. They traveled together, frequently sharing the same room. They opened a joint bank account. When circumstance forced them apart—by 1941 Bethge was in the army—Bonhoeffer wrote his friend on at least a daily basis. In Eberhard, Dietrich had found his “soul mate.”

The bond between the two men “always strained toward the achievement of a romantic love,” Marsh observes, while adding that their relations were “ever chaste.” On that score, Strange Glory contains no hard evidence to the contrary. Yet given our present-day tendency to see sex as integral to genuine intimacy, the claim invites skepticism. Readers will make up their own mind.

Whatever Bonhoeffer sought from Bethge—at the very least, long-term exclusivity—was more than his friend was ultimately willing to give. This became clear toward the end of 1942 when Eberhard, age thirty-three, became betrothed to a young woman of seventeen. For Bonhoeffer, according to Marsh, this “threw everything out of balance.” Marsh speculates that with Bethge’s engagement, “sustaining a romance with a woman and thus keeping pace” now became for Bonhoeffer “a test of his own mettle.” Women had never previously interested Bonhoeffer. Now, after the briefest courtship, he announced his own engagement to Maria von Wedemeyer. Dietrich was then thirty-six. Maria was a mere eighteen and addressed her fiancé as “Pastor Bonhoeffer.”

You don’t need an advanced degree in psychology to sense more going on here than two happy couples pairing off. At any rate, Bonhoeffer’s union with Maria was destined never to happen. In the end, it was “his love for Bethge that would endure.”

ALONG WITH THIS personal upheaval came the developments that ultimately cost Bonhoeffer his life. As the Nazi regime tightened its grip and the war reached apocalyptic proportions, Bonhoeffer abandoned his longstanding commitment to nonviolence and enlisted in the anti-Hitler resistance. When he had first met Reinhold Niebuhr in New York, Bonhoeffer had come away unimpressed. Now, under extreme duress, his thinking assumed a Niebuhrean cast. In certain circumstances, he found, to “sin for the sake of righteousness” might become not only permissible but also imperative. In grappling with this conundrum, Marsh writes, Bonhoeffer “did not try to resolve the paradox by assuming moral innocence.” Instead, much like Niebuhr, he “accepted the paradox by incurring the guilt born of responsible action.”

Ill-suited to cloak-and-dagger work, Bonhoeffer played no more than a marginal role in the plot to eliminate Hitler. Although Marsh describes Bonhoeffer as a “minister to the conspirators,” that comes across as a stretch. Serving as an occasional courier, he was at most a bit player. Yet combined with his prior dissident activity, his participation sufficed to attract the attention of the Gestapo.

Arrest and imprisonment were only a matter of time. Bonhoeffer’s time came in April 1943 and landed him in Berlin’s Tegel prison. Astonishingly, with the German capital under regular Allied bombardment, Bonhoeffer continued even as a prisoner to enjoy a privileged existence. During his confinement in Tegel, according to Marsh, he received “extra portions of food, hot coffee, and cigarettes.” Visitors brought flowers and fresh fruit. An uncle stopped by to break open a bottle of champagne. Most importantly, Bonhoeffer had access to books, pen, and paper. During his confinement, he read and wrote ceaselessly.

All such niceties vanished in the crackdown that followed the failed July 1944 attempt to assassinate Hitler. Transferred to the custody of the SS, Bonhoeffer was moved to Buchenwald and then to Flossenbürg, where he was finally executed. Little reliable information about Bonhoeffer’s last days is available, and Marsh does not pretend otherwise. That the end was grim and brutal suffices.

In 1928, on the cusp of his journey of discovery, Bonhoeffer had observed that in modern life “religion plays the part of the parlor.” It had become a place “into which one doesn’t mind withdrawing for a couple of hours, but from which one then immediately returns to one’s business.” In our own day, faith remains in the parlor, the subject of polite and passing attention. The work that matters happens elsewhere. For Christians daring to rethink that proposition, Bonhoeffer’s life serves as an object lesson in what is to be gained—and lost.