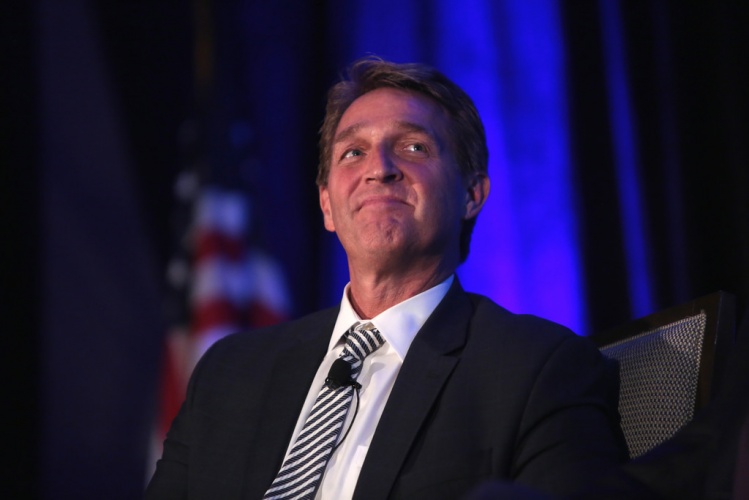 Two weeks ago, I sent a letter to Arizona Senator Jeff Flake—a thank you letter. I’m a liberal living in Connecticut, and writing to praise a red-state social conservative isn’t something I do. But the day before, Flake had made a startling, seventeen-minute speech on the floor of the Senate (you can read it here), harshly criticizing President Trump for his “coarseness,” “destructiveness,” and “reckless, outrageous, and undignified behavior.” “Giving in to the impulse to scapegoat and belittle,” Flake said, “threatens to turn us into a fearful, backward-looking people.”

It’s hard to pick the most dismal aspect of our life under the Trump administration. There are so many candidates: the transformation of the Environmental Protection Agency into the Environmental Destruction Agency; our ongoing nuclear Russian roulette with North Korea; tax breaks for gazillionaires; and on and on. But however awful the content of the administration’s program, the degradation of our political discourse might be still worse. A perfect storm of well-documented factors—extreme partisanship amplified by social media, plus a raucously profane president who has normalized taunting as the rhetoric of leadership, plus the relentless degradations of talk-radio, plus the proliferation of digital echo chambers where partisans shelter and never experience any input other than those that reinforce their biases: all of it together has obliterated what used to pass for a civic, and even at times civil, discourse.

Do you find it dismaying almost beyond belief? I do.

This is the post-reality-based society brought to its full and bitter fruition.
sharetweet

Part of this dismay, for the many millions of Americans who gape daily at the latest presidential disgrace, is that so many other millions of Americans just don’t register it—or, rather, they can’t, or won’t. If you’re a Democrat, any attempt you make to point out how bizarre and outrageous things are is dismissed as mere partisanship. Fake news! This is the post-reality-based society brought to its full and bitter fruition. We’ve reached a point where not only all opinions and interpretations, but seemingly all perceptions, are no more than tactical expressions of partisan interests. It’s a cynicism so sweeping that people don’t even recognize it anymore.

I’m a lifelong Democrat and resident of a deep-blue state. But though I’m guessing that you and I would check opposite boxes on nine out of ten political issues, I wanted you to know how grateful I am for your forthrightness and political courage in going public with your estimate of our president’s unfitness, and of the damage he is doing to the office and to our civic discourse.

In my dealings with friends who voted for Donald Trump, I’ve been frustrated by my failure to convince them that opposing him isn’t just partisan politics. I mean it when I tell them that had Trump emerged as the Democratic nominee—a not-entirely unimaginable occurrence, given his plasticity on issues and his generously bipartisan political donation habits over the decades—I would have done everything I could to help the Republican nominee prevail. Ted Cruz is anathema to me, but I don’t suspect him of being deranged.

As a rule I’m dismissive when fellow liberals and progressives lazily toss the “fascist” accusation around. But not this time. Inciting rally crowds to violence; chanting “lock her up!” about the opposing candidate; urging police officers to treat arrested suspects more roughly; threatening flag-burning protestors with loss of citizenship; mocking the disabled; slandering Mexicans as rapists and criminals; crassly demeaning women; conducting frivolous and vituperative feuds via social media; replacing presidential gravity with sarcasm, belligerence, and whim; minimizing the danger of white supremacists and thereby normalizing a toxic and lunatic discourse; and on and on and on: Trump has campaigned and governed with a thuggishness reminiscent of the darkest days of 20th century European authoritarianism.

It is dismaying and frankly scandalous that so many people are proving unwilling to call this out for what it is. George Bush was correct the other night to say that we are experiencing “blasphemy against the American creed.” And you are absolutely right to insist that we must never regard this as normal.

I’m convinced that many more sane and principled conservatives and Republicans feel as you do about Donald Trump, but are cravenly unwilling to come out with it. Though it won’t help you in your state, I wanted to say thanks to you for speaking out. You did your nation a BADLY needed service.

OK, maybe the Ted Cruz line was a tad hyperbolic (I do think he’s a little bit deranged). But you get what I mean. And it turns out that countless other Americans felt exactly the same way. In a recent op-ed in the New York Times, Flake reports getting thousands of calls and letters, from people all across the country and of all political stripes—“a deeply personal outpouring,” he writes, “the scale of which has stunned and humbled me.” While noting their many differences in viewpoint, Flake says that the letters “all are plaintive, anguished, deeply engaged and urgent,” and that they convey a surging “anxiety... [at] the moral vandalism that has been set loose in our culture, as well as the seeming disregard for the institutions of American democracy.”

Gradually, the list of Republican politicians willing to express their dismay grows longer, and brings us day by day closer to getting this hapless, reckless, and dangerous person out of the White House. Bush (whose talk the other week you can read here), Corker, McCain, Flake: I’m in their debt.

Part of the impulse to write to Flake was a profound feeling, at a deep level, of relief. So they actually do see and hear what I see and hear. Phew! Toward the end of his speech to his fellow senators, Flake offered this perspective on the nightmare we find ourselves in. “This spell will eventually break,” he said. “That is my belief. We will return to ourselves once more, and I say the sooner the better.”