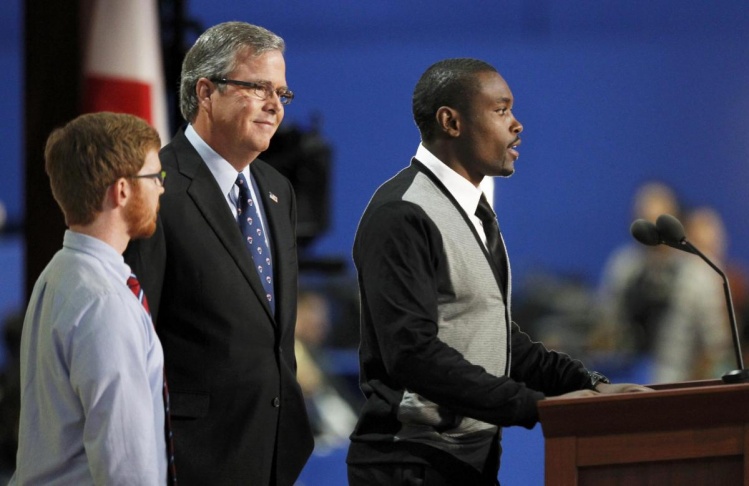 Am I am the only person outside the Bush family who has a smidgen of empathy for Jeb Bush’s roller-coaster ride in trying to answer a straightforward question: Was going to war in Iraq the right thing to do?

It’s hard to go much beyond “smidgen” because it remains astonishing that Bush hadn’t worked out long in advance how he’d grapple with an inevitable query about the invasion his brother launched. Jeb’s responses over four days were, as The Washington Post’s Philip Rucker and Ed O’Keefe wrote, “wavering, uncertain and incongruous.”

The saga began when Fox News’s Megyn Kelly asked Jeb if, knowing all we know now, he would have gone to war. “I would have, and so would have Hillary Clinton, just to remind everybody,” Jeb replied. “And so would have almost everybody that was confronted with the intelligence they got.”

Bang! The political world, including conservatives who had strongly supported George W.’s foreign policy, came down on him hard. After going this way and that, Jeb admitted defeat on Thursday. He mixed the first-person singular and plural with the second person in, finally, responding to Kelly’s original question. “Knowing what we know now, what would you have done? I would have not engaged. I would not have gone into Iraq.”

So why have any sympathy for him at all? The main reason is very old-fashioned: His apparent reluctance to throw his own brother under the bus. In justifying his initial answer, Jeb later used his own reframing of Kelly’s words as an excuse, explaining he hadn’t understood the “know now” part. But it’s just as possible that he knew perfectly well what Kelly had asked -- Jeb Bush is not stupid -- and hoped he could get away with answering a different question by way of avoiding being disloyal to George W.

Loyalty is a virtue in rather short supply in our culture, so I admire it when I see it. Of course it can be misplaced. There are times when other virtues should trump it. But loyalty does matter, and I have some respect for Jeb for trying to stay true to his family ties over four utterly miserable days.

Still, there are more important issues here than family. Jeb’s agony isn’t over because Iraq raises profound questions not only for him but also for all of his GOP opponents. If Jeb’s initial answer about the war was wrong and his most recent answer was right, this means that opponents of the war were also right. They included a young Illinois state senator, Barack Obama, who predicted in 2002 that “even a successful war against Iraq will require a U.S. occupation of undetermined length, at undetermined cost, with undetermined consequences.”

Many of the war’s staunchest supporters understand that they can never concede that Obama was right because doing so would undermine their ongoing defense of a hyperinterventionist foreign policy. That’s why some of them remain unrepentant. “I believed in it then,” former Vice President Dick Cheney said of the war to Politico’s Mike Allen last July. “I look back on it now, it was absolutely the right thing to do.”

Bill Kristol, one of the war’s leading promoters, told CNN last June: “I’m not apologizing for something that I think was not wrong. I think going to war to remove Saddam was the right thing to do and necessary and just thing to do.” Donald Rumsfeld, George W.’s first secretary of Defense, said that it would have been “immoral” not to go to Iraq.

But other hawks would rather see the was-the-Iraq-War-right question magically disappear because they know it’s a no-win for them. Most Americans now think the war was ill-advised. Why remind them that most of the same people who are super hawks now brought them an adventure they deeply regret? Thus did The Wall Street Journal editorial page on Friday come out firmly and unequivocally in favor of -- evasion. “The right answer to the question is that it’s not a useful or instructive one to answer, because statesmanship, like life, is not conducted in hindsight.”

Sorry, but inquiring minds will want all the candidates to offer a straight answer. This means that Bush’s Republican opponents will have to do more than trash his botched dodging. Bush at least had the excuse that he didn’t want to speak ill of his brother. The rest of them still need to explain how their own views of the past relate to where they’ll take us in the future.