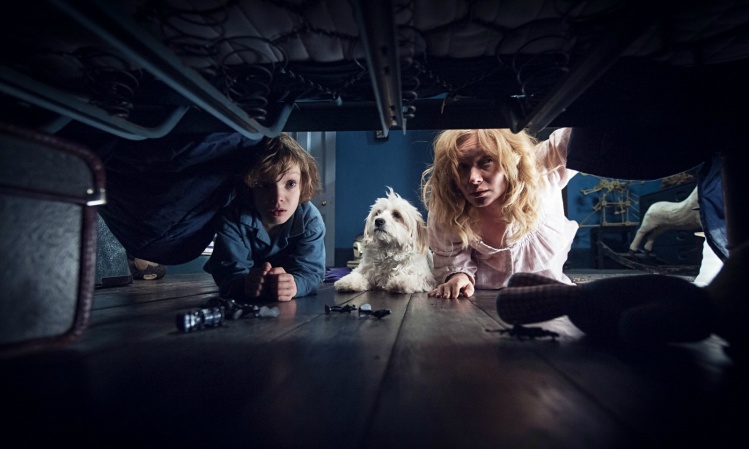 My pleasure in being scared silly by movies dates to age eight, when I shrieked in my seat as a murderous Alan Arkin, kitchen knife flashing, hunted Audrey Hepburn in Wait Until Dark. Ever since, I have taken guilty pleasure in horror movies, terror movies, thrillers, suspense, and all films whose goal is to make you feel temporarily unsafe in the world. You either crave this kind of thing or (like my wife) you detest and avoid it, finding real life already unsettling enough on its own.

As the aficionado knows, there are many, many cinematic ways to rattle people. Some movies derange you through sheer suffocating entrapment, like Neil Marshall’s spelunking nightmare, The Descent, in which a group of women lose their way in a cave populated by ghouls. Stalker movies like Halloween turn you into prey; harrowing portrayals of sibling hatreds, as in What Ever Happened to Baby Jane?, plumb your anxiety about family; mind-bending forays into paranoia, such as Roman Polanski’s Repulsion or The Tenant, excite your deep fear of losing your mind. Some scary movies blur dream and reality together, as in The Cabinet of Dr. Caligari, Nightmare on Elm Street, or the shocking close of Carrie. Elsewhere, nature runs amok (The Birds, Jaws), the devil runs amok (The Omen, The Exorcist), passing strangers run amok (Deliverance, The Hitcher). Your bland-seeming stepfather runs amok (The Stepfather). Fright films are a guilty pleasure because of how radically they simplify human affairs, keeping you plugged into a current of dire anticipation even as they travesty morality, luxuriate in psychological calamity, and reduce character to the rudiments of animal survival. The scary movie appeals to our central nervous system, not to our souls.

Jennifer Kent’s The Babadook, an Australian import and surprise Oscar contender, is the glittering exception, a horror film that abjures cheap thrills and builds its terrors securely atop a base of all-too-familiar human pain. (Spoiler alert: If you haven’t seen the movie, you might want to put this review aside until later.) The setup is deceptively simple. Amelia (Essie Davis), an overworked and sorrow-ridden single mom, lives in a row house in Adelaide with her seven-year-old-son, Sam (Noah Wiseman). The aura of somber distress hovering over them, we learn, derives from the death of Amelia’s husband, killed in a car wreck as he drove her to the delivery room on the day Sam was born. Though years have passed, the hurt remains fresh; the movie opens with Amelia revisiting the accident in a nightmare. As for Sam, he is a dreamy and eccentric boy, given to obsessions and to sudden outbursts—he’s on the spectrum, as we say nowadays—whose social isolation and problems at school only add to Amelia’s burdens. A caregiver at a nursing home by day, solo caregiver after work for a very demanding child, she is taxed beyond measure, and depressed to boot.

Sam is prone to nighttime fears, and bedtime begins with Amelia conducting a ritual check of all closets and under the bed; then she reads aloud to ease her son toward sleep. One night he hands her a strange book—a vintage clothbound volume of mysterious provenance, lurid red in hue, titled Mister Babadook. When she asks where it came from, he shrugs. The tale inside is nightmarish—a sinister fable featuring a black-coated pop-up monster who howls imprecations and demands entry into the house, screaming “LET ME IN!!!”—and Amelia quickly closes it. “It’s just a book,” she says to soothe her upset son. “It can’t hurt you.”

With that shaky bromide, writer-director Kent takes us on what first looks to be a tour of a distressed child’s imagination, a place where—we all know well—a book indeed can hurt you. Sam becomes obsessed by the idea of the Babadook, who with his black hat and bared claws looks like a cross between a chimney sweep and Freddy Krueger. Haunted by this specter, the boy fashions homemade weapons to defend himself and his mother, and his erratic acting-out at school jumps up a notch. The Babadook is real, he insists; it is trying to kill him and his mother too.

Sam’s troubles push the already daunting demands on Amelia to a critical point. Desperate for her son to sleep at night—so that she can too—she gives him Ambien. It works; but now whatever phantom has been afflicting his imagination begins to beset hers. Soon Amelia too seems to be hearing strange knocking sounds in the night—and the sinister book, which she has torn up and thrown away, mysteriously reappears on her doorstep, pieced back together. When she goes to the police to report that someone is stalking her family, they treat her as if she is losing her mind.

Is she? Deftly Kent keeps competing scenarios in play, lodging her film in a zone where supernatural and psychological explanations overlap. Is the Babadook a genuine force of evil? Is it a figment, or expression, of the boy’s distress? Or is soft-voiced Amelia, the tired, fragile mother, losing her grip on sanity? Who or what is knocking on the walls in the dead of night? And who put those bits of glass in her soup? Kent pulls a shrewd reversal, midway through the movie, which both redirects and magnifies our dread. The boy is not the problem; his mother is. The film turns on this point, and from then on careens toward an ever-deepening horror, as Amelia’s capacity for harm—for causing harm—becomes ever clearer, and the son, whom we had thought was going to be the perpetrator of violence, now sets up as the victim.

Gradually we perceive in Amelia underlying emotions too powerful and threatening for her to acknowledge: grief at the loss of her husband, and rage at her son for causing that loss and then surviving instead of his father. Kent sets up a standard kind of movie horror and then bit by bit reveals the true sources of that horror, which are psychological rather than supernatural: not the demonic, but the deranged; not possession, but repression. We think we know what kind of film we’re in for—one in which the brimming imagination of a child is used as a conduit for terror—but we’re wrong. The Babadook begins as The Sixth Sense and turns into Repulsion. At one particularly intense moment I almost fled the theater. The film’s insights are so acute, and its implications so dark, that watching becomes almost unbearable.

Kent and her cameraman, Radek Ladczuk, maximize their effects by keeping distractions minimal. The cast consists of two characters, plus a few tangential add-ons, and the locations are severely limited; 90 percent of what we see takes place within the rooms of the house—its furnishings outdated and austere, and shot in funereal shades of gray. The film’s look, feel, sound, and pacing are perfectly tailored to evoke anxiety, claustrophobia and dread. And this is not done cheaply; there are no jump-cuts, sudden inundations of noise, or other cheesy editing effects. Most thrillers are highly efficient machines for sending your pulse racing. The Babadook finds a far more literary path to our vulnerabilities. Its unusual power derives from its connection to powerful human emotions—grief, anger, and regret—which it sets up and then pushes, bit by bit, to where they imperceptibly merge into madness.

Jennifer Kent is a first-time director, and she has made an almost perfect movie. The Babadook is the canniest film about the uncanny to come along in quite some time. Let’s see if the Academy shivers up an Oscar or two next month.