What to Make of the Children's Crusade
By B. D. McClay
Books
Sexual-abuse Crisis
Pope Francis
Arts 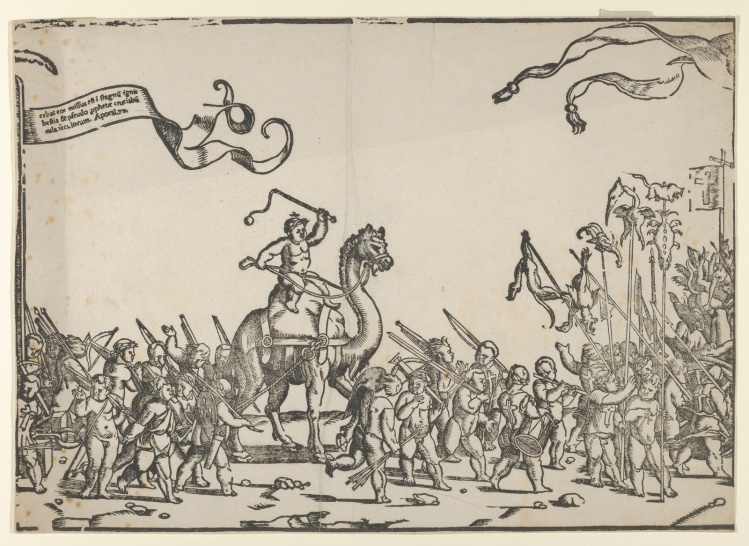 In 1198, Innocent III opened Rome’s first foundling home, the Hospital of the Holy Spirit. Inside the hospital, frescoes tell the story: women in Rome were murdering their children and throwing their bodies into the Tiber; fishermen, distressed at the number of dead infants they were catching in their nets, presented their remains to Innocent III. An angel comes to the horrified pope in a dream, telling him to build a hospital, which he does.

One can believe this story or not—in a paper on the frescoes, Diana Bullen Presciutti points out that the “earliest surviving account of this foundation legend” comes “almost 200 years after the events of the legend were purported to have taken place,” and the Hospital of the Holy Spirit was not exclusively dedicated to foundlings. But if it is true, or even half true, there is perhaps a special poignancy to Innocent III’s role as the pope who also witnessed the Children’s Crusade of 1212, in which children ran away from their parents to an almost-certain disaster. As one of eight tellers of tales in Marcel Schwob’s 1896 novella The Children’s Crusade, recently republished by Wakefield Press, Innocent III pleads with God: “Let there be no new massacre of the Innocents under Innocent…. Long years have taught me that this herd of children cannot succeed. And yet, Lord, is it a miracle?”

To its contemporaries, the Children’s Crusade was bizarre; “a futile expedition,” in the words of one chronicler. To us, it is hardly less so. It comprised two movements of children in 1212, one in Germany, the other in France. (There’s some debate over whether or not the “children” are properly considered such at all). Convinced that they were called to make a pilgrimage to Jerusalem, off they went, asserting the very seas would part if no one gave them passage. Their ultimate fate is uncertain. Later chroniclers believed some of the children, having made it to Marseilles, were tricked into boarding ships “heading for Jerusalem” that actually took them away to be sold into slavery. (This is the story Schwob follows.)

Perhaps because it is such a strange story—one that feels like a myth—the Children’s Crusade automatically presents itself as a lens through which to understand other awful moments involving children: sexual abuse, shootings in schools, children at the border. A myth can be a clarifying simplification, and children, symbolically, are simple; so children setting out, already doomed, in the service of an ambiguous cause, betrayed and manipulated by the adults around them, can easily stand in for other suffering children, revealing something about their circumstances and lending them historical weight. Schwob’s book even makes a cameo in Valeria Luiselli’s new novel Lost Children Archive, a book about the deportation of migrant children.

If it is a story about innocence and power, it is also not a story in which innocence is conflated with powerlessness.
sharetweet

And yet after reading The Children’s Crusade, reading more about the events in question, and then returning to it, I find that something about the book and its story resist being used in this fashion. The history makes what really happened to the children harder to know, and instead of deepening my understanding of the present, using the Children’s Crusade simultaneously distances me from what’s happening while obscuring the sadness of what happened to these long-dead children. What remains, instead, is Schwob’s bleak meditation on innocence, one in which the children are innocent to the point of seeming almost inhuman. Their innocence also provokes something suspicious in the adults around them.

“There are cruel men who gouge the eyes of children…to put them on display and evoke pity,” the first teller of the novella’s tales, a goliard (or wandering cleric) warns us. “And this is why I was afraid when I saw all those children.” That Schwob himself will proceed to do this to these children deepens the warning, rather than undermining it. When adults encounter children, the book suggests, one urge they experience is to maim them; it is this desire to harm that underlies an adult obsession with children’s purity.

The eight tales that make up The Children’s Crusade read like testimony: one even begins, with some urgency, “If you want to understand what I am about to tell you...” But if they are testimony, even only rhetorically, it is unclear to whom it is directed. What has happened with these children requires some sort of explanation, but who is in a position to do it, and who is owed such an explanation in the first place—the children to the adults, the adults to each other—remains ambiguous.

None of these tales depict the dramatic moments one might expect: no setting-out, no declaration that the sea will part, no moment of realized betrayal. Instead, some of the tales are from people who encounter the children on the road; two are from the point of view of the children themselves; and two, finally, are from Popes Innocent III and one of his successors, Gregory IX. Attitudes toward the children vary. The goliard and a leper, who meet them during their travels, are moved. Pope Innocent III wonders if the children represent a test that he’s failed; Gregory IX mourns them. A qalandar (a kind of Muslim holy man) who happens upon them after they’ve been sold into slavery rejoices in the opportunity they present for conversion.

For François Longuejoue, a cleric in Marseilles, however, these “throngs of children” are a problem. (Amusingly, Longuejoue’s testimony is presented as written testimony, as if turning up to speak on the subject was a waste of his time.) To him, the children “know not what they do,” but this makes them dangerous; they are a “foreign turbulence,” a “northern horde,” and their “madness of a children’s army” is not condoned by the church, thus liberating the town of Marseilles from any obligation to them. It has been a rough winter, after all; they cannot support these hungry masses. So off the children go in the boats that are supposed to take them to Jerusalem; as the reader is painfully aware, nothing of the sort will happen.

With the exception of Longuejoue, the adults are moved and troubled by the children’s purity and make note of it. To these adults, the children are “white” as Christ is “white”: without stain. They are pious, unafraid of other people. The children are so unmarked as individuals to the adult observers that the goliard tells us he considered them “nameless.”

Part of the historical argument that the “children” were not children at all, but rather adults, has to do with a dispute over the term used to designate the children in contemporaneous accounts: puer. That term, it is argued, does not connote a child so much as a person who is not fully considered an adult—an unmarried and unmarriageable laborer, for instance, or a shepherd. In his book The Children’s Crusade: Medieval History, Modern Mythistory, Gary Dickson disputes this understanding, pointing out that puer refers reliably to youthful people in other contexts.

Yet also interesting, if we step back from the technical argument for a moment, is the assertion that a person can be not a child—which is to say, not toddling, diapered and rosy-cheeked, but rather off to the sea—yet also not an adult. If the argument is that the children are not children because they are shepherds, then shepherds, whatever their age, simply aren’t children. Not everyone gets to be a child.

Would it matter if the “children” of this Children’s Crusade weren’t children? For the book, it matters in a particular sense: imagining a group of adults traipsing through Europe does not provoke the same sense of tragedy, or of innocence’s power and powerlessness, both its moving and inert qualities. They could not have sustained this book. Yet a group of adults that had, similarly, been betrayed and sold into slavery would be, in the way that mattered, no less innocent.

When Pope Francis speaks of the victims of abuse, he sometimes calls them “little ones.” “We showed no care for the little ones,” he said in August of last year. At the recent summit on child abuse, he prayed that those gathered “listen to the cry of the little ones who ask for justice.”

This language has a real emotional weight. But it also flattens children—a category that here also includes teenagers, not precisely “little”—into an abstraction, eliding not only the abuse of adults but even the way abuse looks when it involves actual children. Real children are many things; they have an insistent bodily presence and need; they can be loving, cruel, courageous, deceitful. They get tired and angry. One of the ugly aspects of predation is that it looks at a child with its own inner life and chooses to regard it instead as a blank mass on which a stronger will can be imposed.

Part of what makes the Children’s Crusade such a compelling story is that it is not a story of children being sent out to die by adults, or being manipulated by adults, but rather an assertion against various authorities—parental, ecclesiastical—that there was something important happening which these adults did not have the right to control. If it is a story about innocence and power, it is also not a story in which innocence is conflated with powerlessness. That the children lose does not make them passive; that they are not passive does not mean they are not innocent. Part of the struggle is over what their attempt to go to Jerusalem means; if it is insanity, or disobedience, or something else.

One interesting decision Schwob makes in The Children’s Crusade is to have the children say, within their own tales, that they are guided by voices that all of them seem to be able to hear, even after they are deceived in Marseilles. Though the children seem nameless to the adults around them, in their own stories, they have names, relationships, and faith. They are still abstractions—The Children’s Crusade is that sort of a book. But the choice to side, in some sense, with the children, to grant validity to their doomed quest, lends this strange and sad novella a hopeful quality. Whatever happened to these children, what it all meant, ultimately belongs not to the surrounding adults, but to them.