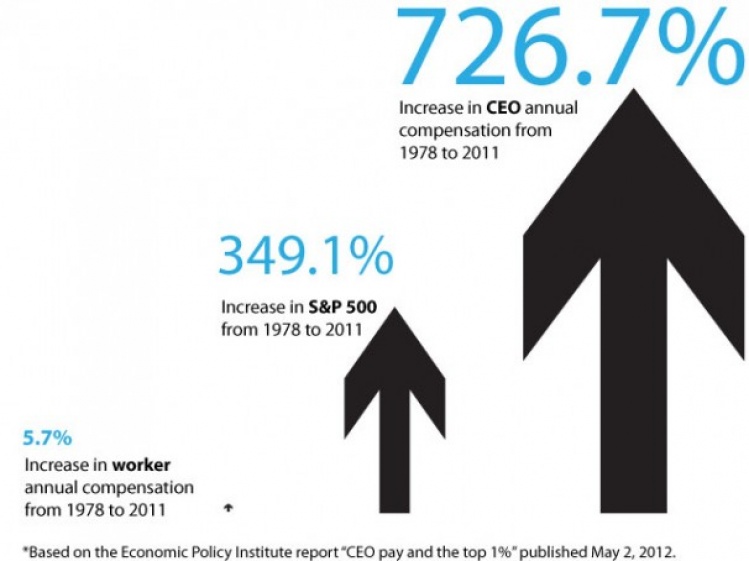 A few months ago, there was some good discussion on the blog about the persistently large gap in income inequality. And though the Occupy movement no longer garners headlines, the problem of income inequality remains a core moral issue for many Americans. It is widely thought that Bill de Blasio's focus on the topic has aided his rise in the New York City mayoral race. Andrew Sullivan's influential blog continues its coverage of the data, which shows that just since 2009, top 1% income has grown by 31.4% and everyone else's has been basically flat. Our own E. J. Dionne continues to cover the politics of inequality, and the U.S.C.C.B. has not shied away from it in its advocacy.

Last time we talked about it on this blog, we focused on ratios of CEO-to-worker pay in a given year, and David Cloutier followed up with a longer analysis at Catholic Moral Theology. But the problem is about more than a given year -- it's about the long-term trend from the late 1970's to the present. Timothy Noah has called this period The Great Divergence, in a multifaceted analysis of the possible causes of the growing gap. To my mind, the long-term story offers a compelling moral problem for our time, and one without an easy solution.

A quick way to capture the "great divergence" is this summary of the Economic Policy Institute's report from last year, about which Jena McGregor at the Washington Post wrote:

Average CEO compensation, according to EPI’s calculations, rose 726.7 percent between the years of 1978 and 2011 — more than double the percentage increase in the Standard & Poor’s 500-stock index. Meanwhile, pay for the average private-sector nonsupervisory worker rose a startlingly meager 5.7 percent. ...

My guess is that it’s this inequality that really erodes worker satisfaction and guts employee morale far more than the discrepancy between the top and bottom in any one year’s pay.

I think she's right. Everyone expects annual ratios of 20-to-1 or even 200-to-1 in our form of capitalism. But the fact that purchasing power has not trickled down in the long run -- over my whole lifetime -- is what drains energy and optimism.

One feature of Pope Francis's pontificate has been a renewed emphasis on moral issues that had been thought of as peripheral for many Catholics. He has expanded the core of what counts as a central moral issue. But it's worth remembering that his predecessor had strong words on growing inequality, such as those quoted in the U.S.C.C.B.'s letter from Labor Day:

The dignity of the individual and the demands of justice require, particularly today, that economic choices do not cause disparities in wealth to increase in an excessive and morally unacceptable manner, and that we continue to prioritize the goal of access to steady employment for everyone. . . . Through the systemic increase of social inequality . . . not only does social cohesion suffer, thereby placing democracy at risk, but so too does the economy, through the progressive erosion of "social capital" . . . indispensable for any form of civil coexistence. (Caritas in Veritate no. 32)

Chart of the day: Troop levels