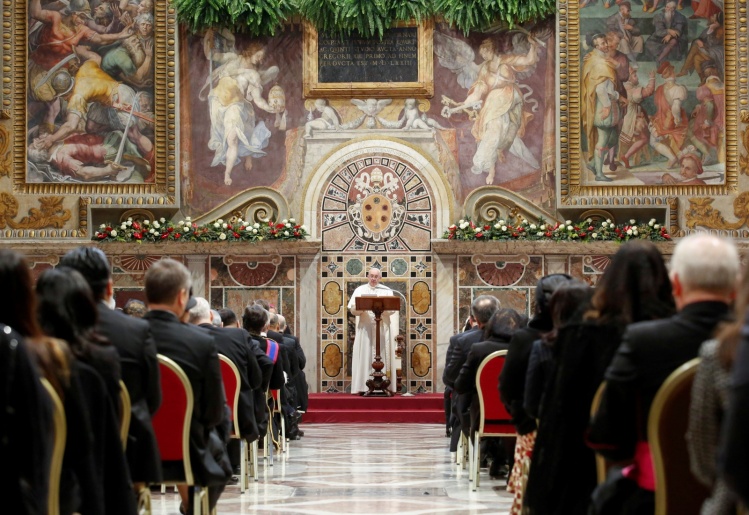 The pope’s annual address to the diplomatic corps is just one of the things that highlights the anachronistic tensions in how the Vatican operates. Held in the Sala Regia, the occasion can hark back to the monarchical era of the papacy—the fresco of the battle of Lepanto of 1571, between the Holy League and the Ottoman Empire, is a prominently visible backdrop—but the contents of the address are plainly of the geopolitical moment. Pope Francis’s 2020 speech came in the immediate aftermath of the Trump administration’s assassination of Iranian General Qassem Soleimani in Iraq and Iran’s retaliatory missile strike on U.S. bases in the same country. In his address, he renewed his appeal for “all the interested parties to avoid an escalation of the conflict and ‘keep alive the flame of dialogue and self-restraint,’ in full respect of international law.” The remarks are in keeping with a political and theological shift long underway; the church and Islam have come a great distance from the battle of Lepanto to the Document on Human Fraternity signed by Francis and the Grand Imam of al-Azhar in Abu Dhabi exactly one year ago, on February 4, 2019.

The pope didn’t limit his focus to the Middle East, but offered a tour d’horizon of the world based on the map of his trips in 2019: from Panama in January to Thailand and Japan in November. Francis lamented the situation of conflict in many regions of the globe: “Sadly, the new year does not seem to be marked by encouraging signs, as much as by heightened tensions and acts of violence.” Another gesture to these times was his special mention of Australia—a country he did not visit—and its catastrophic wildfires. This of course aligns with Francis’s emphasis on environmental issues, a focus of the Synod for the Amazon last October, when he said that “the urgency of this ecological conversion seems not to have been grasped by international politics, where the response to the problems raised by global issues such as climate change remains very weak and a source of grave concern.” Francis also addressed Latin America in his 2020 speech, highlighting the crisis in Venezuela in particular. It must be said that during the papacy of this first Latin American pope, economic and political conditions in the region from which he hails have deteriorated considerably.

If today the papacy remains one of the few proponents of multilateralism and of the role of international organizations, it is thanks in part to Vatican I and how it helped lead to Vatican II.
sharetweet

The speech was also an opportunity for Francis to describe the global role of the Vatican and the papacy in broader terms: “Peace and integral human development are in fact the principal aim of the Holy See in its involvement in the field of diplomacy.” On nuclear weapons, this pope continues to be more forthright than his predecessors. “A world ‘without nuclear weapons is possible and necessary,’” he said, repeating his previous moral condemnation not only of their use but also of mere possession—a position that has been met with strange indifference in the United States, where there was strident reaction to Amoris laetitia on divorced and remarried Catholics and to the revision on capital punishment in the text of the Catechism.

Francis also commented on the dangers and discrimination women suffer globally, a topic on which he has generally echoed his predecessors rather than speaking with his own voice. “It is my hope that the invaluable role of women in society may be increasingly acknowledged worldwide and that all forms of injustice, discrimination, and violence against women come to an end,” he said. We’ll see if the Church follows suit, though there have been some recent signs of movement, judging from what’s getting published lately in official Curia-vetted news outlets. Francis also spoke of the sex-abuse crisis, which in the last two years has become a global Catholic problem, and restated a promise to cooperate with civil justice and law enforcement: “The Holy See has renewed its commitment to bring to light abuses already committed and to ensure the protection of minors through a wide range of norms for dealing with such cases in accordance with canon law and in cooperation with civil authorities on the local and international level.”

Francis also cited a number of notable anniversaries particularly important to understanding the papal multilateralism of the contemporary era: the anniversary of the United Nations (1945), of the Holy See as an observer to the Council of Europe and the establishment of diplomatic relations with the then European Communities (1970), of the Helsinki Final Act that concluded the Conference on Security and Co-operation in Europe (1975), and of the fall of the Berlin Wall (November 1989). He did not mention the 150th anniversary of the First Vatican Council, which with its sanctioning of papal infallibility complicates its theological and political memorializing. But he could have: the internationalization of the “Roman question,” adopted initially as a strategic response to the loss of the Papal States, culminating with the loss of Rome in September 1870, opened a new phase in the history of the papacy. Beginning especially with Leo XIII, the papacy became an agent of mediation in international situations and for humanitarian causes. If today the papacy remains one of the few proponents of multilateralism and of the role of international organizations, it is thanks in part to Vatican I and how it helped lead to Vatican II. And now, in 2020, as Francis’s speech made clear, Catholicism remains committed to international cooperation and dialogue. The Holy See seems to be one of the few global actors that remembers the dark lessons of the last century’s nationalist and authoritarian catastrophes.