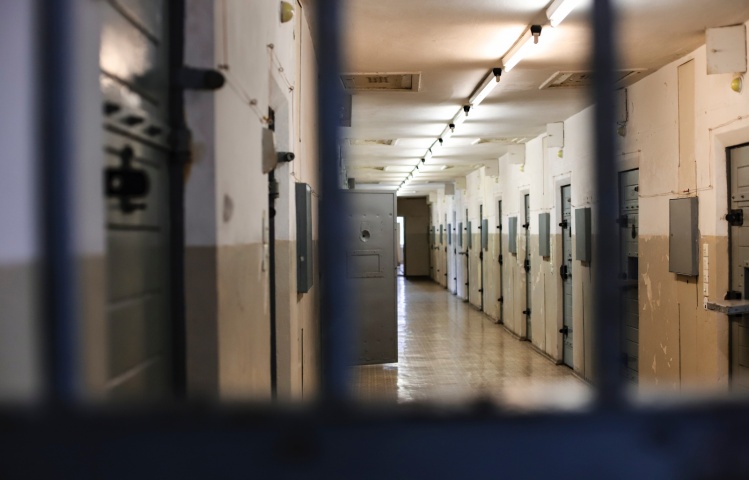 Photo by Matthew Ansley on Unsplash

All names have been changed.

“You took all of this on, Lord.” This was my prayer after I visited “Peter” in the mental-health unit in a prison in Philadelphia. The twenty-five-year-old man had murdered a neighbor in a fit of rage for unclear reasons. Since his arrest, he had been confined in prison, awaiting assessment to determine if he would stand trial. I was already at the prison visiting other inmates when the supervisor of the Catholic chaplaincy called to ask me to visit Peter.

I walked down the bare stone corridor to the mental-health unit. When I asked a nurse if I could speak with Peter, she and the other nurses gave me a wary glance. I knew this was a risky encounter; Peter’s mother Tracy had told me he was likely psychotic, and had been placed under suicide watch. I asked the nurse again, adding, “His mother wishes that I see him.”

She brought me to the Central Control Office, sealed with what I imagine is bulletproof glass, where a few uniformed officers run the lockdown units from a safe distance. The nurse stood quietly until the head officer looked at her. “The chaplain would like to visit Peter Grambling,” she said. He too gave a look that said to me that I must be crazy. “I’ll just say hello,” I uttered like a fool, indicating with a wave of my hand how I planned to do so. He shrugged and got up to lead me to where Peter was held in solitary confinement.

I had been to these cells a few times before. First, a thick gray door with a slim rectangular slit of a window; past it, mentally ill prisoners alone in their cells; nothing in each room but a narrow cot to sleep on and a stiff padded blanket to cover oneself with (a blanket that couldn’t be used for self-harm), a toilet, and a sink. As we approached his cell, I spotted Peter’s name on the door and the warning signs written in large capital letters: “ASSAULT RISK. SUICIDE RISK.” Yes, Peter must be gone, I thought—a murderer, and probably insane. On some level I hoped he was insane.

I remembered how the newspaper article had described his crime. It said that Peter stormed out of his family’s house and used a garden tool to beat his neighbor to death. The victim was a forty-three-year-old man who was the caregiver for his mother.

As the world fights in fear of each other, and wonders where you are, I give you thanks that you have brought me here.
sharetweet

The thick door was swung open. On the cot in the white-walled room sat a young man, head shaven, solidly built, naked from the waist up. His lower body was draped with the quilted blanket.

Dead blank eyes—coming-out-of-sleep eyes?—stared across the room at me. The officer held the door open and waited for me to move. I was dressed in my black clerical shirt and trousers, collar unbuttoned, in case a roman collar would upset Peter. I searched his eyes for anything at all, and saw a growing hostility. All of my handbook ideas of pastoral care flew out the window.

“Peter,” I said in a soft voice, “Your mother wanted me to see you.” I tried a slight smile. I could sense the officer by my side wishing I would see the futility—even the danger—and let it be.

“I’m Father Paul.” Again I could hear my voice, smooth and tender, as though I were reaching out to a skittish animal. I won’t hurt you. You must be totally lost and devastated in some awful place I could never imagine. No wonder you might want to kill yourself. I hoped that something familiar might register through the chaos. I continued, “I am a priest from Villanova. I’m the Catholic chaplain here.”

I remembered how his mother had told me in a muted and weary voice on the phone, “Peter was my baby.” Stall for time. “Your mother and your brothers are concerned about you. Everyone is.” The glare never eased.

Desperate to find a connection—to find his soul, if it were still alive—I asked, “May I say a prayer?” I reached my hand out toward him.

The hard eyes changed ever so slightly—into pain?—and he gave an almost imperceptible nod. It was the first indication that Peter was not totally unreachable. Stunned, I began an awkward tumble of words that might move God or Peter if either were present.

“Oh, God, many people are concerned about Peter—his mother, his brothers, his friends. Be with him Jesus, so he doesn’t feel so alone.” I kept my eyes fixed on his. My hand hung open between us.

Then there arose from the young man’s catatonic face the faintest glimmer of recognition. The barest nod of the head. His lips formed a soundless thank you. I felt as though I was at Lazarus’s tomb as he emerged.

The officer moved to escort me out. “I will try to see you again in a few days,” I said to Peter as the door was closed and bolted.

As the two of us walked side by side back to Central Control, the officer stopped for a moment. “He has been here over two weeks,” he said. “That is the first time I have seen him show the slightest sign of life.” Overwhelmed, all I could mumble was my own “thank you.”

That night, I prayed before the crucifix. “Oh, Lord, thank you for being within Peter. For being in his mother’s pain and love, for taking on the crucifixion of insanity, murder, total estrangement—the kind of horror that would make death seem a blessing.” I said through tears,

“As the world fights in fear of each other, and wonders where you are, I give you thanks that you have brought me here—to gaze at you across the padded cell, to realize your unbounded love for all of us.”

Paul F. Morrissey, OSA has been priest a for 51 years and volunteers as a chaplain in the Philadelphia Prison System. He is the author of Let Someone Hold You: The Journey of a Hospice Priest (Crossroad, 1994), which won the Catholic Press Award and the Christopher Award, and editor of “Voices From Prison and the Edge,” a newsletter for those affected by crime. His pamphlet about prayer is available at www.liguori.org. His most recent work is a novel, The Black Wall of Silence.