Some Hope on Columbus Day

Recalling a Lynching, and the Response
By Paul Moses
Race
Domestic Affairs
Immigration 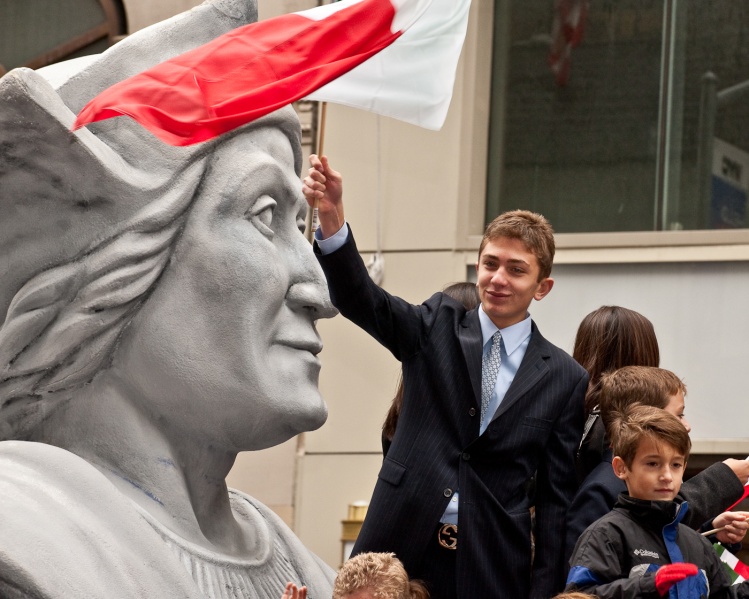 Rhetoric condemning Christopher Columbus seems to have become as constant a part of his annual holiday as department store sales, but we are reminded this year that the celebration arose out of an immigrant group’s heroic struggle to overcome deep and sometimes deadly bias.

In his cover article for The New York Times Sunday opinion section, Brent Staples recounts how President Benjamin Harrison ordered a one-time national holiday in the explorer’s honor in 1892, mostly to quell the Italian government’s outrage over the unpunished lynching of eleven Italians in New Orleans the year before.

Staples won this year’s Pulitzer Prize for Editorial Writing for a collection of columns in the Times, mostly on the legacy of slavery. One of the articles took southern newspapers to task for having encouraged and applauded lynchings, and praised the Montgomery Advertiser for a front-page editorial apology.

Now, he has taken his own newspaper to task for its coverage of the 1891 murders of the eleven Italians in New Orleans—a lynching that stemmed from public outrage over the acquittals a jury issued in the first trial in the slaying of the city’s police chief. “If the verdict had been acquiesced in by the people of New-Orleans, their acquiescence would have shown that there is not power and virtue in the community,” the Times editorialized on March 17, 1891.

“These sneaking and cowardly Sicilians,” the editors wrote, “the descendants of bandits and assassins, who have transported to this country the lawless passions, the cutthroat practices … are to us a pest without mitigations. Our own rattlesnakes are as good citizens as they.”

As powerful as Staples’s writing is, it is an individual’s response that falls short of the institutional apology that many Italian American organizations, led by the Order of the Sons and Daughters of Italy in America, had sought in a May 1 letter to the Times. Michael Santo, a New York attorney who wrote the letter on behalf of the order, said in a telephone interview that the Staples op-ed, which he praised, “has nothing to do with the request for an apology.”

Prejudice is defeated not so much by institutions as by individuals—lots of them—who overcome the barriers.
sharetweet

Santo’s letter to the Times had followed a formal apology for the lynching that New Orleans Mayor LaToya Cantrell issued on behalf of her city on April 12. Santo told me it was courageous of her because the 1891 lynching continues to be a sensitive topic in New Orleans. Descendants of “both sides of the equation”—victims and perpetrators—live in the city, she said.

Staples’s work has a depth of historical research that’s uncommon in journalism, but he may miss on one point:

The Times was not owned by the family that controls it today when it dismissed Ida B. Wells as a “slanderous and nasty-minded mulattress” for rightly describing rape allegations as “a thread bare lie” that Southerners used against black men who had consensual sexual relationships with white women. Nevertheless, as a Times editorialist of nearly 30 years standing—and a student of the institution’s history—I am outraged and appalled by the nakedly racist treatment my 19th century predecessors displayed in writing about African-Americans and Italian immigrants.

The Times’s threatening commentary against Italian immigrants didn’t end with Adolph Ochs’s purchase of the paper in 1896, with his goal of more serious coverage reflected in the motto, “All the News That’s Fit to Print.” For example, an 1899 article on a police shooting in Harlem warned:

Several outrages by Italians have occurred within a short time in that part of the city, and the feeling of the citizens is bitter. The police say that some day, if the Italians do not curb their powers for evil, there will be a large-sized lynching bee in Harlem, and the affairs that claimed Italian victims in the South will be tame in comparison.

With the rise of “Black Hand” bombings and extortion in 1904, a Times editorial came close to endorsing vigilantism:

We have too many bad Italians already, and since the good Italians so generally refuse to give any information to the police which might assist them in their efforts to run down criminals of their race, we may be unable in any protective measures we adopt to distinguish in every case the good Italian immigrant from the bad Italian immigrant. That will make no difference—protect ourselves we must.

This was strong stuff, even by the era’s standards, and other newspapers stepped in to defend Italian immigrants. The Times’s discomfort with Italian migration continued, if more subtly, through the passage of 1924 legislation designed to stop the flow from Italy and eastern Europe. “The Times is frankly and pretty consistently conservative,” Times editorialist Elmer Holmes Davis wrote in a self-congratulatory institutional history that the paper published in 1921.

But ultimately, prejudice is defeated not so much by institutions as by individuals—lots of them—who overcome the barriers. That breaks down institutional resistance. That is what both Mayor LaToya Cantrell and Brent Staples are doing.

Both are African Americans with a deep understanding of how a history of racism in America permeates the present.  They have applied that insight to the racist bias against Italian newcomers to America a century and a quarter ago. In doing so, they bring some hope on Columbus Day, this day to celebrate the immigrant struggle. Those of us who celebrate the day—this writer is one—must do likewise.