How Far Have We Gone? 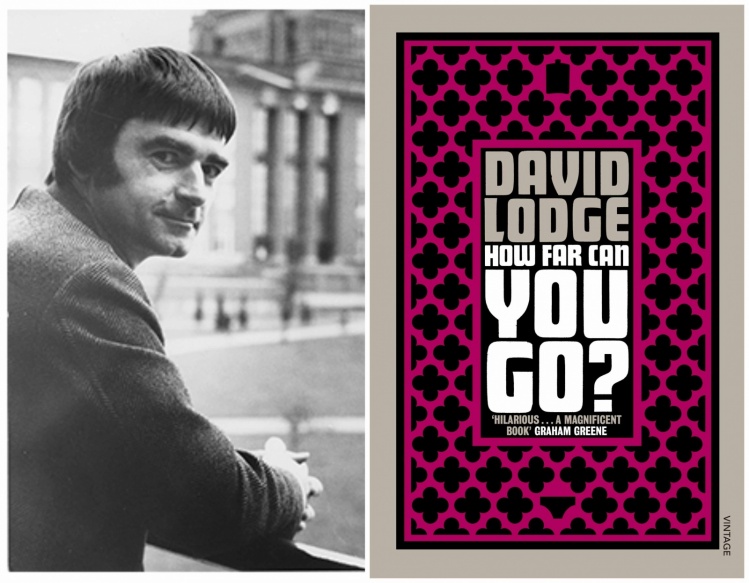 Polling over the last fifty years on Catholics and Humanae vitae sums up in dreary numbers the fateful consequences of Pope Paul VI’s decision to maintain the church’s ban on contraception. But who’s to say that this is the reason for the church’s current disarray? If we turn to another, more humorous account, we will find that the decision did not necessarily make a generation less religious, only more adult. We’re left with a decades-long quandary: Can adults find religion in rule-based Catholicism?

David Lodge’s 1980 novel How Far Can You Go? opens on a Thursday in 1952 with a Dickensian riff on the London weather, “an atmospheric depression…with coal smoke from a million chimneys…. A cold drizzle is falling.” We shiver and quickly enter the cold, dimly lit Church of Our Lady and St. Jude where nine students, wrapped in coats and mufflers, attend a weekday Mass of the New Testament Study Circle. The novel’s title will alert some readers to its themes, jokes, and anxieties (sadly obscured in the U. S. edition by the title Souls and Bodies). The opening pages offer a brief flashback to Lodge’s real-life Salesian school in a London suburb, where “the bolder spirits” among the boys in the religious instruction class press the question: “Father, how far can you go with a girl?” In another Lodge novel, The British Museum Is Falling Down, the question becomes, how far can you go when married?

The students worshipping at Our Lady/Saint Jude have risen early and, still fasting, commute from their “bed-sitters” to a church near the university. Except for one convert, they are cradle Catholics, perhaps more observant than the usual. They have been educated in Catholic schools and their families are working- and middle-class with a dusting of Irish ancestry. The dimness and chill of the early hour evokes the rationing still plaguing post-war England in the early fifties. Lodge captures their inner thoughts focused on the liturgy and, at least among the young men, on fleeting sexual fantasies, which they firmly believe are, if not sin, at least occasions of sin. One of them so tempted refrains from communion while offering a more intellectually acceptable reason: uncertainty about transubstantiation.

Lodge has imbued his fictive characters with his own experience and that of his peers while doing the work of a novelist—devising the framework to tell a generational story of Catholics, sex, and the church from the fifties to the seventies.
sharetweet

But all is not gloom and doom. They are fortunate. Their very presence at the university salutes the reforms that opened higher education to all that passed their school exams, promising a prosperous economic future. Lodge himself was such a fortunate English boy, as he claims and substantiates in his memoir, Quite a Good Time to Be Born: 1935-1975, and embroiders in volume two, Writer’s Luck, 1976-1991. Both volumes give evidence of moments in his novel that touch the borders of autobiography—including questions about Catholics, sex, contraception, and belief that wended their way through the sexual revolution of the fifties, sixties, and seventies.

Having deftly introduced his characters (Polly, Angela, Dennis, Adrian, Miles, Michael, Edward, Ruth, and Violet) and given something of their progress in love and life, Lodge pauses mid-novel, jumping ahead to July 25, 1968, the day Humanae vitae was issued. Breaching authorial anonymity, he offers an explanation of the document and a synopsis of how the issue affects these nine, as well as the spouses some have acquired in the meantime.

“The omniscience of novelists has its limits, and we shall not attempt to trace here the process of cogitation, debate, intrigue, fear, anxious prayer and unconscious motivation which finally produced that document. It is as difficult to enter into the mind of a Pope as it must be for a Pope to enter into the mind of, say a young mother of three, in a double bed, who feels her husband’s caressing touch and is divided between the desire to turn to him and the fear of an unwanted pregnancy…”

Further thinking on the unreason in the pope’s ban on contraception is set forth in the language of a theological journal with an admonition to the reader: “Patience, the story will resume shortly.” The chapter titled “How They Lost the Fear of Hell” continues the narrative.

Between 1952 and 1968, sixteen years had already passed—even in England. The nine students have moved on, the men to careers, the women to homemaking and children. Five are now married, two to each other; one, Polly, has had multiple affairs but finally weds a divorced man. There have been the usual marital adjustments, struggles, and reconciliations, and some genuinely happy unions. They have tried the rhythm-and-basal-temperature method with the accompanying anxieties and a few more children than planned. Ruth has become a member of Precious Blood, a teaching order of sisters. In the course of an American sabbatical she discovers the charismatic movement, brings it back to England, and introduces it to her friends. Miles, a gay man (and convert), still closeted, is a don at Cambridge. There is a businessman, a doctor, a special education teacher, a university lecturer: the university reforms have paid off.

Each has a tenuous relationship with the church of their childhood, now seen as obsessed with obedience. At least one man has given up trying to reconcile the church’s “over-rationalized” doctrinal explanations with his own reasoning, yet continues to attend Mass with wife and children. One has strayed from Catholic practice without actually having given up Catholic belief. All are devoted parents, if overwhelmed with the fear of having too many. Angela and Michael mourn the accidental death of a daughter and work faithfully to raise a child with Down syndrome—a recurring concern for Edward, the physician, who has become alarmed at the possible confluence of the syndrome with use of the rhythm method. His conscience finally presses him to forego advising his patients to use the method. Violet, the most religiously volatile, has over the years fervently tried out several other religions.

Except for the convert, who ultimately returns to Anglican practice (the liturgy is better), the nine-plus join together in home liturgies, sign petitions to the cardinal, and send articles and letters to the Catholic press. They have formed “Catholics for an Open Church,” a lay association with an informal chaplain (he who presided at that 1952 liturgy). This freelance parish grows out of their friendships and sustains an attachment to the church. The association’s improvised Easter liturgy that brings the novel to a close retains the form and language of the Catholic liturgy (albeit in English and with dance). The Eucharist, however any may understand it, remains the center of this Paschal Feast.

Lodge has imbued his fictive characters with his own experience and that of his peers while doing the work of a novelist—devising the framework to tell a generational story of Catholics, sex, and the church from the fifties to the seventies. With due allowance for cultural differences, these stories of English Catholics parallel those of Americans. How Far Can You Go? may not end with the conflict resolved, but it is more humorous and compassionate than fifty years of polling. A final coda, “Catholics for an Open Church,” finds the nine-plus have gone various ways: promoting marriage encounter, studying the Shroud of Turin, taking up jogging. The daughter of one family meets up with the son of another (in fact, the woman married to a divorced man—both now divorced from each other) and “to the astonishment of both families,” she converts him to Catholicism; theirs is a chaste courtship. Lodge finally signs off on his own character: “I teach English literature at a redbrick university and write novels in my spare time, slowly, and hustled by history.”

But wait! A final, final sentence: Lodge tells us that by the time he is “typing up” How Far Can You Go?, Paul VI has died, John Paul I has died, and John Paul II has been elected. With him there is a sense “that change has gone far enough.” It will, says the author, “be interesting to watch.”

As long as papal fiat remained supreme, there seemed to be no overcoming the gap between the lingering experience of rule-based Catholicism and the demands of an adult faith.
sharetweet

But now, dear reader, some decades later we are still wondering: How far have we gone?

The novel, published in 1980, might seem like a period piece. Its signs and symptoms of change—sex, marriage, and birth control—are in the foreground while Catholicism’s weightier changes flowing from Vatican II sit lightly sketched in the background. Yet the liturgy, albeit in diverse forms, remains at the heart of the nine’s gatherings, while a deep and loyal friendship continues to knit them together even in difficult times. They have abandoned the rule-based Catholicism of their childhoods; somewhat more tentatively, so have their priest friends. Some have drifted into rule-based secularism and become avid consumers. Others are carried along to Sunday Mass by habit and family solidarity. The next generation is moving on…perhaps spiritual, but mostly not religious.

Though the nine-plus have rejected their childhood Catholicism, they have found nothing sufficiently adult to replace it. John Paul II thought “change [had] gone far enough.” In effect the nine-plus, along with others of their generation, did not leave the church so much as the church left them—in the lurch. As long as papal fiat remained supreme, there seemed to be no overcoming the gap between the lingering experience of rule-based Catholicism and the demands of an adult faith.

But to echo Lodge, dear reader, John Paul II has died, and his successor Benedict has retired. Now we have Francis—for whom change may not have gone far enough. We shall see.