How Christmas Was Trumpified 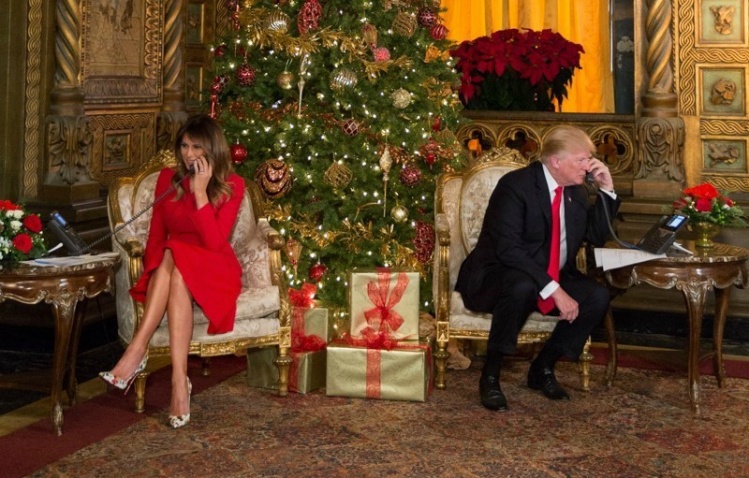 I often wish people a “happy Christmas” during this season rather than a “merry” one. “Happy” just sounds right to me—perhaps it suggests a deeper satisfaction, making it better suited than “merry” to celebrating Jesus’ Incarnation.

This year, I’m using “happy” more often because Donald Trump, that master of the intersection of pop culture with marketing and politics, has branded the phrase “merry Christmas.” This innkeeper seems bent on turning Christmas into one of those hotels emblazoned with his name even though someone else built it.

I’m not the only one struggling with how to greet people during the Christmas season. As Michelle Boorstein and Sarah Pulliam Bailey reported for The Washington Post, Trump’s battle against the “war on Christmas” is on the minds of many people as they search for the right seasonal greeting.

“And whether that means they feel more liberated, more hesitant, or merely in a knot of mental machinations at the moment before a potential greeting exchange, they often all share one common thing, somewhere in their brain: Donald J. Trump,” they wrote.

The notion of a “war on Christmas” has been around since about 2004, pushed early on by Bill O’Reilly on Fox News and by Bill Donohue of the Catholic League for Religious and Civil Rights. It was highlighted in the 2005 book The War on Christmas: How the Liberal Plot to Ban the Sacred Christian Holiday Is Worse Than You Thought. The author is John Gibson, then a host on Fox News.

There are indeed secularist organizations that would wrap up the gift of Christmas in a box and return it if they could—the Freedom from Religion Foundation favors re-naming the federal holiday “Family Day”—but the chatter over the so-called war never rose to the decibel level that it has with Trump as the nation’s chief executive. It’s doing more harm than good to the religious celebration of Christmas.

The great danger to a meaningful Christian celebration of Christmas is that Christians will buy into the feast’s commercialization.
sharetweet

A poll that the Pew Research Center released this month found that millennials are more likely than not to celebrate Christmas as a cultural holiday rather than as a religious one—44 percent to 32 percent. There’s legitimate cause for concern for those of us who value religion and its role in American life. But linking the celebration of Christmas to the conservative political agenda can only accelerate the movement of young adults away from organized religion. As I’ve observed in my college classrooms, millennials are quick to detect hypocrisy, and the Trump “merry Christmas” campaign clearly qualifies by using a season of peace and good will to stir resentment and divisions that solidify his political base.

The Pew poll found a sharp partisan divide when it asked respondents if they would prefer that shop workers greet them with a “merry Christmas”; 54 percent of Republicans wanted the Christmas welcome, while just 19 percent of Democrats did. Among Democrats, 61 percent said the greeting didn’t matter. But despite Trump’s election-year hype about the “war on Christmas,” the trend since 2005 is for fewer Americans to prefer that stores use “merry Christmas,” Pew found; the proportion dropped from 43 percent in 2005 to under a third this year.  Even people who attend religious services at least weekly say that it either doesn’t matter or that they prefer a less-religious term like “happy holidays”—55 percent to the 44 percent who prefer “merry Christmas,” according to the poll. By linking “merry Christmas” so closely to his own political agenda, Trump is probably spoiling that phrase even for some people who are steadfast observers.

Given the trends, it’s all the more astounding that Trump would be able to cast his shadow over the “merry Christmas” greeting. Trump may not be getting any results in terms of the poll data—which suggest, if anything, that he’s turning people off—but he has people thinking about him, pro or con, even as they extend greetings.

If there is one talent Trump has demonstrated, it’s how to craft and spread a branding message. He keeps it simple and focused, repeats it, and disperses it relentlessly through mass media, often for free. He promoted his business interests by turning himself into an emblem of the pleasure principle, a model for crass materialism, ego and sexual indulgence. In the 1980s, his vehicles were newspaper gossip columns, supermarket weeklies and tabloid TV.  Then he propelled himself with the aid of reality TV, social media and cable TV news programming. Professional wrestling, professional football, beauty pageants: Trump also used these arenas to spread his brand through popular culture.

Christmas is another stop on that journey. The great danger to a meaningful Christian celebration of Christmas is that Christians will buy into the feast’s commercialization. But Trump banked his business on developing a persona of consumerist glamour. Trump was forthcoming about this in his 1990 interview with Playboy magazine:

Q: Then what does all this—the yacht, the bronze tower, the casinos—really mean to you?

A: Props for the show.

Q: And what is the show?

A: The show is "Trump" and it has sold out performances everywhere. I've had fun doing it and will continue to have fun, and I think most people enjoy it.

While posing as protector of Christmas, he has launched what might be called a war on the traditional social concerns of Christmas:  the poor, exemplified by the shepherds who first saw the infant; refugees, like the Holy Family; and all those excluded from the inn. He has cut health-insurance subsides for the poor; eliminated funding for an international hunger-relief program; and signed into law a tax cut that could lead to further reductions in services for the poor.

There was an exchange on wealth and poverty in the Playboy interview:

Q: With so much poverty on the city streets, isn't it embarrassing for you to flaunt your wealth?

A: There has always been a display of wealth and always will be, until the depression comes, which it always does. And let me tell you, a display is a good thing. It shows people that you can be successful. It can show you a way of life. Dynasty did it on TV. It's very important that people aspire to be successful. The only way you can do it is if you look at somebody who is.

Christmas is the time of year when government and religious leaders put a special emphasis on compassion for the poor and marginalized. Trump used the occasion to gloat over what is perceived, inaccurately, as a victory in the “war on Christmas.” At 9:56 p.m. on Christmas Eve, he tweeted: “People are proud to be saying Merry Christmas again. I am proud to have led the charge against the assault of our cherished and beautiful phrase. MERRY CHRISTMAS!!!!!”

His language—led the charge against the assault—shows how he has weaponized the season. Previous presidents presented Christmas as a time for compassion for the poor, as George W. Bush did and as Barack Obama did in this message:

This is the season to celebrate the story of how, more than two thousand years ago, a child was born to two faithful travelers who could find rest only in a stable, among cattle and sheep.  He was no ordinary child.  He was the manifestation of God’s love.  And every year we celebrate His birth because the story of Jesus Christ changed the world.  For me, and for millions of Americans, His story has filled our hearts and inspired our lives.  It moves us to love one another; to help and serve those less fortunate; to forgive; to draw close to our families; to be grateful for all that has been given to us; to keep faith; and to hold on to an enduring hope in humanity.

Service to others.  Compassion to all.  Treating others as we wish ourselves to be treated.  Those values aren’t just at the center of Christianity; those are values that are shared by all faiths.  So tonight let us all rededicate ourselves to each other.  And, in that spirit, from my family to yours, happy holidays.  Merry Christmas.  God bless you all, and God bless the United States of America.

Trump didn’t refer to the poor in the address he gave at the White House Christmas tree lighting; the event was all about Trump’s imagined triumph, as the headline on the White House press release indicates: “At Christmas Tree Lighting, President Trump Revives the Event’s Religious Spirit.”

Happy Christmas to all.