‘Bach and the Heavenly Choir’
By B. D. McClay
Books
Ecumenism 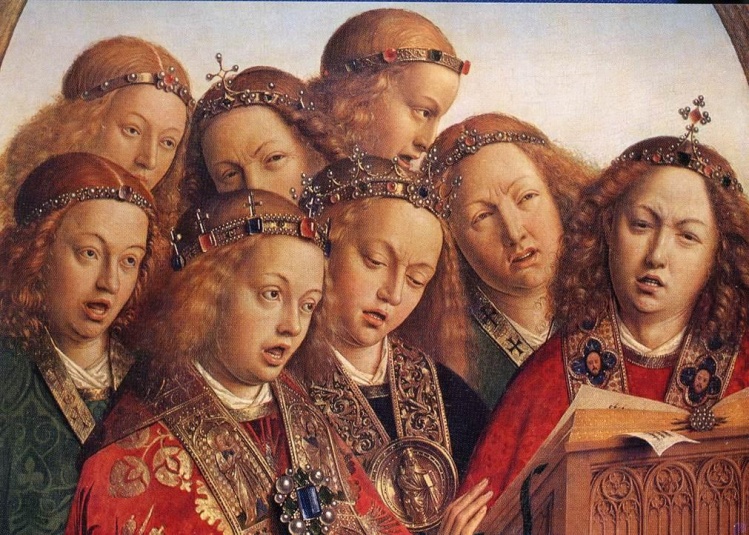 By and large, the five hundredth anniversary of the Reformation hasn’t passed very happily. Based on my observations, day-to-day relationships between Protestants and Catholics seem worse than ever. Well, not ever, obviously. We’re a long way off from a second St. Bartholomew’s Day massacre, and nobody’s nailing anything to any doors. But people I know have raised the question if those of different confessional traditions even can truly be friends.

Perhaps for this reason, this year I’ve found myself thinking often about a strange little German novel from the 1950s, Bach and the Heavenly Choir. Though its author, Johannes Rüber, seems to have had a fairly lengthy career in his native Germany, the book itself didn’t make much of a splash when it arrived in English. (Curiously, one place it was reviewed at the time was, as it happens, Commonweal.) And as far as I know, it’s the only one of his books ever to be translated.

The novel itself is constructed around a fairly improbable scenario: What if a pope were to canonize Bach, or try to? The fictional Pope Gregory, a French abbot plucked from total obscurity to become pope, is a man of good character whose papacy is largely undistinguished. He disappoints friends and foes alike by his general inaction; he doesn’t offer opinions to the press, take stands on issues of the day, push forward candidates for canonization, or publish encyclicals. He spends his time in prayer, playing the violin, and thinking about Bach. And when he’s pushed by one of his cardinals to canonize somebody, well, Gregory suddenly has an idea.

Bach and the Heavenly Choir is a naïve book. The Vatican politics are somehow both too heavy-handed and not heavy-handed enough—Gregory becomes pope in part to shut out an American cardinal, but all actual Vatican conflicts seem to come down to the quirks of characters’ personalities, with little of substance seeming to be at stake. A scene where Gregory feels regret over the poor but doesn’t seem to think he has standing to help them makes me cringe—surely a man so preoccupied by aesthetics could, after all, work at least a little toward other ends. And when he’s asked to produce Bach’s miracles, Gregory replies that Bach’s music is itself a miracle. A pope concerned with the experience of beauty over almost everything else is sweet enough to encounter on the page, but in reality, he would be a sort of monster. And while Rüber raises some rote objections—what about the poor, or people who died in concentration camps, and so on—he’s not interested enough in them to investigate them fully.

Listening to Bach, all Christians are, it claims, united—in experience, if not in actuality.
sharetweet

The most notable resistance Gregory encounters isn’t actually from his fellow Catholics, however, but from Lutherans. They are suspicious of his motives and don’t find the attempt to claim a Lutheran for Rome very flattering. (When I first read this book, that Gregory hadn’t anticipated this resistance struck me as its most true detail, and it still does.) Politely but firmly, they remind the pope that they believe different things:

What troubles us is the fact that the Roman Church places the saints in heaven; despite our great human ignorance it indicates to its faithful followers those whom it says are saints.… Man is judged not by man, but by God alone. We are left the artist, and that should suffice.

I am myself neither Lutheran nor Catholic, and neither was the man who recommended the book to me. He’d clearly remembered it for years, though, and it’s certainly stuck with me. In what, then, does the power of this curious book consist? Though I love Bach, and would certainly entertain the idea that his music is itself some kind of a miracle, it’s also a matter of indifference to me if he’s canonized or not.

But maybe what does resonate in Bach and the Heavenly Choir is precisely its aforementioned naïveté, not least in the way it imagines Christian unity. Christians are, at this moment, certainly not one, and the hope of actually being one seems to be in further retreat all the time. In the Washington Post, Stanley Hauerwas recently made the strange argument that Protestants are a sort of necessary critic to “keep Catholics honest,” which seemed to concede Catholic claims on one hand while maintaining that division, qua division, is somehow good for Christians. As we progress through Advent and Christmas, I think of these divisions with increasing sadness.

Where are Christians one? In Christ, we hope. Bach and the Heavenly Choir suggests that in our dealings with each other, however, we are unlikely to be reconciled through argument, but we might stand a chance through beauty. Listening to Bach, all Christians are, it claims, united—in experience, if not in actuality. If we could somehow keep it going—that delirious internal vertical motion and feeling of community induced by his music—we could be reconciled to one another.

Beauty isn’t enough to bring us together for more than a moment. The arguments do matter. And hard as it is to believe, people who hate Bach do exist. Still, those moments, when they come, are to be treasured. To experience such unity, even if it can’t last, is—to borrow a word—heavenly.