How Trump Has Harnessed Glamour 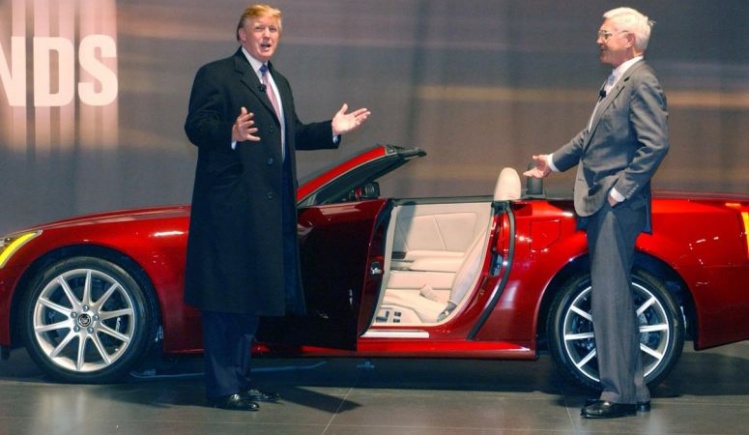 Do you reject the glamour of evil? The question arises from the Catholic baptismal rite and lingers like a smoky cloud of incense, summoning a stark contrast between the spiritual wisdom of the ages and a culture that exalts celebrity glamour, power, fame, luxury, and lust.

Glamour looms so large in our culture that it has imparted an important advantage to Donald Trump as he pursues the presidency. His celebrity persona provides him a unique position in the court of public opinion, and he has used it to encourage and exploit an angry and violent undercurrent in American life. Media accounts routinely refer to the “ugliness” he stirs up at his rallies—journalistic understatement for “hatred.”

This is why Trump’s use of glamour bears close scrutiny. For forty years, Trump has built an aura of stardom that celebrates his success as well as consumerism, materialism, gambling, ego and, at certain points, womanizing. Call it narcissistic, distasteful, or just plain silly: It is still the key to his success.

“Glamour is powerfully persuasive,” Virginia Postrel writes in her 2013 book The Power of Glamour. “Yet because it relies on imagery and channels desire, it is often dismissed as trivial, frivolous, and superficial.”

The persuasive glamour accrued from a long strut on the public stage has stuck to candidate Trump. The immediate political consequences were vast amounts of free airtime from media outlets seeking ratings—an enormous advantage—and a quick ascent to the top of the polls in the Republican presidential race. But that alone wouldn’t explain his strong performance in the primaries. (Ahead of New York’s primary on April 19, polls have Trump pulling more than half of the state’s likely Republican voters.)

Trump’s celebrity licenses him to speak in the abusive way he often does. He has put decades of work into creating the impression that he is a singular success in all he does. Millions of people have read his breezy books on achieving success or followed the reality television series in which he is presented as an omnipotent, all-knowing king—almost a kind of exacting Old Testament god who sits in judgment.

Like other celebrity actors, he carries his stage persona with him—in his case, to the political stage. As such, this celebrity-god can get away with a startling degree of harshness. It’s there in his words—especially when he encourages violence against demonstrators—but also in a style of rapid-fire speech, grimace, and gesture that communicates a bottomless pit of contempt and disgust for the “losers” of this world. The angry message has matched with the mood of enough voters to matter.

Whether for evil or good, Trump has mastered the art of superficial glamour—and that’s what makes him such a political phenomenon. Timothy O’Brien wrote in his recent biography of Trump that the billionaire has spent many years marketing the ideas that “Trump = Glamour” and “Trump = Success.”

Trump has acknowledged as much. “I believe I’ve added show business to the real-estate business, and that’s been a positive for my properties and in my life,” he said in a 1990 interview with Playboy magazine.

During the interview, talk turned to his 47-room country house in Greenwich, Connecticut, his Boeing 727 jet, his French helicopter, his 118-room estate in Palm Beach, his massive yacht. His interviewer asked what all this flaunted wealth meant to Trump. “Props for the show,” he answered.

The glamorous image that Trump crafted was very much designed to achieve success in the New York of the late 1970s and 1980s. Trump, who graduated in 1968 from the prestigious Wharton School of Finance at the University of Pennsylvania after two years at Fordham University, first worked from the office of his father, the developer Fred Trump, in a decidedly unglamorous part of Brooklyn near then-crumbling Coney Island. As Wayne Barrett reports in his 1992 investigative biography of Trump, his initial rise had a lot to do with his father’s connections to the old-time clubhouse politics of the Brooklyn Democratic machine—again, not so glamorous. But he soon had an apartment on Manhattan’s East Side and a regular table at an elegant restaurant.

New York City was staggering close to bankruptcy in that era, making it an especially good time for a wealthy, brashly confident young man to burst on the scene with plans to build stylish real estate projects in Manhattan. Corporations and residents were fleeing the city and manufacturing was dying. The city’s establishment, including its news media, consequently greeted major development proposals like a life preserver for the once-proud Big Apple’s sinking confidence. And Trump played the role of dashing-young-entrepreneur-to-the-rescue to a T. Witness the opening to a 1976 profile in the New York Times:

He is tall, lean and blond, with dazzling white teeth, and he looks ever so much like Robert Redford. He rides around town in a chauffeured silver Cadillac with his initials, DJT, on the plates. He dates slinky fashion models, belongs to the most elegant clubs and, at only thirty years of age, estimates that he is worth `more than $200 million.’

Trump had to be larger than life to get what he wanted in an era when the public stage became a public spectacle. In New York’s City Hall, Mayor Edward I. Koch ruled with a slashing wit. Yankees owner George Steinbrenner was the blunt-talking business executive a city loved to hate. Rev. Al Sharpton commandeered the civil rights movement. Cardinal John O’Connor’s Sunday-morning homilies led Monday-morning papers. U.S. Attorney Rudy Giuliani turned the staid world of the federal court into a showcase for celebrity trials. In the state capitol, Mario Cuomo was the orator who played Hamlet, unable to decide whether to declare his candidacy for president. And then there was Trump—Trump in the tabloid gossip columns, Trump on Lifestyles of the Rich and Famous, Trump on The Oprah Winfrey Show, Trump everywhere—and his brand grew exponentially. As Barrett wrote, Trump, with his “populist glamour,” began to think as early as 1985 about running for president.

Has he used it as a foil for hatred? A 1980s controversy reveals a lot about how he has used his celebrity in politics.

On April 19, 1989, the brutally violent rape of a jogger in Central Park shocked New Yorkers. Police arrested four black youths and one Latino, who were said to have confessed to the vicious act. The city’s news media filled with accounts of teenagers on a “wilding” spree, making it one of the decade’s most publicized crimes. Trump piled on. On May 1, he took out full-page ads in the city’s four major daily newspapers. This is what the ad said, in part:

Mayor Koch has stated that hate and rancor should be removed from our hearts. I do not think so. I want to hate these muggers and murderers [sic; the victim survived]. They should be forced to suffer and, when they kill, they should be executed for their crimes.… Yes, Mayor Koch. I want to hate these murderers and I always will. I am not looking to psychoanalyze them or understand them. I am looking to punish them…. I recently watched a newscast trying to explain the `anger in these young men.’ I no longer want to understand their anger. I want them to understand our anger. I want them to be afraid.

We know now that the defendants were not guilty—their conviction was vacated after the actual rapist confessed and his admission was confirmed with DNA evidence. Many others had presumed the defendants’ guilt, but Trump stands out in his insistence not simply on justice but on hatred.

“Time was when people who sent hate letters had the shame to keep themselves anonymous,” the Pulitzer Prize-winning columnist Murray Kempton wrote in New York Newsday at the time. “But Donald Trump dresses his hatred up as though it were a peacock’s feathers…. We are assured that God does not make trash, which thought disposes of the impression that Donald Trump is not altogether a self-made man.”

Trump’s trappings of glamour—the peacock’s feathers—obscured the malice behind his attempt to rouse the nation’s largest city into hating five youths who were awaiting what turned out to be an unfair trial. He was pleased to report later that he received 15,000 letters from people who supported his full-page ad, and just a few disagreeing. To this day, the ad is praised on a far-right website, even though the youths (now men) Trump accused have been vindicated, at a cost to the city of $40 million.

The 1989 ad was not the last time Trump observed the political power of hatred. In a 2010 interview on CNN with Wolf Blitzer, Trump noted the ascending Tea Party as a challenge to President Barack Obama’s re-election and reflected on the rise of anti-government hatred. “Right now, the level of animosity, the level of almost hatred for our government by our people is unbelievable,” he told Blitzer. “And I'm sure you've never seen anything like it, and I've never seen anything like it.” By the following year, Trump began making a very calculated appeal to the Tea Partiers’ prejudices by claiming falsely that Obama had been born in Kenya. “I think it made me very popular,” Trump was quoted as saying in 2013, according to ABC News. “I do think I know what I’m doing.”

It would be wrong to say that glamour always is a cover for evil—it can also induce people to do what is right. But as the theologian Gerald W. Schlabach wrote in America, “evil needs glamour in a way that the good does not.”