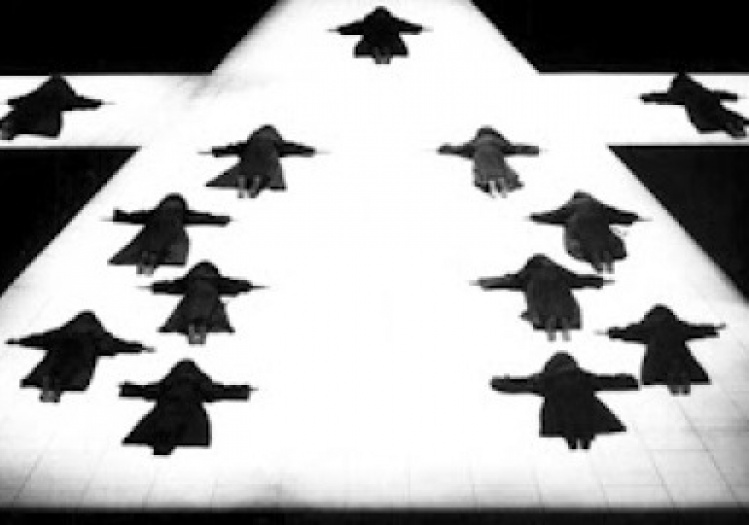 The Metropolitan Opera’s recent production of Dialogues of the Carmelites opens with a group of habited women prostrating themselves on the floor with their arms spread. Their bodies are individual crosses that make up one big cross. This opening for Francis Poulenc’s 1956 opera, adapted from a play by Georges Bernanos and based on a real incident during the French Revolution, seems to subsume the women into a collective identity: they’re no longer Constance and Marie and Lidoine, but “the Carmel.” And yet everything in Poulenc’s opera works against this initial impression, insisting on the women’s individuality—and on their spiritual solitude. Each of them must face her own death alone.

Dialogues tells the story of the young, fearful but idealistic French aristocrat Blanche de la Force (Isabel Leonard), who enters the convent on the eve of revolution. A quick exchange between two of the sisters sets the scene: They start out by complaining about the meals (beans again?) but then note that people have begun to hoard flour, and soon Paris will be out of bread. Both the words and the music of this crowd scene are punctuated by foreboding, but not always at the same time, so casual words get a haunting score and vice versa. These mismatches add to the sense of dislocation the opera creates, and the intuition that death is close and inescapable, lurking even behind the most everyday conversations.

Blanche struggles with her own anxieties and her longing for a heroic martyrdom. When she wants to choose “Sister Blanche of the Agony of Christ” as her religious name, the prioress (Felicity Palmer) chastises her: “Search your heart. One who enters Gethsemane never leaves. Do you have the courage to be forever a prisoner of the holy agony?” Blanche’s monumental aspirations are contrasted with the almost flighty, instinctive heroism of Sr. Constance (Erin Morley), who thinks death is as funny and strange as everything else in life.

The opera is beautifully structured. The first half centers on the slow approach of violence and the brutal natural death of the prioress, who struggles to lead the sisters as her health declines and her terror mounts. Barely able to sit up in bed, she still thrusts a clutching hand forward to point out the way: a didactic, suffering raptor. She howls out her fear of death, and her last implacable words are an unfinished command: “Mother Marie, in the name of obedience, I order you—”

This shattering death makes the foreboding atmosphere of the opera’s second half more frightening and real, both for the characters and for the audience. The nuns debate what to do, whether to seek martyrdom or flee from it. As with the 2010 French film Of Gods and Men, which was also based on a true story of a religious community facing martyrdom, Dialogues focuses on the debate within the community in order to highlight the individuality of each choice. In Dialogues there is one anonymous vote in favor of fleeing, and although Sister Constance afterward claims it was her vote, the audience is left to consider that she might be taking the fall for the fearful Sr. Blanche.

Sr. Blanche receives conflicting advice about what true courage and humility require. Should she ascend to the martyrdom that seems prepared for them all, or would that choice be the result of her own prideful unwillingness to admit that she's afraid? Her own brother comes to the convent to press this question, in a beautiful scene that gives him unexpectedly poignant lines (“I thought I glimpsed, for one second, all of our childhood”). Sr. Blanche walks away from him to rejoin her sisters with a heartbreaking little limp in her stride. But her final vote will not be cast until the very last minute.

Poulenc’s music is conflicted and full of interruptions, mirroring the nuns’ interrupted lives. He is so thoroughly committed to representing each nun’s unique inner life that we rarely hear the nuns sing together; this really is a dialogue and not a chorus. On the few occasions the audience does hear the nuns singing all at once, it is usually their prayers, and this makes each prayer a thrilling, show-stopping moment.

The set is grim but not overwhelming. There’s a grated window made of crosses, and the door of the prison cell where most of the nuns end up opens vertically rather than horizontally—and closes like a falling blade. The final scene, in which the women’s chorus of “Salve Regina” is slowly, relentlessly diminished as one singer after another goes up to the guillotine, is staged as a kind of Communion procession: one by one they go up to kneel.

This is an opera of questions. The questions are spiritual and psychological rather than historical. Dialogues isn’t especially interested in the French Revolution as such. There are moments when you get a hint of class divisions (Sister Blanche’s is shocked at being slapped while disguised as a servant), but for the most part you could set Dialogues in the Roman Empire under Diocletian and its central concerns would be the same. What does it mean to die well? Are there bad ways to be a martyr for Christ? If you die for God, does that cancel out all your prior weakness and irresolution? And conversely, if you die in fear and anguish, is that the final verdict on your life despite all the courage you showed in better days?

Early on, lighthearted Sister Constance suggests that maybe God sometimes gives a person the wrong death, “like when someone gives you the wrong coat in a cloakroom.” There’s a hint here of the Misfit’s sentiment in Flannery O’Connor’s short story “A Good Man Is Hard to Find”: “She would have been a good woman, if it had been somebody there to shoot her every minute of her life.” But the overall arc of the opera suggests that even “the wrong death” can become an offering of the self to God. Maybe Sister Blanche makes a bad martyr, simultaneously too eager and too uncertain, but Dialogues is forgiving of her self-doubt—just as it’s forgiving of the Mother Superior’s horror of death. It recognizes the essential dignity of all its central characters, both in their moments of courage and in their moments of collapse.

After the death of his daughter, who had Down’s syndrome, Charles de Gaulle famously mused, “Now she’s like all the others.” Dialogues rescues its nuns from that communal anonymity of death. They are martyrs—a type of saint often referred to in the collective, without names or faces or any details except maybe how they were killed. The stories of martyrs are often told as if they’re really the stories of the people who killed them; those are the people who are described as making choices, while the martyrs merely suffer the consequences. Dialogues, by contrast, puts the nuns’ own decisions, psychologies, and beliefs at the heart of its story. They may wear the same habit, but in their relationships to God and to one another they’re each as distinctive as a fingerprint, as a single voice.