Hold Out for Joy 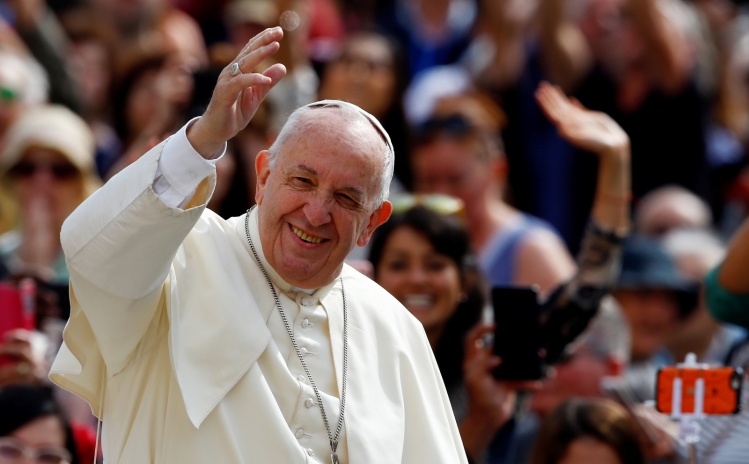 Pope Francis arrives to lead his general audience in St. Peter’s Square at the Vatican May 2. (CNS photo/Stefano Rellandini, Reuters)

“The only great tragedy in life,” wrote the French novelist Léon Bloy, “is not to become a saint.” Pope Francis quotes this judgment approvingly in Gaudete et exsultate, his apostolic exhortation “on the call to holiness in today’s world.” He also quotes a less dramatic formulation of the same idea in Lumen gentium, the Second Vatican Council’s Dogmatic Constitution on the Church: “all the faithful, whatever their condition or state, are called by the Lord—each in his or her own way—to that perfect holiness by which the Father himself is perfect.”

However one puts it, this is an idea that makes many of us deeply uncomfortable. We like our saints to be exceptions, the more exotic the better: an elderly Albanian woman in a sari, a wooden statue of a martyr carrying his head in his hand, a thirteenth-century Italian talking to the birds and rolling in the snow to stave off lust. We are not like that, thank goodness. We are just ordinary human beings, with ordinary human appetites and shortcomings. We aren’t trying to be holy; we’re just doing our best. Or, if not quite our best, then as much as can reasonably be expected. When we say, “I’m no saint,” it’s almost never an admission of failure, but instead an insistence on our full humanity, as if saints were somehow either more or less than fully human—eunuchs, maybe, or angels.

This is, according to Francis, both a failure of imagination and a failure of nerve. Near the beginning of Gaudete et exsultate he writes, “do not be afraid of holiness. It will take away none of your energy, vitality or joy. On the contrary, you will become what the Father had in mind when he created you, and you will be faithful to your deepest self.” And near the end of the exhortation, he makes the point again: “[God] does not want to enter our lives to cripple or diminish them, but to bring them to fulfillment.” Holiness should neither scare nor bore us.

Developing another teaching of the Second Vatican Council, Francis insists, again and again, on the variety of holiness. If all Christians are called to be saints, no two are called to be saints in quite the same way. Nor is most holiness conspicuously heroic; it’s usually quite ordinary, growing through what the pope calls “small gestures.” He offers an example:

A woman goes shopping, she meets a neighbor and they begin to speak, and the gossip starts. But she says in her heart: “No, I will not speak badly of anyone.” This is a step forward in holiness. Later, at home, one of her children wants to talk to her about his hopes and dreams, and even though she is tired, she sits down and listens with patience and love. That is another sacrifice that brings holiness. Later she experiences some anxiety, but recalling the love of the Virgin Mary, she takes her rosary and prays with faith. Yet another path of holiness. Later still, she goes out onto the street, encounters a poor person and stops to say a kind word to him. One more step.

God calls us all toward perfection, but he knows we have to start from wherever we are and approach step by step. He also knows that even this gradual approach would be impossible without grace, and so he gives us as much of it as we are willing to accept. Francis warns against gnosticism and pelagianism, “two subtle enemies of holiness” that offer false substitutes for grace. Gnostics make an idol of explanations. They would dispense with grace by reducing the faith to a comprehensive set of ideas, forgetting that “a person’s perfection is measured not by the information or knowledge they possess, but by the depth of their charity.” Pelagians, for their part, try to replace faith with effort, as if they could, by sheer force of will, pry open the gates of heaven. To them it would feel like cheating to accept salvation as a gift. Lacking humility, they find grace superfluous.

Francis is characteristically blunt on the subject of humility: “humility can only take root in the heart through humiliations. Without them, there is no humility or holiness. If you are unable to suffer and offer up a few humiliations, you are not humble and you are not on the path to holiness.” Naturally, we would all prefer to have our humility without humiliation, just as we would prefer to be sanctified without sacrifice. But this is what H. Richard Niebuhr called Christ without a cross. However various the ways of holiness, however modest or unlikely, they all have at least one thing in common: they must pass through Calvary. “At the core,” Francis writes, “holiness is experiencing, in union with Christ, the mysteries of his life.” If we let them, these mysteries can draw us out of our comfortable inertia toward something larger—toward joy. The only great tragedy, Francis suggests, is to settle for anything less than that.