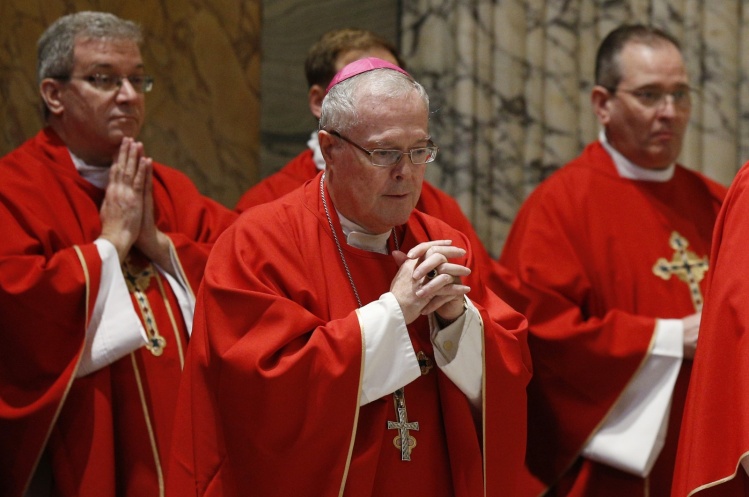 When Msgr. Roger Grundhaus wanted to baptize his niece’s baby in the cathedral of a nearby diocese, there was the simple matter of getting a letter from his bishop affirming that he was a priest in good standing.

Bishop Michael J. Hoeppner of Crookston in northwest Minnesota obliged the retired priest, a former vicar general of his diocese. “He is a person of good moral character and reputation,” he wrote in 2012. “I am unaware of anything in his background which would render him unsuitable to work with minor children.”

But contrary to that blanket statement, Hoeppner had already heard allegations directly from a diaconate candidate, Ron Vasek, that Grundhaus had molested him in the early 1970s. And so, attorney Jeff Anderson confronted the bishop with the letter during a deposition: “That’s a lie, isn’t it?”

“Counsel, can you rephrase in a non-argumentative way?” the diocesan lawyer interjected, and there was no admission from the bishop in settling the lawsuit.

This letter was part of a trail of evidence leading to the announcement that Pope Francis had asked for and received Hoeppner’s resignation as bishop, a first in the United States under the 2019 Vatican regulations designed to prevent cover-ups of clergy sexual abuse. The disclosure that the pope had “asked for” the bishop’s resignation, appearing in a statement from the Diocese of Crookston, marked a significant advance in the long effort to hold prelates accountable for concealing clergy sexual abuse.

But at the same time, there is a void of information on exactly where the Church’s investigators and Pope Francis found the bishop went astray. In lieu of any kind of fact-finding report, we are left with Hoeppner’s vague statement to the people of his diocese: “I apologize to you, as I have apologized to our Holy Father, for my failures in governing as bishop.” In the meantime, he wrote, he would enjoy living in a “warmer climate” near his sister, adding, “I look forward to returning to Crookston for personal visits and will await the appointment of a new bishop here to determine other activity.”

In a telephone interview, Vasek said he was pleased with the thoroughness of the investigation, conducted for the Vatican through Archbishop Bernard Hebda of the Archdiocese of St. Paul and Minneapolis. “I would really like to see what they found in the investigation, but I don’t think we’ll ever see that,” he said, adding that the outcome “tells me there was sufficient evidence there to boot a bishop.” He continued: “I was really pleased to see that Pope Francis asked for the resignation. They could have just said, ‘he resigned.’ They could have said his health was bad.... That tells everything to me.”

As is so often the case for those who wrestle with whether to file abuse charges, Vasek grew up in a devout Catholic family deeply involved in their parish. His mother became friendly with Grundhaus, and the priest visited the Vasek home for Sunday dinners and birthday parties. Vasek volunteered frequently at the parish, and, Grundhaus said in his testimony, he counseled the family after one of Vasek’s brothers died in a tractor accident.

According to a lawsuit Vasek filed in 2017, Grundhaus sexually abused him in 1971. (Grundhaus declined to comment.) As a newly licensed driver at the age of sixteen, he drove the priest to a meeting of canon lawyers in Columbus, Ohio; Grundhaus allegedly made his move on the boy when they roomed together overnight. In a deposition, Grundhaus denied touching him inappropriately, but confirmed that he did room with Vasek on the trip, although in 1972 when he was seventeen. Grundhaus added in his deposition an incident that he said occurred on a similar trip in 1973 when he held Vasek from behind in “kind of a bear hug” as he lay in bed in the morning; the priest said he was horsing around, without a sexual intent.

According to the lawsuit, Vasek disclosed what happened to another priest when he was considering entry into the diaconate program. That led to a meeting between Vasek and the bishop around 2011.

There is a void of information on exactly where the Church’s investigators and Pope Francis found the bishop went astray.
sharetweet

This is where the account Hoeppner gave under oath in a deposition veers sharply from Vasek’s account. Vasek alleges that the bishop coerced him into silence by threatening his success in the diaconate program and also that of his son Craig, who was ordained a priest in the Crookston diocese in 2010. Hoeppner denied that, saying he didn’t follow up on Vasek’s allegation because Vasek wanted it to remain confidential. (Vasek ultimately withdrew from the diaconate program.)

Meanwhile, a judge presiding over another case against the Crookston diocese ordered the diocese on August 13, 2015 to turn over “all information” about clergy sexual-abuse allegations to the plaintiff’s attorneys. But Vasek’s allegation against Msgr. Grundhaus was not handed over.

The allegation did come to the attention of officials in the neighboring Diocese of Fargo, though, when they reviewed whether to let Msgr. Grundhaus assist there. As a result, Vasek was asked to meet with Hoeppner at his private residence and there, according to Vasek, the bishop coerced him into signing a document that essentially recanted the allegation he had raised.

Under oath, Hoeppner said he had “absolutely not” done that. What’s not disputed is the resulting statement: “I, Ron Vasek, regarding a trip I was on when I was 16 years old, and on which a priest of the Diocese of Crookston was also participating, clearly and freely state that I have no desire to nor do I make any accusation of sexual impropriety by the priest toward me,” stated over his signature, dated October 21, 2015.

In his testimony, the bishop called this a “normal procedure” done without consulting a lawyer, and said no one was given a copy of the letter. He kept it, and, he testified, didn’t save it on his computer “because it’s confidential.” But confidential or not, the diocesan Safe Environment coordinator testified that the rules required all allegations to be reported to the vicar general of the diocese. (An attorney who represented Hoeppner in Vasek’s lawsuit didn’t respond to a request for comment.)

“It’s just the most grotesque abuse of power,” said Anne Barrett Doyle of BishopAccountability.org, which tracks bishops’ role in the sex-abuse crisis. She questioned the deterrent effect of allowing Hoeppner to retain his status as a bishop.

Hoeppner settled the coercion lawsuit Vasek filed in September 2017, not long after Vasek’s lawyers filed papers charging that the Crookston diocese had covered up Vasek’s allegations in the earlier lawsuit. There was no admission of wrongdoing; the bishop again denied pressuring Vasek, though.

And then there was that letter to the Archdiocese of St. Paul and Minneapolis, the one in which the bishop said he was unaware of anything in Grundhaus’s background to prevent him from working with children.

“That’s not the truth, is it?” attorney Anderson asked him under oath.

A: I’m respecting the confidentiality. That’s why I signed that.

Q: Is that true or is that false?

A: I’m respecting the confidentiality.

Vasek told me he had inquired with local authorities about whether the bishop could be charged with perjury, but was told it was a difficult type of charge to prove. Still, he is glad to put the Hoeppner matter behind him. “I was just praying that the pope...would find him guilty,” he said.