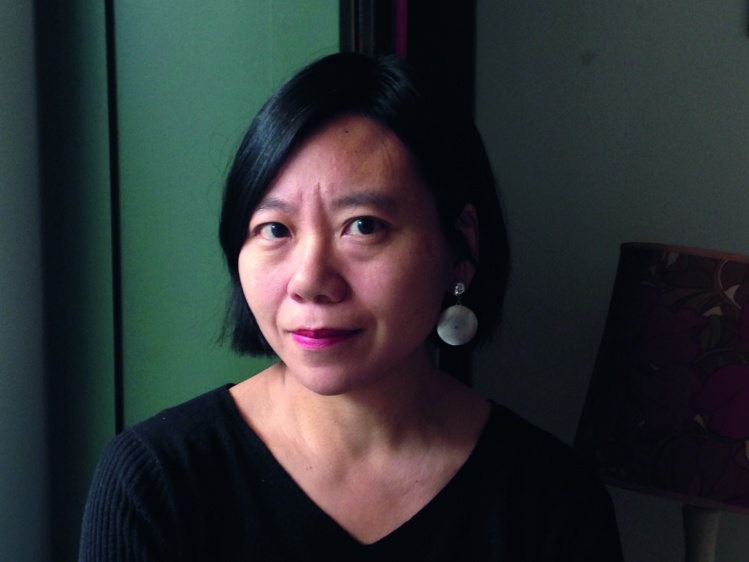 “There’s a certain brokenness in my writing,” the writer Xiaolu Guo reflected in an interview with the Weatherhead East Asia Institute. Guo has been translating herself ever since her first English-language novel, A Concise Chinese-English Dictionary for Lovers, was published in 2007. After completing seven novels in Chinese, she explained, writing one in English for the first time caused her to undergo “a sudden loss of identity as a Chinese language writer” and a loss of experience through self-translation. Out of this linguistic and existential loss, Guo would go on to write four more novels, a short story collection, and a memoir—all in English. For Guo, telling stories in English is an ongoing project of “trying to create a hybrid voice” that captures a life lived across China, Europe, and the United States.

In Guo’s latest novel, A Lover’s Discourse, translation and self-translation are the central concerns of her protagonist, a Chinese film student studying abroad at King’s College in London. Reeling from the recent deaths of both her parents, Guo’s unnamed narrator arrives in the United Kingdom at the end of 2015, six months ahead of the Brexit vote. Along with the charged yet indecipherable language of “Brexit buses,” “vote leave,” and “Referendum,” she is hit with baffling quirks of English phrasing, like being asked for her “family history” at a doctor’s appointment. (The narrator is not, she learns, expected to declare whether she is from a peasant or Communist Party family, but to indicate the diseases she is likely to inherit.) While still getting her geographical and linguistic bearings, she meets her (also unnamed) lover, an Australian of German descent, to whom she is able to admit, “Every day I hear some new English words. I hear them but I don’t register them. As if I was half deaf.”

The narrator faces an unending series of these confounding moments, in which meaning eludes her because the words are shrouded by context, history, or accent. She is surprised by strange double meanings in words like “felt,” and struggles to tease out the metaphor of “cabin fever” or metabolize a portmanteau like “Brexhausted.” But beyond the arbitrary vocabulary of idioms, some things are simply untranslatable. English words without Chinese equivalents cannot cross smoothly from speaker to listener, and instead float somewhere apart from them both. The narrator struggles to pin down the precise Chinese translations of “claustrophobia,” “bungalow,” or the fernweh her lover feels—a German term for neither homesickness nor wanderlust, but “distance pain, an ache or lust for a place where you want to belong.”

In Guo’s telling, we belong either to a world someone else speaks into being, or we are locked out of it. Often, it’s the imprecision of English that distresses the narrator, such as when her lover invites her over to his “house,” which turns out to be a dreary flat. So often translation sets up expectations that go unmet or are upended entirely, resulting in deep frustration. “I didn’t come from this alphabet,” she laments. “I came from ideograms.”

Watching her struggle with the idioms and maddening irregularities of English was to watch her question everything she knew about Cantonese, about language.
sharetweet

These experiences are disorienting, making the narrator feel not only unmoored but also unreal to her own self. Reading A Lover’s Discourse, I was visited by sharp memories of my mother’s struggle to learn English while I was in grade school. I had no answers for why the phrase “feather in your cap” meant an achievement you flaunt, or why we add “poke” to “slow” when urging someone to hurry up. Watching her struggle with the idioms and maddening irregularities of English was to watch her question everything she knew about Cantonese, about language, and about who she was if she couldn’t express herself precisely.

This specific loneliness pierces nearly every scene of A Lover’s Discourse, even when the lovers are together. The narrator’s isolation comes from two kinds of losses, which she names in Chinese. The first, wu wo, is “like no self. No I. No existence.... My body is here but I don’t feel I am here, right now. I don’t feel my existence in this environment.” The second, wu yu, is “wordlessness, loss of language.” Readers may reach for adequate translations themselves: disembodiment, dissociation, aphasia. But English words can’t capture losses so deeply tied to being a foreigner. In a strange place and in a strange language, the narrator is not fully herself. What does that leave her with? “I owned nothing in this country. Come to think of it, I didn’t even own myself in this country.”

Being bilingual here does not bring a sense of duality or expansion. Quite the opposite: becoming bilingual is a loss for the narrator. “Even though I speak English, and I can read and write in English, still I feel monolingual,” she reflects.

Whatever I spoke, whether it was my borrowed English language or my native Chinese Mandarin, I didn’t feel I had that language in me. That language spoke for me, instead of my speaking it. That language had existed before me and would continue after me. And I just wore it like clothes. Then it would abandon me when I die.

A specific loneliness pierces nearly every scene of “A Lover’s Discourse,” even when the lovers are together.
sharetweet

In trying to explain the feeling of wu yu, the narrator is reminded of how the French literary critic Roland Barthes described  “the strange signs and sounds” and “the miscommunications and the silence” on a visit to Japan. Barthes is a crucial influence on both the narrator and A Lover’s Discourse as a whole. (Guo’s novel borrows its title and its structure of brief, interrelated fragments from Barthes’s 1977 book of the same name.)

But from her lover, Guo’s narrator discovers that she has misread and perhaps misunderstood Barthes all this time. She had related to Barthes because in his books, he was “like a woman who could not stop talking. A good woman brimming with words…. But in fact, the book was about a homosexual man’s view of love and desire.” What she had once deeply identified with is suddenly made strange, and she is shaken by the revelation of Barthes’s sexual orientation. “Had I completely misunderstood Barthes? Or had I misunderstood myself?”

Watching the narrator reconfigure her relationship to Barthes is to witness her capacity and desire to reconcile her past, even as she works to free herself from it. After her parents died, she felt her attachment to them and to China begin to die as well. And yet, that attachment clearly endures as she strains to reconcile their distant and difficult relationship, which in turn animates her relationship with her lover: “Now as I thought of my love for you, it was like an extension of my love for my father, or a father in a different land, who would teach me how to live, away from familiar landscapes and languages.”

But there are no familiar landscapes for the narrator. In England and in China, she is unmoored, restless, homesick, alienated, cloaked in wu-wo. On the houseboat she reluctantly moves into with her lover, she feels “the life we shared now was simply a camping life, a childish life, a life without roots.” On a trip to Shenzhen for her doctoral field work, she views her home country “with foreign eyes and a Western perspective,” as a land where, despite the color and vitality, “my life has no weight.” On a trip to her lover’s homeland in Australia, she misses “the big grey dirty urban city with human interactions.” And on a farm in Germany that they almost buy together, she does not “feel the vigor of life,” but longs for “the feeling of struggling and living among other people.”

Where can we belong if we feel separated from ourselves, if language divides us from a shared reality with others? How real can we be without common ground? In the end, what holds Guo’s narrator together is not definition but negotiation—the linguistic clashes, corrections, and concessions that build her hybrid voice. The lovers stay together with the same kind of compromise translation requires. They each sacrifice a sense of complete comfort and belonging to any one city, language, or lifestyle so that they might both belong to each other and the family they are building. In a sense, they decide they will belong to themselves.

Lovers speak in “figures,” Barthes writes in A Lover’s Discourse. He describes these fragmented outbursts of language as more like spontaneous linguistic gestures than deliberate structures of meaning. As he puts it, “It is by language that the other is altered; the other speaks a different word, and I hear rumbling menacingly a whole other world, which is the world of the other.” Translation, with everything it confounds, surrenders, and creates anew, is perhaps a powerful way to encounter the whole other world of lovers and strangers alike: we give, we receive, we are transformed.