‘The Crown’ depicts a monarchy that’s not unlike the papacy.
By Massimo Faggioli
Pope Francis 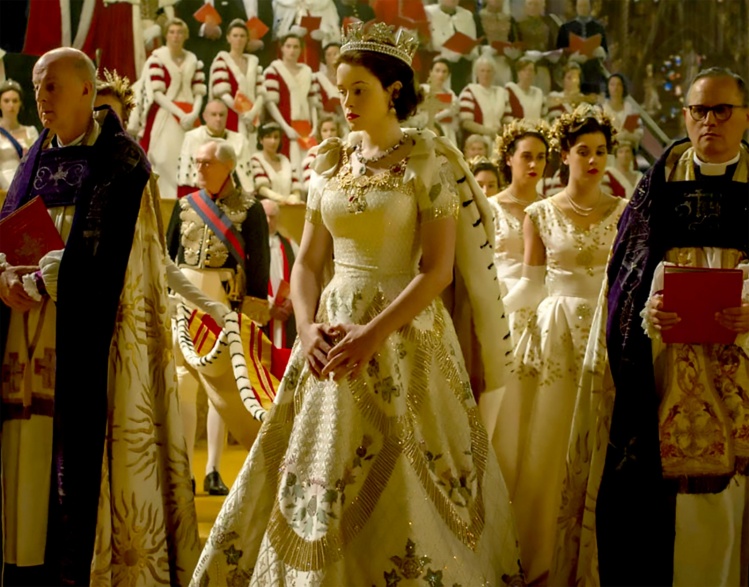 We can romanticize or spiritualize the papacy as much as we want, but we should also remember it’s a monarchy. I was reminded of this fact while watching the latest season of Netflix’s The Crown. With its dramatization of the reign of Queen Elizabeth II, the series inspires reams of pop-culture commentary and critique. But it also presents the British monarchy itself as a subject for further study and comparative analysis, and so offers a way to think about the papal monarchy as well. Yes, it’s only streaming-TV. But fictional treatments can sometimes help us view the “historical” record of things—even the truths, the half-truths, and the myths surrounding the Vatican.

The obvious recent precedent is The Young Pope, Paolo Sorrentino’s 2016 series (which he followed up with The New Pope in 2020). Though plainly fictional, The Young Pope was clearly inspired by the transition from Benedict XVI to Francis in 2013, and how it played out not just in the Vatican but throughout the Church. But The Crown too has something to say to Catholics about monarchical epochs, as there are parallels between the Vatican of the last century and the reign of Elizabeth II beginning in 1952. Both the papal and British monarchies represent empires that have been shrinking, in different ways, over the last one hundred years. The fourth season episode of The Crown (titled “48:1”) opens with then-Princess Elizabeth’s famous twenty-first birthday speech from Cape Town. The voice of the future queen is accompanied by images of the many different places that still constituted the British empire in 1947, with subjects around the world listening raptly—a benign and paternalistic embodiment of service to the empire. At the time, imperialism and Christian missions (Catholicism’s included) were still very much a joint enterprise. In 1940, for example, the concordat between the Catholic Church and Portugal included a “missionary agreement.” In 1953, the Church reached an agreement with Brussels regarding the Belgian Congo, winning tax exemptions in the colony in return for allowing Belgian government involvement in the establishment of dioceses and the appointment of bishops. Both sides agreed that their agreement should remain secret. Catholicism’s exit from colonialism did not happen overnight; it has been an ongoing process since Vatican II.

The parallel shrinking of the British empire as seen in The Crown is a history of crises, with few moments of tranquility, always unfolding against a grand backdrop of palaces and country estates, not in Parliament or board rooms. It can remind viewers of the intrigues in the Vatican and the Roman Curia, which for centuries were run as a political and financial enterprise marked by ruthless competition between different families and dynasties. But in both cases we can see the loneliness of those at the top, and the frustration over the limits on what they can say and do. A constitutional monarch like the queen of England is “a sovereign who reigns but does not rule.” The pope is not a constitutional monarch, and in theory his power is absolute (especially as a sovereign of the Vatican City State, where there is no constitution to limit his power). But in fact the power of a pontiff is even more limited than a constitutional monarch’s, pace the doctrines of Vatican I on papal primacy and infallibility one hundred and fifty years ago.

Both the papal and British monarchies represent empires that have been shrinking, in different ways, over the last one hundred years.
sharetweet

For both the British and papal monarchies, strong symbols and established rituals help conceal weakness and the limits of power. In the coronation episode of The Crown’s first season, both the constitutional and constitutive value of ritual is made clear. The ritual element protects the monarch but also shields her from having to reveal too much about herself. This is often the case with popes, as well. But Francis has in a way upended things; more than his predecessors, he has chosen to lower the shield that ritual provides, revealing himself and the person he really is. This has injected unpredictability into the operations of the Vatican—which prizes predictability—making some of its courtiers nervous, but allowing others to thrive. In The Crown, we see this unpredictability in Diana, who as “the people’s princess” creates a kind of upheaval similar to what Francis has done in denouncing the clericalism of his brother bishops and casting himself more as part of the people of God than of the Curia.

Yet this also presents dangers. In such an unpredictable environment, the elites who would normally support the monarchy with devotion and loyalty might be less inclined to do so—and less inclined to take the fall for the head. In The Crown, we see this in the case of palace press secretary Michael Shea, who is asked to leak information about Elizabeth’s opinion of Prime Minister Margaret Thatcher, though Shea’s eventual firing is depicted in a completely different way than it happened. Church history is filled with examples of servants of the Church whose loyalty to the monarch compelled them to take the fall for merely obeying an order, or even for something that they never actually did. But today we see how Carlo Maria Viganò and other high-profile clerics challenge Francis and papal authority so directly, accusing the pope of something that they failed to do (as we saw in the McCarrick Report). The reliably devoted cast of courtiers and elites has been destabilized and cannot be counted on to support the institution of the monarchy as it has traditionally.

Ironically, electronic media (and television in particular) have been largely responsible for this phenomenon. Openness, transparency, self-perception: these became bigger concerns with the arrival of mass communications. “The age of deference is over,” the character Lord Altrincham tells a soon-to-be-enthroned Elizabeth, urging her to modernize her court if not the monarchy itself. More than fifty years later we see how fully the papacy has embraced modern “media friendliness”—interviews, documentaries, social media, on top of all the traditional literary and scholarly genres a pope traditionally makes use of.

It’s not certain whether the British monarchy or the papacy could use the media to regain the popular legitimacy that has been slipping away for so long. And if it were even possible, is it advisable? With the need for transparency also comes the need for calibration: How much transparency is too much before the institution itself is put at risk? In the final episode of The Crown’s third season, Princess Margaret says to Elizabeth, “That’s the thing about the monarchy. We paper over the cracks. And if what we do is loud and grand and confident enough, no one will notice that all around us it’s fallen apart. That’s the point of us.” But is that the point of a papal monarchy? If so, then it might be a blessing to have popes who are original and very different from one another. But it could also be a problem. In an early episode of The Crown, Elizabeth’s private secretary Sir Alan (Tommy) Lascelles cautions the young queen about exhibiting too much individuality. “It’s when the rot starts,” he tells her. The individual personality of a pope has always influenced interpretation of the papal ministry. But never has that been more widely visible to the world than it is now. This “individualization” of the papacy allows for more evangelical authenticity. But it can also come at the cost of diluted authority as witness to the faith of the Church; consider, for example, that in the encyclical Fratelli tutti, more than 40 percent of the citations are of Pope Francis quoting himself.

Given the composition of the college of cardinals today, the popes who follow Francis are likely to exhibit stronger, even more individualized personalities. They won’t fit the mold of those who preceded John XXIII. The envisioned reform of the Roman Curia will involve more than the decentralization of Church government and the technocratic rationalization of resources; it will no doubt also be influenced, perhaps significantly, by the personality of the man in the monarch’s role.