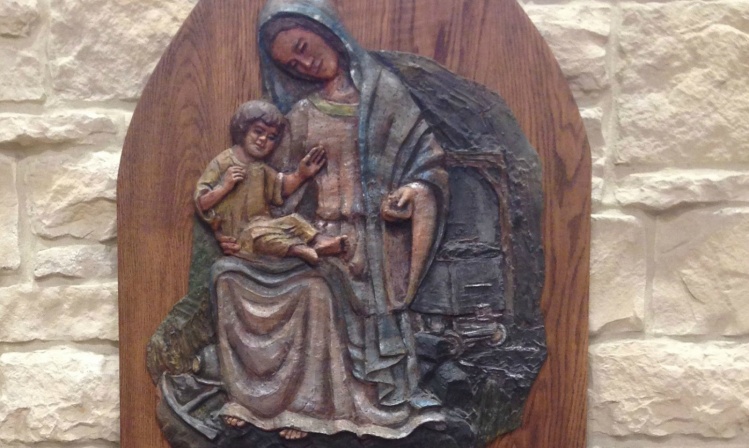 At the only Catholic church in Hazard, Kentucky, Sunday Mass starts at 11:30 a.m. But for the parish-life director, Pat Riestenberg, the day starts much earlier. In the early-morning stillness, she moves around the parish hall, getting the church ready for the one day a week when the building will buzz with activity.

A former math teacher from Ohio, Riestenberg moved to Hazard to volunteer for a year or two, and decided to stay. Now on her twenty-seventh year at the parish, she lends her quiet resolve to all its elements, managing the finances, teaching Sunday school, coordinating volunteers, and ensuring there are always extra canned goods on the church’s pantry shelves for anyone who needs help. Ever since the church’s longtime pastor retired last summer, Riestenberg must ensure that the life of this small, now-priestless church goes on.

It’s a unique challenge. In a diocese where only 3 percent of the population is Catholic and in a state where 25 percent of children live below the poverty line, Riestenberg and the parishioners of Mother of Good Counsel must sustain a community in a region with few Catholics, and in a corner of Appalachia that much of the country has left behind.

Part of that task means commemorating the community’s milestones. On this Sunday in June, a seven-year-old boy is making his First Communion, and a parishioner is turning seventy-five. To celebrate, both families have brought white-frosted sheet cakes. Thirty minutes before Mass starts, people begin to arrive, congregating in the parish center to chat and catch up. Because driving to Mother of Good Counsel, the only Catholic church in three counties, can take some families almost an hour, many parishioners arrive early to socialize in the parish center, something they can’t easily do during the week.

At eleven-thirty, the parishioners move into the church. Someone has turned on the church’s lights, suffusing the room with soft warmth. Thick wooden beams arc across the ceiling, making the room feel secure and cozy. Down the center aisle and behind the wooden altar, a clay carving of the Miner’s Madonna hangs on the wall. The relief shows Mary balancing an infant Jesus on her lap, her head tilted downward like she’s listening. Behind her, a metal cart loaded with coal sits at a mine entrance; a pickaxe and a miner’s helmet peep out from under her feet.

As the congregation settles into its seats, Riestenberg stands in front of the lectern, closer to the people, and welcomes everyone. The parishioners are a mix of older locals and young families with squirming toddlers. With only seventy-four families in the parish, Mother of Good Counsel is a tight-knit community. The church is also surprisingly diverse. Even though Perry County’s population is 96 percent white, there are parishioners here from Syria, Lebanon, Taiwan, Mexico, and India; many work at a nearby hospital. In a town where the nearest dining-out options are a Long John Silver’s or a Hardee’s, the church’s annual international dinner featured, among other dishes, homemade pollo con queso, spaetzle, and Filipino pancit noodles.“And the best part was that I didn’t have to cook a thing,” Riestenberg told me with a grin.

Riestenberg strums the opening hymn on an acoustic guitar. A Franciscan brother and a female cantor lead the singing, as Fr. Michael Chowning, OSM, walks down the aisle. He was the resident pastor here for twenty-three years before he retired, and he’s back to say Mass for this weekend. Since Chowning retired, a volunteer Glenmary Home Missioners priest drives almost two hundred miles from Cincinnati to say Mass because there aren’t enough priests in the diocese to send a permanent replacement.

Chowning and the little boy receiving First Communion walk toward the altar together, the priest in his vestments, the little boy in a nice plaid button-down. The boy maintains a solemn expression, and keeps his hands clasped firmly in front of him.

The lector stands at the lectern and reads excerpts from the Book of Jeremiah and the Letter to the Romans in a clear, steady voice with a hint of a twang. Behind her, four stained glass windows frame the altar, two on either side. The windows face west and at sunset, the last light of the day streams through, dousing the walls with gold and violet light.

Mother of Good Counsel was designed to resemble the small stone chapels that dot the Italian countryside. The original building, built in 1939, was a low rectangle with a rounded bell tower on the roof. But it’s still a Kentucky mountain church; the thick stone walls are built of gray limestone dug from a quarry a few miles outside of town.

Chowning stands to read the Gospel. “Even all the hairs of your head are counted,” he says, his low baritone voice rumbling. “So do not be afraid; you are worth more than many sparrows.” He reads slowly and unselfconsciously, with the easy cadence of a good storyteller.

The door swings shut, but not before a gleeful “Wheeee!” echoes through the church.
sharetweet

“Jeremiah is also a young man, called to be a prophet. And he tried to get out of it,” Chowning says as he starts his homily. He looks at the little boy, and gestures for him to come to the front of the church. Together, the priest and the boy walk to the right of the altar, to the baptismal font. It’s really more of a baptismal hot tub—a spiral staircase leads down into a pool several feet deep. A stone wall juts out above it; water can trickle down the rocks to fill the pool.

Chowning points to the pool and asks the boy if he remembers when he was baptized the year before. The boy nods. That was the first sacrament of initiation, Chowning explains, half to the little boy and half to the congregation. Now you’re going to receive the second.

The boy sits down, and the priest turns to face the church. He circles back to the first reading. Jeremiah complains but he never loses his love and trust in God, Chowning says. “I hope this boy never loses that.” He pauses and asks the congregation to acknowledge how God has accompanied them, and how he challenges them. “I’m never finished being a disciple,” he says, looking up at the parish he served for much of his life. “I’m never done following the Lord. It’s a challenge the Lord gives to all of us.” He folds his hands and lets the church rest in a moment of silence.

Riestenberg’s guitar eventually breaks the silence, this time for the hymn, “Make Me a Channel of Your Peace.” As Chowning leads the Our Father, everyone reaches out to their neighbor to hold hands. For a minute, it looks like the church is playing a game of Twister as people turn their upper bodies and stretch out their arms to reach the people in the next pew. At the sign of the peace, everyone breaks and shakes hands. The priest walks up and down the aisle, shaking hands with each person he passes.

The little boy goes first for Communion. After he gives him the host, Chowning gently steers him toward the chalice, which the boy holds carefully with both hands. Chowning blesses each kid in the Communion line, although one dad has to rush his enthusiastic toddler outside. The door swings shut, but not before a gleeful “Wheeee!” echoes through the church.

With a flurry of closing prayers and guitar chords, suddenly the Mass ends, and the priest and the new communicant walk down the aisle, the boy no longer so solemn. The pair reach the church door, and in the instant before they swing it open, the two figures—one short and one tall, one young and one old—pause, side by side. Then the boy moves first, or maybe it’s Chowning, and then the doors are open and Riestenberg is passing around second slices of cake to everyone, and there’s talking and laughing and a round of Happy Birthdays, until one by one the parishioners get into their cars and drive away, turning back to wave one last time at Riestenberg and Chowning. And the little stone church in Hazard is quiet again.