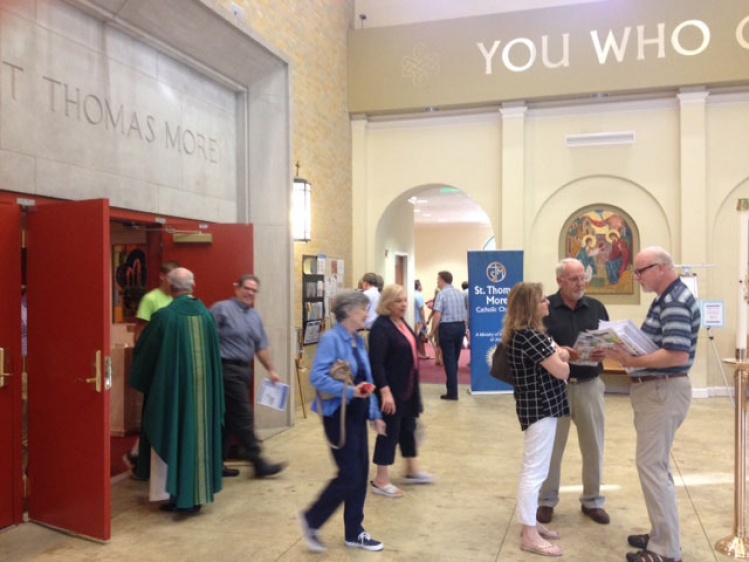 Decatur, Georgia, is older than Atlanta but has become part of the larger city’s urban sprawl. It is a gem of a town, relaxed and easy-going. The humorist Roy Blunt, returning to his hometown after decades spent in more sophisticated haunts, pronounced Decatur to be just about the perfect sort of place to live. St. Thomas More parish sits on the edge of Decatur, with its vaguely Romanesque/Mediterranean buildings dominated by an elementary school. My wife and I attended Mass there when we first moved to Atlanta, since the church was only a stone’s throw beyond the Atlanta city-limit sign and we lived less than a stone’s throw on the Atlanta side of the sign.

In those days, diocesan priests ran the parish, the entire setting seemed grimly functional, and the Sunday Eucharist offered little to those seeking some sense of liturgy or an occasional on-point homily. Having had more than enough of bricks-and-mortar suburban parishes, Joy and I fled to the downtown Basilica of the Sacred Heart, on whose excellent worship and impressive social ministry I reported in the last iteration of these liturgical dispatches (“Celebrating Mass,” January 30, 1998).

I was prompted to visit St. Thomas More for the 9:30 a.m. Mass on July 9 partly because it was convenient, but also because I was curious about what changes might have been made since the parish a few years ago was placed in the hands of the Society of Jesus. The Jesuits have become a more visible presence in Atlanta, especially because of their successful launching of a Christo Rey high school. Two Jesuit priests form the heart of a ministerial staff that otherwise includes a balanced mix of male and female laypeople.

My pre-Mass impressions were positive. The church showed an architectural upgrade that greatly improved the façade. On entering through a set of arches, I made my way into a large foyer that clearly serves as a gathering place around a baptismal font. Around the walls of this space are frescoes representing classic icons. To one side is an adoration chapel, fronted by a sign-up sheet for volunteers to maintain perpetual adoration. On the other side is a hallway leading to first-rate restrooms (don’t snicker) and a family room for restive little ones. The foyer is well-stocked with literature that, unsurprisingly, bears Jesuit features: the feast of St. Ignatius, brochures for the Ignatian House of Spirituality (north of Atlanta), and for Christo Rey High School, ministries for social justice. Coming in from an already steaming Southern day, I was grateful for the super-efficient air-conditioning that easily handled the body-heat of a considerable congregation.

A final positive, even enthusiastic observation: I took careful note of the congregation as it streamed in, and was impressed not only by the size of the crowd—well over three hundred—but by its youth. This was not a remnant gathering of the old and the halt. I may have been the oldest (and haltest) worshiper present. This was predominantly a congregation of young married couples with many children in tow: mostly Caucasian, but also African-American and Asian, proportionate to Decatur’s demographics. “Of course,” I thought to myself, “this parish has a school, and these are the parents of students.” But then I looked more closely, and realized that most of the children were not even school age; they were infants in arms and toddlers. There were some older congregants, but the overwhelming impression was of youth and fecundity. This is not, in short, a parish that depends on its geriatric members; it is a parish like those in the suburbs long ago, flush with new life and energy.

This is not, in short, a parish that depends on its geriatric members; it is a parish like those in the suburbs long ago, flush with new life and energy.
sharetweet

As far as I could tell, nothing had changed in the church’s interior, and sad to say, little of the life and energy of the congregation was reflected in the liturgy itself, after the glad smiles and handshakes of the opening greetings. Same missalettes as before, same selection of less-than-musically-or-theologically-profound hymns, same lack of an organized choir, same dispirited accompaniment by piano, organ, and (for some reason) guitar. People seemed to join in the spoken and sung responses, as much as they were able when not wrangling toddlers, and they seemed happy enough with the way things were at St. Thomas More’s Eucharist, and in light of that fact I am still pondering whether a certain sort of complacency is really such a bad thing.

Since my flight years ago from St. Thomas had been precipitated by one of the truly bad sermons delivered by the then-pastor on Christmas Eve, I was hopeful that the Jesuit presence, while not infecting the liturgy with the gravity and grace expected of, say, a Benedictine, might compensate with a better class of homily. So after hearing the readings from Zechariah 9:9–10 and Romans 8:9–13 competently delivered by lay readers, and having listened to the pastor’s reading of Jesus’ invitation to come to him and take up his yoke, from Matthew 11:25–30, I settled back when the pastor left the pulpit and walked down to the pews, ready for the intellectual feast that Jesuitical learning and wit had prepared.

I can state unequivocally that the sermon, while not an intellectual or spiritual feast, was better than the one that, years earlier, had driven me from St. Thomas. The pastor dealt only with the Matthean passage, and the upshot of his remarks was that, while Jesus was a good Jew and loved the law, he never let the law get in the way of love, as the Pharisees did. With explicit reference to Pope Francis’s own emphasis on mercy over legalism, the pastor drove home the point (one he confessed he and the vicar seemed to make in every sermon) that love and mercy are supreme. Thus, the congregants should not obsess about observance and concentrate on love.

Now, apart from the easy caricaturing of the Pharisees (an unfortunate staple of Christian preaching), there was certainly nothing dreadfully wrong in the pastor’s message. But I kept wondering if the pastor (a man near my own advanced age) might be speaking to people whose problem may not be a scrupulosity about regulations so much as a disregard (or even ignorance) of them. But, the pastor insisted, he was the one hearing confessions, so he must know his audience. And perhaps it is too much to expect a congregation this youthful and this caught up in childcare either to demand or to appreciate Jesuitical learning and wit.

The congregation recited the Apostle’s Creed rather than the Nicene Creed as its confession of faith. The Prayers of the Faithful had the (now) predictable emphasis on social justice and (more touchingly) the sicknesses and deaths of named members of the parish. The Eucharistic Prayer was spoken until its final doxology and answering “Amen.” The Lord’s Prayer and the Kiss of Peace were standard. The eucharistic ministers were evenly split between men and women. Congregants received Communion under both species. Final prayer, final blessing, and mercifully only one announcement, before we returned, singing, to the Decatur sunshine, parish bulletins in hand, refreshed once more by the mystery of a sacramental presence that can lift our poor humanity through the humble instruments of our flesh to moments of divine indwelling and transformation.

The Myth, the Monk, the Man