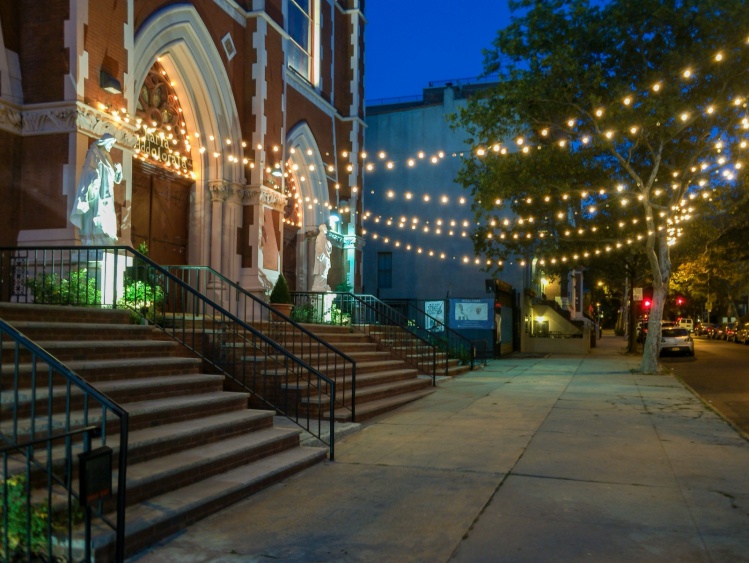 Brooklyn is still sometimes called the borough of churches but it’s generally more synonymous with the hipster-millennial culture both celebrated and lampooned in the media. The tension is reflected somewhat in religious census data showing that out of the borough’s 2.6 million residents, 23 percent identify as Catholic and 22 percent as unaffiliated (the third largest group, at 18 percent, are Black Protestants). The socio-economic shifts of the past two decades are evident far more concretely in the dozens of churches and parish buildings converted to condominiums and secular private schools, a phenomenon prompting wagers on how long Brooklyn’s ecclesial nickname will apply.

I currently belong to a parish that by many measures is thriving, aided perhaps by the same gentrifying forces that have sped closures, consolidations, and sales of church property in other parts of the borough. We joined it the spring after 9/11, leaving Sacred Hearts & St. Stephen, the old neighborhood parish where my son was baptized. Neighborhood parish: a romantic notion, redolent of the city’s European immigrant past, of holy-day processions through the surrounding streets, of peasant traditions carried from distant southern-Italian villages and exerting their mysterious influence on contemporary worship. Yet it was just those qualities, held in a clannish, crabbed ownership increasingly tinged with Bush-era jingoism and xenophobia, that encouraged our exit. For years I’d thought about going back, if only for one Mass. On a warm Saturday afternoon in late June, I finally did, walking a few short blocks to attend the 5:30 vigil.

The atmosphere, in every sense of the word, has brightened considerably. On the way into the church I was smilingly presented a bulletin with some inserts, a magazine-sized missal, and a smaller but thicker paperback hymnal. Signs outside proclaimed “All Are Welcome,” in keeping with recent diocesan messaging, but the warm greetings I received from the handful of people on hand seemed genuine. It was disarming. Based on those old experiences, I’d come with my guard up. Did I really want to lower it?

The building itself is representative of the late nineteenth-century style of urban church architecture. It’s an imposing structure, towering over the surrounding brownstones and row-house apartment buildings, which at one time were home to first- and second-generation Irish- and Italian-Americans who worked the nearby waterfront, then to their descendants who entered the trades and office-worker class, and then, increasingly, to upper-middle-class professionals lured by the safe streets and well-regarded public schools. Its steeple dominates the sky beyond my living-room window, and indeed is said to have served as a beacon to ships entering New York Harbor. (The Sacred Hearts & St. Stephen website details a rich and colorful history, including the establishment of the associated school by Frances Cabrini in the 1890s, and the merger of the two parishes when construction of the nearby Brooklyn-Queens Expressway necessitated demolition of Sacred Hearts in the late 1930s.)

A grand set of high stone steps leads to a central arched entrance flanked by two smaller doors. Another high set of steps inside leads from the vestibule to the sanctuary, which while striking in its vast, ornate excess manages to feel intimate. Since the sale of its nearby school a decade ago, the church has undergone refurbishing; the interior is well lighted when it once was shadowed, the walls, columns, and soaring ceilings painted in colors that dispel the gloom I’d recalled. The tabernacle is centered high and prominent behind the altar, which in a lingering old–New World touch is fronted by banks of electric, coin-fed votive candles. The pews and floors shine brightly, while the kneelers, appealingly upholstered in burgundy, move silently on their hinges. Restored stained-glass windows alongside the western side of the church filter the light of the lowering sun, which falls in soft bands on the life-sized plaster icons: Our Lady of Sorrows pierced by a dagger, the Infant of Prague, Cosmos and Damian, Our Ladies of Mt. Carmel and the Letters, Frances Cabrini, Maria di Lauro, and Pope John Paul II with staff and mitre. Also, St. Joseph, whom one woman had just thanked “for helping out with that thing with Louie,” as I overheard her reveal to a companion.

Then the Karaoke machine was cranked up for two verses of “Lift High the Cross,” for which nobody stuck around.
sharetweet

I sat toward the front, set the bulletin and missal and hymnal down, and waited for the pews to fill, if only a little, around me. Soon there were maybe half-a-dozen other people, no one close by, yet the murmuring and whispering suggested a larger crowd, and turning around I saw that the back half of the church was almost full. So it goes. But the mood seemed good—none of the scowls or grimaces or blank stares I’d recalled. Yes, the gathered skewed thoroughly older, and white. There were perhaps two or three families with school-aged children. There were no teens or young singles (or even young marrieds) as far as I could tell.

Mass began promptly on time with a procession—Ghanese celebrant, female altar server, bow-tied lector—out of the sacristy, down the eastern aisle, and then up the center aisle. The opening hymn was “Canticle of the Sun” (two verses), and its performance felt oddly canned, like those anodyne renditions you hear sometimes in religious programming. Few attendees seemed to be singing, yet the vocals were loud and full, and I thought there must have been a recording playing over the speakers. But up in the loft were a live organist and a cantor; maybe a harmonizer was being used to create the choral effect.

Hymn complete, celebrant at the microphone, we were invited to introduce ourselves to those around us: another gesture of welcome, but with so many pews separating me from others I couldn’t even catch anyone’s eye. Things unfolded in familiar fashion from there, although the sung Gloria from the Mass of Christ the Savior had that same canned, Karaoke-like sound.

Then came the readings. I tend to prefer a relatively straightforward style, expressive but not emotive, reserved but not wooden. The bow-tied lector proceeded as if reciting a sponsor’s message in a 1930s radio broadcast—an interesting choice for the verses from Jeremiah. He modulated his tone for the reading from Paul, then dutifully gave way to the celebrant for the Gospel verses from Mark. There was a lively, reassuring tone to his delivery, if at times it felt pitched in a way to appeal to children. The homily that followed began as a rousing address about the persecution to which believers are subject, and ended as a comforting bedtime story; “sparrows” were mentioned often. But at least there was no reference to the Fortnight for Freedom, and its brevity could be said to have compensated for its shortcomings. Not that some of the people around me would have noticed: they read their bulletins or busied themselves with its inserts, including the liturgical word-find seemingly meant for children.

The recitation of the Nicene Creed was spirited. The intentions included a prayer for all who suffer religious persecution (“Christians, Jews, and Muslims in this country”). Then the Mass hastened toward its conclusion through the Second Eucharistic prayer, during which the entire congregation made use of the plush, silently unfolding kneelers (at the parish I belong to, almost everyone remains standing). The sharing of peace was energetic, though with so few people around me I was able to reach just a single outstretched hand. Only one species of Communion was offered, with a separate pair of Eucharistic ministers dispatched to the back half of the church, speeding everything along further still. That, of course, is part of the attraction of the summer Saturday vigil, and things seemed set to wrap up in a tidy forty-five minutes, except that the pastor himself then materialized to deliver the announcements. He came off as a friendly sort, his round silver glasses and neat white mustache contributing to his warm, grandfatherly demeanor. But he spoke a little too lengthily on his threat to discontinue the use of bulletin inserts (had he seen people doing the word-find?), even as he exhorted parishioners to keep up with the news by...“reading the bulletin.” That everyone joined in reciting this last bit along with him suggested it is something of a weekly routine. Then the Karaoke machine was cranked up for two verses of “Lift High the Cross,” for which nobody stuck around.

Almost a decade ago, novelist Colm Tóibín spoke of the solace he found in attending Mass at another nearby parish, having become familiar with it while writing his novel Brooklyn. Among other things, he recounted his walks through the surrounding streets after Mass ended. I find myself thinking of this often, and was prompted to do so again after leaving the Saturday vigil. The parishioners may not have stayed in their pews for the final hymn, but there they were on the front steps of the church, sharing greetings and chatting with one another. Then they gradually parted ways, disappearing in different directions, crossing streets, rounding corners—still a presence in this changing neighborhood, yet, I couldn’t help but feel, someday to be swallowed up by it.