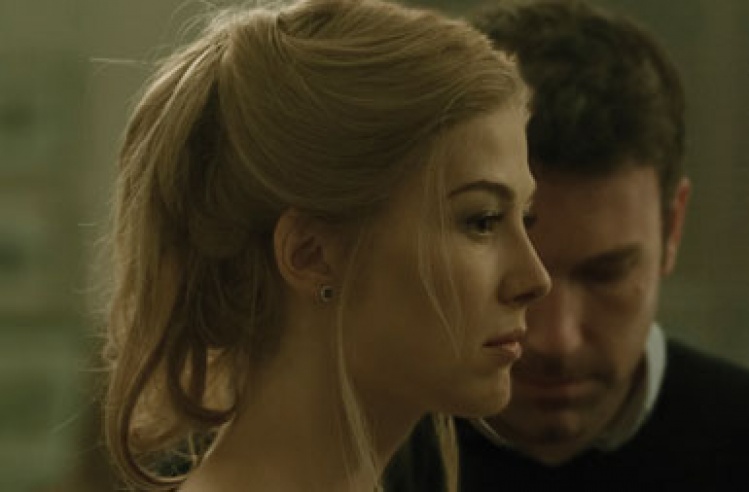 Like the best-selling novel it’s based on, Gone Girl proceeds on three levels. First, it is a mystery story replete with clues, stratagems, lies, alibis true and false, detective work, innocent and guilty suspects, canny lawyering, and everything else you would see in an episode of Law and Order. Second, it is the portrait of a marriage so riddled with hypocrisy and bile that it would send Ingmar Bergman screaming out of the theater and into the nearest bar to share a drink with August Strindberg. Finally, it is a satire about the way today’s all-enveloping media mock justice.

Every mystery story leaves loose ends; the test of its success is whether you shrug them off or roll your eyes in disbelief. For me at least, Gone Girl is sheer eye-roller. To summarize the plot is to tiptoe through a minefield of spoilers. Nick and Amy Dunn (Ben Affleck and Rosamund Pike)—a golden couple whose careers as trendy magazine writers in New York have been squashed by the 2008 recession—retreat to Nick’s native Missouri, where he opens a very untrendy bar and she, a cool semi-bohemian, begins to feel humiliated by their exile to the flyover ordinariness of the Midwest. One day, Nick comes home to find the front door open and signs of violence in the living room. When the cops show up, however, they find evidence suggesting the scene was fabricated by Nick. Almost immediately, they suspect he’s trying to disguise a murder as a kidnapping.

But if the girl really is gone, not dead, then where is she and what is the ultimate aim of her kidnappers? My problem with both the novel and the movie (scripted by the book’s author, Gillian Flynn) is that when the real scheme is finally revealed halfway into the story, it seems so arduous and complicated that I had trouble believing that either of the two soft, comfort-loving yuppie protagonists would have had the nerve or resourcefulness to pull it off. Also, the later stages of the plot involve a murder that would require the skill and coolness of a Hannibal Lecter; a first-time killer probably wouldn’t be up to it. Reading the novel, I was too constantly aware of the author straining for cleverness when I should have been enjoying the cleverness of the fictional mastermind. In this regard, the movie is a little better, since director David Fincher paces the action so well that we don’t have time to count loose ends or entertain doubts until after the final credits roll.

On the film’s second level—its portrait of a bad marriage—Gone Girl is definitely compelling but not quite satisfying. Here we have the union of two attractive phonies who have mistaken each other for the real thing. Nick, despite his lowbrow cultural tastes, has developed enough glibness to reinforce his good looks and convince Amy that her husband is the ultimate in cool masculinity. But she, too, is a self-invention, modeled on “Amazing Amy,” the heroine of a series of kids’ books written by her own parents (played to smarmy perfection by Lisa Banes and David Clennon). Each spouse has embraced a mirage and, finding it un-real, has reacted bitterly. With his aging frat-boy looks, unreadable eyes, somewhat slack jaw, and listless manner of speaking, Ben Affleck is perfectly cast as Nick. He keeps our opinion of the character in a state of suspension. Are we looking at a bewildered small-town boy who’s in over his head or at a psychopath? Rosamund Pike is a revelation as Amy. A British actress who has previously appeared either in supporting roles in mainstream movies (Pride and Prejudice, Die Another Day) or in leading roles in little-seen independent features, she now gains stardom in a part that brings out the flavor of her personality. Like Katharine Hepburn, Pike has the high cheekbones and striding confidence of the patrician wasp, a confidence essential to Amazing Amy. Even in the film’s best moments, however, Amy and Nick remain showy roles for skilled actors, not truly interesting characters with convincing inner lives.

But on the third level—as satire of a country hypnotized by the media’s presentation of true crimes as serialized melodramas—Gone Girl is superb. Whether Nick is innocent or guilty, it soon becomes clear that he’s undergoing a pre-trial trial in the electronic courtroom of the Internet and television, and that his brand of charm, however effective with women at café tables and in bedrooms, isn’t cutting it with bloggers and Nancy Grace–type commentators. One scene in particular perfectly conveys the bumpiness of his ride through the popular consciousness. Nick is addressing a crowd gathered to express support for his missing wife. At first he speaks with confidence, winning his fellow townspeople over by denouncing the media’s city-slicker contempt for unsophisticated Missouri ways. Then, just as the applause is dying down, a pregnant woman with a baby in her arms demands that he reveal what he really did to his wife. Nick, flustered, breaks down and retreats to his car, chased by reporters and photographers. And so a million screens will show images that present him as a murderous rat scuttling into the shadows.

Many movies (Network, Notting Hill, Chicago) have depicted the fickleness of media celebrity and notoriety, but few have done so as effectively as Gone Girl. The satire is merely one thread in the film’s fabric, but it’s the best thread. As suspense and marital drama, the film doesn’t always convince, but it remains worth seeing as a black comedy of big American expectations and bigger American disappointment.